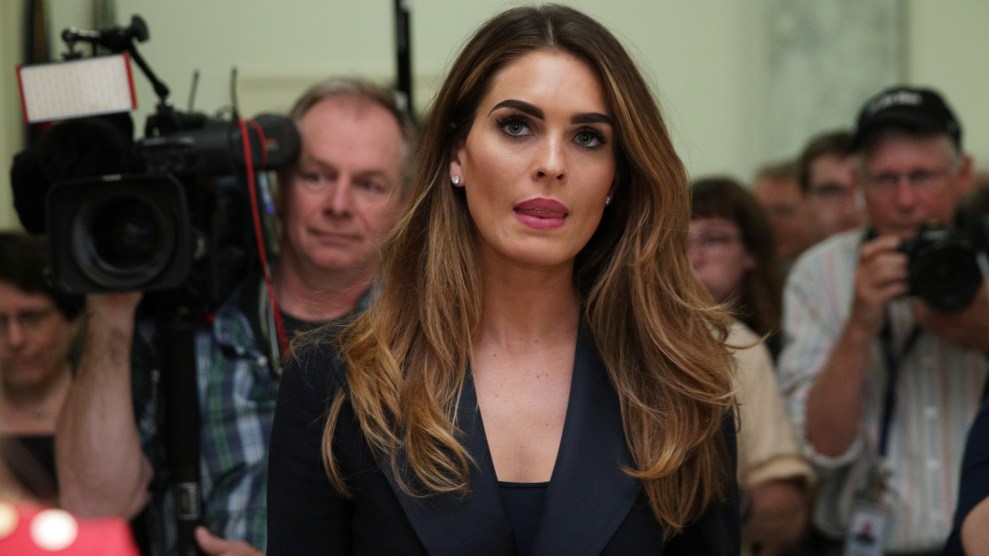 Hope Hicks leaves the hearing room during a break at a closed-door interview with the House Judiciary Committee on June 19, 2019.Alex Wong/Getty Images

Don’t forget the lying. Despite the debates over the extent of the contacts between Donald Trump’s 2016 campaign and Russia, over the allegations that the president obstructed justice, and over the issue of whether Congress ought to impeach him, special counsel Robert Mueller’s report reached an indisputable conclusion that Trump, his aides, and his family lied often and profoundly about their interactions with Russia during the 2016 election. This dishonesty has been routinely overlooked in the post-Mueller media storm. And last week, during her closed-door interview with the House Judiciary Committee, Hope Hicks, while refusing to answer scores of questions, made a little-noticed remark that suggested Trump’s son-in-law, Jared Kushner, had lied to Hicks to hide one of the most suspicious and problematic contacts between the Trump campaign and Russia. With her testimony, Hicks implicated Kushner in an attempted cover-up.

This all goes back to two days after Trump’s election victory, when Russian Deputy Foreign Minister Sergei Ryabkov told a Russian news agency that “there were contacts” between the Russian government and the Trump campaign during the election. Hicks, acting as Trump’s chief spokesperson, denied this. “It never happened,” she told the Associated Press. “There was no communication between the campaign and any foreign entity during the campaign.”

During her private interview on Capitol Hill last week—the transcript was released the next day—Hicks told Rep. Madeleine Dean (D-Pa.) that she was “very surprised” to learn there were more than 100 contacts between the Trump campaign and Russia. (The figure may be closer to 300.) Hicks asserted she had not knowingly lied when she issued that blanket denial right after the election. And she asserted that before she had responded to Ryabkov’s comment she had checked in with “senior officials” on the Trump campaign to determine what she should say. Those officials told her that “there were no contacts,” Hicks recalled.

“And who was it that told you there were no contacts?” Dean asked. Hicks replied, “I believe I spoke to several people. Jason Miller [a spokesperson for the Trump campaign], Jared Kushner.” She added, “I believe Jason Miller may have reached out to Kellyanne Conway and Steve Bannon.” In an interview with Mueller’s team, Hicks said that after making the “no communication” comment to the Associated Press, she spoke with Conway, Jason Miller, Stephen Miller, and, according to the report, “probably Kushner and Bannon” to ensure her statement was accurate, and that there had been no hesitation or pushback from any of them. None of these people appear to have commented on Hicks’ testimony.

Kushner’s involvement in either a pre- or post-comment discussion is especially noteworthy. There is no question that he knew of significant contact between the Trump campaign and Russia, since he attended the private June 2016 meeting at Trump Tower where Russian lawyer Natalia Veselnitskaya was supposed to offer him, Donald Trump Jr., and campaign chair Paul Manafort dirt on Hillary Clinton as part of a secret Russian government plot to help Trump’s campaign. Shortly before this meeting, Kushner had received an email—with the subject heading “FW: Russia – Clinton – private and confidential”—that said: “This is obviously very high level and sensitive information but is part of Russia and its government’s support for Mr. Trump.” (News of this meeting would not appear publicly until the year after the election.)

That wasn’t all. Kushner knew of a “backdoor overture,” as one campaign aide put it, by Alexander Torshin, the deputy governor of the Russian central bank with reputed links to Russian organized crime, to set up a meeting between Russian President Vladimir Putin and Trump. Kushner later noted he had rebuffed the effort, but Torshin still managed to meet with Trump Jr. during the National Rifle Association’s 2016 annual meeting in Louisville, Kentucky.

With a direct role in the Trump Tower meeting and knowledge of Torshin’s overture to the Trump campaign, Kushner was certainly aware that there had been contacts between Russia and the Trump campaign—and he presumably knew it would be false to claim, as Hicks did, that there had been none. So if Hicks’ testimony is accurate—that she checked with Kushner on her blanket denial—that would mean that Kushner misled her and that he bears responsibility for one of the biggest lies Trump and company told. Hicks’ account suggests that Kushner, in the wake of Trump’s victory, tried to prevent the truth from emerging and helped fashion one of the earliest expressions of the Trump team’s false and misleading cover story.