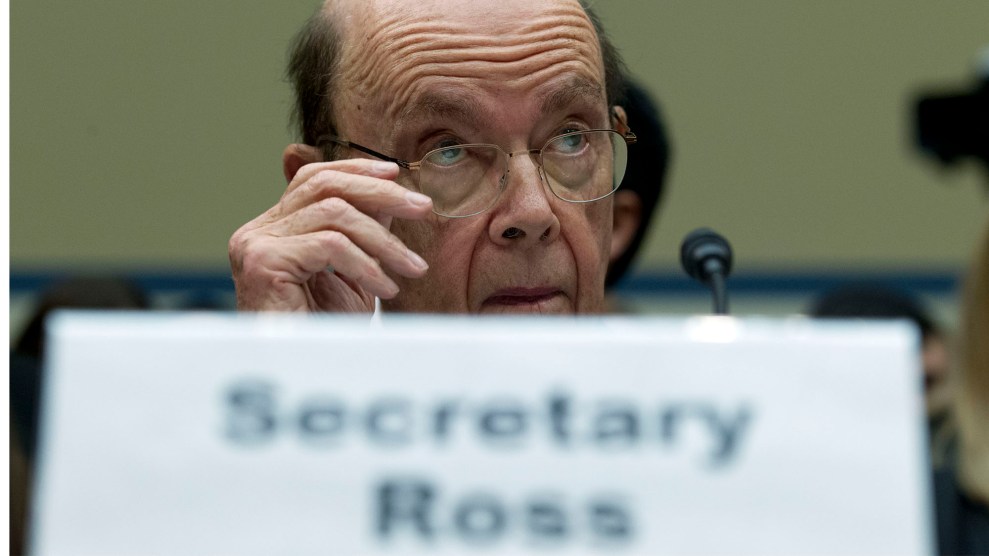 The House Oversight Committee voted on Wednesday to hold Attorney General William Barr and Commerce Secretary Wilbur Ross in contempt of Congress for withholding key documents about why the Trump administration added a controversial question about citizenship to the 2020 census. The resolution passed by a vote of 24-15, with every Democrat and Rep. Justin Amash (R-Mich.) voting for it. It recommends that the House of Representatives begin civil and criminal proceedings to enforce subpoenas authorized by the committee in April. Prior to the vote, President Donald Trump invoked executive privilege to shield the documents the committee is requesting from public view, escalating the administration’s battle with House Democrats.

The Supreme Court is expected to rule on the legality of the citizenship question later this month, but the Oversight Committee has launched its own investigation into how the question was added to the 2020 census. Democrats accuse Barr and Ross of failing to provide key documents that would shed light on the origins of the question. Even in the absence of those documents, statements from administration officials and newly discovered files have revealed that Ross and other officials lied about the reasons for adding the question, which was actually intended to suppress the influence of Latinos and other minority groups and give Republicans a political boost. Oversight Chairman Elijah Cummings (D-Md.) has called the administration’s actions “one of the most unprecedented cover-ups since Watergate.” Now, House Democrats are hoping to put pressure on the administration to release the documents or to get a federal court to order their release.

“What we have learned so far in this investigation is quite disturbing,” Cummings said at the hearing. He called Trump’s invocation of executive privilege “another example of the Trump administration’s blanket defiance of Congress’ constitutionally-mandated responsibilities.” He added, “This begs the question: What is being hidden?”

Ross said he approved the addition of the citizenship question in March 2018 after the Justice Department requested it in order to better enforce the Voting Rights Act. But evidence released at the federal trial and during the committee’s investigation has contradicted Ross’ claims. Ross, not the Justice Department, first lobbied for the addition of the question, and he discussed it with top figures at the White House, including Steve Bannon, despite initially claiming otherwise. In late May, newly uncovered documents revealed that Tom Hofeller, the GOP’s longtime gerrymandering mastermind, had written a memo finding that a citizenship question would be “advantageous to Republicans and Non-Hispanic Whites.” The documents also showed that Hofeller had ghostwritten part of the Justice Department’s letter requesting the question. Hofeller told Trump administration officials to say that the question was needed to enforce the Voting Rights Act, even though his research had already concluded that it would reduce the political influence of Latinos and other minority groups.

A report from Oversight Committee Democrats accompanying the contempt resolution says that the administration has “obstructed and delayed the Committee’s investigation.” Last week, Cummings released a memo showing that the White House had ordered Kris Kobach, the former Kansas secretary of state and vice chair of Trump’s now-defunct election integrity commission, not to answer questions from the committee. Kobach talked to the committee anyway on May 21 and said he had discussed adding a citizenship question with the Trump campaign during the 2016 election and had met with Trump, Bannon, and then–chief of staff Reince Preibus shortly after the inauguration to follow up on the idea, further undercutting Ross’ account of how the question was approved. Kobach, the leading architect of laws restricting immigration and ballot access, then wrote to Ross in July 2017 “at the direction of Steve Bannon” and said it was “essential” that the citizenship question be added to the census.

“I want to know why this question was magically added after we have seen that a political operative knew and detailed an intent to intimidate racial and immigrant communities for a partisan purpose, saying this will hurt Democrats and help Republicans,” Rep. Alexandria Ocasio-Cortez (D-N.Y) said at the hearing. “I want to know why people like Kris Kobach, with a résumé of voter suppression techniques in the state of Kansas—I want to know why folks like that have their fingerprints all over the most sensitive census operations that we have as a government. This determines who has power in the United States of America.”