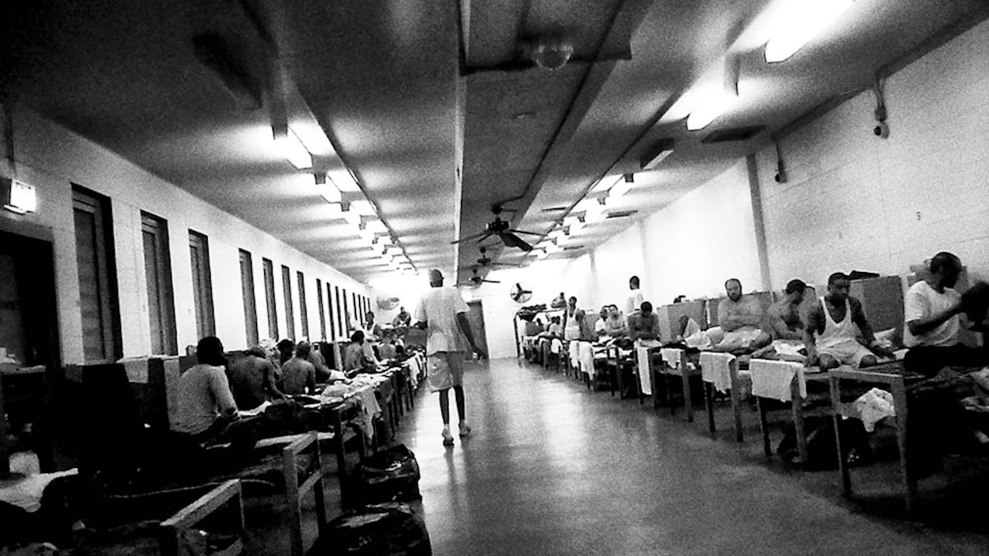 Inmates on cots at Winn Correctional Center in Louisiana while Mother Jones' Shane Bauer worked there as a guard.Shane Bauer/Mother Jones

In 2016, Mother Jones reporter Shane Bauer took readers inside a Louisiana private prison where he spent four months working as a guard. His award-winning investigation exposed a dehumanizing institution plagued by rampant violence and medical neglect. Now the Trump administration is using the same facility to detain asylum-seekers who seek protection at the southern border.

Mother Jones reported last month that since February, Immigration and Customs Enforcement had started using three Louisiana jails run by the private prison company LaSalle Corrections to house asylum-seekers. ICE added a fourth LaSalle facility this month: the Winn Correctional Center, which was operated by the Corrections Corporation of America (since renamed CoreCivic) when Bauer worked there. The management has changed, but it is still a prison designed to hold convicted criminals, not foreigners fleeing violence, persecution, and poverty.

Winn is currently holding about 1,500 people, including both immigrants and criminals. ICE spokesman Bryan Cox confirmed that the agency began using the facility this month but did not say how many immigrants are or will ultimately be detained there. Marshall Goff, an attorney with the Mississippi law firm Chhabra & Gibbs, says a Winn prison official told him that more than 1,000 immigrants are expected to be held there soon.

The prison, which is more than four hours from both Houston and New Orleans, is in the “middle of absolute nowhere,” Goff says. When he visited for the first time on Saturday, it was clear to him that it was designed to be a prison, not a jail that holds people serving short sentences. It was striking to Goff that immigrants, who are held in a separate area of the prison, “are being housed in the same place as people who commit felonies and who’ve been sentenced for decades.” His overall impression was that everything was being done “on the fly.” Corrections Corporation of America logos, he said, are still all over the facility.

On Facebook, a woman whose profile identifies her as an accounting clerk at Winn, wrote in late May that the facility would soon hold about 1,400 immigrants once criminals were removed to make space for them. She worried that “illegal immigrants” could bring tuberculosis and implied that they might escape because “they are already good at jumping fences.” (Asylum-seekers generally arrive not clandestinely but by coming to official border crossings, where they are made to wait for weeks by US officials, or turning themselves in to Border Patrol agents.)

Under Trump, ICE is increasingly contracting with local jails and private prisons around the country to house migrants since its own detention centers don’t have enough capacity to hold the people it detains. In Louisiana, the agency has hugely expanded its presence, causing many migrants to be sent from the border to remote parts of the state. This expansion could allow ICE to detain more than 7,000 people at a time in Louisiana, more than triple its capacity in 2016. Only Texas has more immigration detention space.

Louisiana is one of the worst places in the country for immigrants to be detained, since attorneys are in short supply, the state’s judges are among the toughest in the nation, and ICE’s regional office denies nearly everyone’s applications to be released from detention. ICE was detaining roughly 53,000 people last week nationwide, even though Congress has told it to go back to detaining about 40,000 people by September.

ICE’s New Orleans office, which covers Louisiana and four other Southern states, is the least likely of any regional office to release asylum-seekers from detention while they’re awaiting their hearings in immigration court. Last year, it released just 1.5 percent of migrants seeking parole—down from 75.9 percent in 2016. The Southern Poverty Law Center and American Civil Liberties Union of Louisiana are now suing ICE to force the New Orleans office to follow the agency’s own parole policy, which requires people to be released if they don’t pose a threat to public safety or a flight risk.

As Bauer wrote in 2016, the jail provides an important source of revenue and jobs in an area where nearly 30 percent of people live below the poverty line. LaSalle is looking to hire bilingual detention officers to work at Winn for $19.44 an hour. Applicants, according to a job posting, must be “emotionally stable,” drug free, and speak Spanish or other foreign languages.

Goff and other attorneys have been told that immigrants at Winn will have their cases heard by judges in the Justice Department’s Otero, New Mexico, immigration court via videoconference feeds. Asylum-seekers at other LaSalle jails are going before judges in Virginia and upstate New York, since the swelling number of detainees in Louisiana exceeds the capacity of immigration judges in the state to hear their cases.