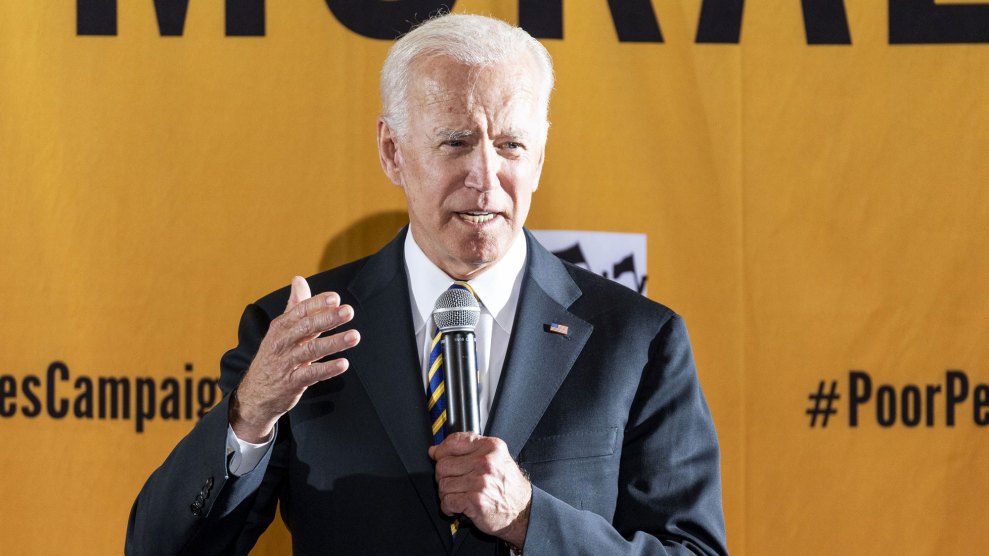 On Tuesday night, former Vice President Joe Biden told a room full of wealthy New York donors about the good old days. When he first arrived in the Senate in the 1970s, Biden recalled, he joined a Democratic caucus that included staunch segregationists, such as Herman Talmadge of Georgia and James Eastland of Mississippi.

“He never called me boy, he always called me son,” Biden said of Eastland, before describing Talmadge as “one of the meanest guys I ever knew.”

Biden has offered variations on this lesson many times. He eulogized segregationist Strom Thurmond at the South Carolina senator’s 2003 funeral. He wrote of his courtship of Eastland and fellow Mississippian John Stennis in his 2007 memoir, Promises to Keep. At a 2017 Alabama rally in support of now-Sen. Doug Jones, Biden described his past relationship with “seven or eight old-fashioned Democratic segregationists”—including Eastland—as evidence of a collegiality that was now sorely missed. “You’d get up and you’d argue like the devil with them,” he said. “Then you’d go down and have lunch or dinner together. The political system worked. We were divided on issues, but the political system worked.”

In the past, when Biden has gotten in trouble for statements he has made, they have tended to be categorized as “gaffes.” But when it comes to the segregationists of his early years, Biden has repeated himself so often that there should be little ambiguity about whether he is, in fact, saying what he means. His words come from the very soul of his political identity. He believes that finding common ground with the Eastlands of the world, even when you disagree on Serious Things, is what politics is all about.

His rivals are starting to notice. New York City mayor Bill de Blasio, a longshot Democratic presidential candidate, landed one of the first punches against Biden. Eastland, de Blasio wrote in a Tweet on Wednesday, “thought my multiracial family should be illegal”:

It’s 2019 & @JoeBiden is longing for the good old days of “civility” typified by James Eastland. Eastland thought my multiracial family should be illegal & that whites were entitled to “the pursuit of dead n*ggers." (1/2) pic.twitter.com/yoOOkpaTX2

There’s a dispute about whether Eastland ever actually said the words quoted in de Blasio’s tweet, but Eastland’s career was the embodiment of a white supremacy enforced through violence. He intimated that civil rights workers murdered in Philadelphia, Mississippi, were faking their deaths for publicity; argued that Brown v. Board of Education—the landmark Supreme Court case outlawing school segregation—was a monstrosity; and said that interracial marriage would diminish the “purity” of the “Caucasian bloodstream” that made America great.

That Biden was able to work with Eastland speaks, perhaps, to a certain aptitude at legislative negotiations on his part. But mostly it’s a product of what “we” meant in the context of the United States Senate in 1973. Eastland called him “son” and not “boy” because Biden was white, and for that same reason, they were able to put aside their differences and work together to fight, well, the desegregation of public schools via mandatory busing. As Sen. Kamala Harris (D-Calif.) said Wednesday, working civilly with Eastland was a privilege reserved for white men.

Kamala Harris on Joe Biden’s remarks about working with segregationists in the Senate: “It concerns me deeply. If those men had their way I wouldn’t be in the United States Senate and on this elevator right now.”

NEW… JIM CLYBURN leaps to Biden’s defense on talking about working segregationists. Says Biden didn’t say anything different than what describes his work with Strom Thurmond.

Clyburn, a few days ahead of his marquee Fish Fry in Columbia, which Biden will attend, was being generous to the former vice president. Because what Biden was saying wasn’t just that he could work with the likes of Eastland in spite it all. He was saying that in some curious way, politics worked better back then—at a time when segregationists controlled committees and a total of zero senators were women. He was expressing a nostalgia for a world many of his fellow candidates could never be a part of. They’re not likely to let him forget it.