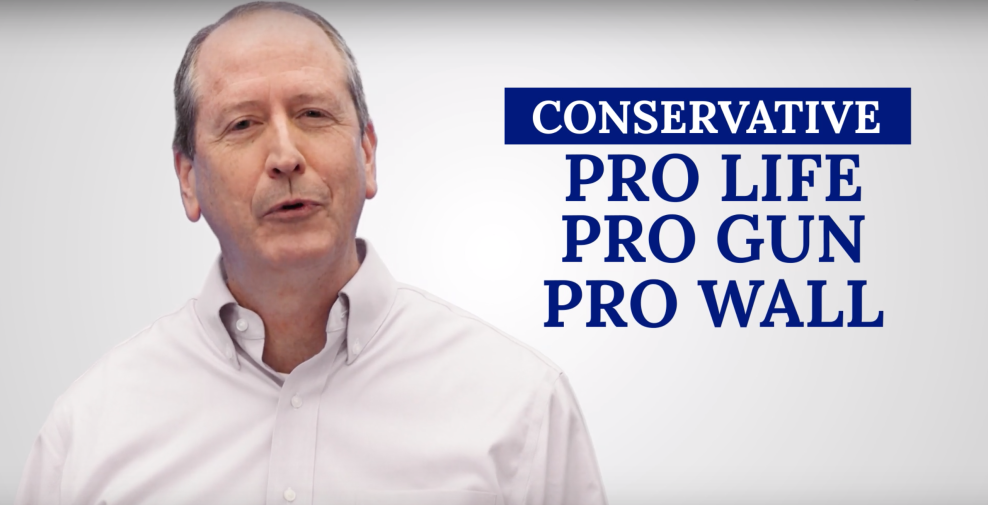 In his ads, Dan Bishop wants everyone to remember what the "Right Dan" stands for.A still from Dan Bishop's campaign ad / YouTube

Voters in North Carolina’s 9th District may be a bit exhausted by their democratic duty. They’ve been voting to decide the 2018 midterm election—if you include primaries—for more than a year. The last undecided race from the 2018 midterms that’s been mired in allegations of election fraud is now being completely rerun, sending voters back to the polls one more time in September to consider one of the previous candidates, and one new one, both named Dan. (At Mother Jones, we are aware of the problem of Way Too Many Dans, too.)

For Democrats, Dan McCready reentered the race; for Republicans, after preacher Mark Harris dropped out, state Sen. Dan Bishop snagged the nomination—and quickly got a coveted presidential endorsement via Twitter (random capitalizations and all):

Congratulations to Dan Bishop on his big Republican Primary victory in the 9th Congressional District of North Carolina. Dan is strong on Crime, Loves our Military, Vets, 2A, and great Healthcare. He has my Complete and Total Endorsement! #MAGA

While Bishop is the new candidate in the redo race, he is far from new to North Carolina politics and has left a long paper trail. Here are five key facts about Bishop, who one Republican pollster recently showed with a slight edge at 46 percent to McCready’s 42 percent.

1. He sponsored a landmark of transphobic discrimination—that potentially hurt the economy, too

Bishop is perhaps best-known nationally as the lead sponsor of House Bill 2, the state’s so-called “bathroom bill”—the 2016 law that barred transgender individuals from using the bathroom aligned with their gender identities. He’s spent a lot of time defending it and even using it to propel his political aims. “[T]hey want to make us into a national example—SO THAT NO ONE WILL EVER STAND UP to the radical transgender agenda again,” he wrote in a fundraising message. (Capitalization his.)

In private, he’s been even more vociferous. According to a local news report from June 2016, a supporter emailed Bishop to push him not to “cave in to the Politically Correct Taliban!” and said Bishop should work to “coordinate” with other “sane states” to help them pass bills similar to HB 2. Bishop replied enthusiastically: “I LOVE that idea. Taliban. Love that too. Not giving up. Ever.”

While Bishop touted the bill on CNN—with a wide grin—as simply a “common sense” measure, others strongly disagreed with that assessment. Multiple states issued travel bans to North Carolina; the NCAA basketball tournament and the NBA pulled out of events in the state; entertainers from Bruce Springsteen to Cirque du Soleil canceled performances. Protesters shouted “Shame!” at the then-governor, Republican Pat McCrory. (After that incident Bishop recommended a law to make it a crime to “threaten, intimidate, or retaliate against a present or former North Carolina official.”) The Associated Press estimated HB 2 would cost the state $3.76 billion over a dozen years.

In 2017, the law was partially repealed after the election of Democratic Gov. Roy Cooper—but tourism officials said that still hasn’t led to a full recovery of the state’s image. Bishop has tried to counter his connection to the economic consequences of HB 2 during this run.

2. He regularly misrepresents abortion as “infanticide”

Bishop has spoken often about his anti-abortion beliefs. During his primary campaign earlier this year, he bragged that he cast the “deciding vote” on what other pro-lifers called the “Born Alive” bill to override a veto by Gov. Cooper. The bill claims to protect infants born during abortion procedures—even though infants are already protected by multiple state and federal laws regardless of birth circumstances, and cases of this nature are exceedingly rare, at most. The bill would penalize physicians with potential prison time and fines up to $250,000. After Cooper’s veto, he tweeted that a late-term abortion is a “‘Right To Choose’ Infanticide.”

The attack conflating “infanticide” with abortion has become something of a regular refrain. A recent ad from his campaign attacks McCready for “fighting to legalize late-term abortion, even infanticide,” and he tweeted in March that Democrats support “infanticide.”

He sponsored another bill this year, SB 547, which would have prohibited abortion if “an unborn child [is] capable of feeling pain”—which the potential law pegged at 20 weeks—”unless necessary to prevent a serious health risk to the unborn child’s mother.” Bishop also recently introduced a “right-to-know” bill that would guarantee parents can see material taught in sex-ed classes and require parental consent in advance of such classes.

Finally, just so you weren’t confused: Bishop made sure to compare Roe v. Wade to the Dred Scott decision, which said that African Americans could not be US citizens.

3. He has rich friends

Bishop raised the most money of any contender in a crowded Republican primary this year—nearly $400,000. Plus, he got $78,580 in ad help from the Club for Growth, a conservative super-PAC, which ran ads against his closest opponent in the primary. His war chest is now more than $500,000.

Recently, a 10-minute video of stock footage was uploaded to his YouTube page, which features Bishop petting his dog, talking with constituents, and posing alone in a field. There is no audio.

The idea behind this incredibly long, incredibly awkward video is that such a reel invites super-PACs to use these anodyne images of Bishop to create advertisements technically without coordinating with his campaign.

4. He wanted to flee “SF thought police” and promote Gab

Bishop got in hot water a few years ago for being an early investor in Gab—a social media site created for the far right to skirt any monitoring of hate speech. He’s apologized, said he doesn’t use the website, and cautioned that it was only a “crowdfunding investment.”

My statement on Gab: pic.twitter.com/3nZZUa2JyT

He does, however, enjoy using other social media channels with a Trumpian flare. Bishop has used the term “jihad media,” referencing an article about a budget cut to a Democrat’s office, and he’s compared Black Lives Matter to white nationalist protesters in Charlottesville.

And when he invested in Gab, he complained of the “SF thought police tech giants.”

So, I'm about done with SF thought police tech giants, and so … I just invested in Gab https://t.co/D3xM9Aoh8V via @StartEngineLA

5. He loves talking about the two Dans. But his first name isn’t actually Dan.

One of the Republican’s biggest selling points seems to be his name, which is, yes, the same as his opponent’s and has allowed Bishop to repeatedly mimic a parent speaking to a small child: He points at himself (Right Dan) and then his opponent (Wrong Dan).

Here’s a recent example: His newest ad proclaims, “There are two Dans in this election.”

See, simple as that!

But, on closer inspection, there is a wrinkle: Bishop’s first name is actually James.

Bishop began his political career on the Charlotte Board of Commissioners, and, at the time, went by J. Daniel Bishop, which, to be fair, doesn’t exactly sound like a man of the people. As he rose through North Carolina politics to the state legislature, he shed the “J.” Then off came the “-iel.” Now, he is simply Dan Bishop—someone who silently laughs while he hangs with his dog in a video for a super-PAC.

Even so, the double-Dan coincidence has been something of a slogan for the Bishop campaign:

I’m the Right Dan in this race and I don’t. Do you and your friends?… https://t.co/ehGUhrOdS4

Hey @McCreadyForNC (aka #WrongDan), did you skip out on crazy commie Bernie cuz you are waiting for Elizabeth Warren? Or just can’t decide? #ImWithTrump #nc09 #ncpol

It’s unclear if Dan Bishop thinks it’s confusing that two people can be named Dan in a single election. Or maybe this is a misplaced attempt to conquer his lifelong regret of ever having James as a name at all. Whatever the case: A man named James is going to talk a lot about being named Dan for the next few months in North Carolina.