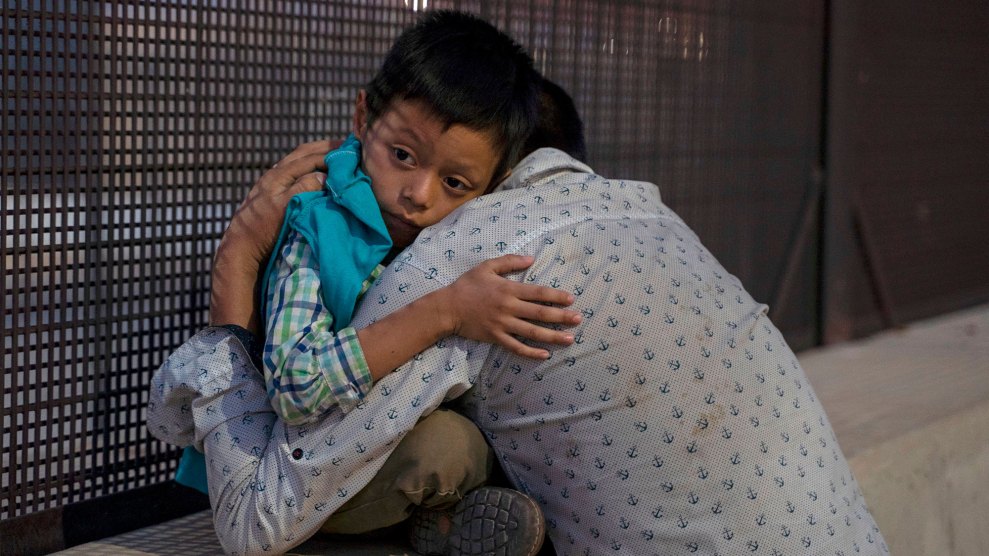 José, 27, embraces his son, José Daniel, 6, after crossing the border into El Paso on May 16. Both spent a month trekking across Mexico from Guatemala. Paul Ratje/Getty

As it struggles to stem the flow of migrant families streaming to the southern US border, the Trump administration appears to be settling on a new way of questioning the legitimacy of the migrants: Many of those families, officials claim, are not actually families.

In a congressional hearing on Tuesday, Acting Secretary of Homeland Security Kevin McAleenan repeatedly raised the specter of fraudulent Central American families crossing the border. McAleenan said Customs and Border Protection is seeing “enormous numbers of fraudulent cases”—4,800 so far this fiscal year. That number is well under 1 percent of the more than 600,000 people encountered by immigration officials at the US border this year—and even that figure may overstate the issue. As Mother Jones has reported, only parents or legal guardians and their children count as families under Department of Homeland Security standards. So migrants traveling with siblings, in-laws, and grandchildren under 18 may have been included in the fraud statistics.

Single adults arriving at the US border to seek asylum can be detained indefinitely while they await a hearing on their asylum claim. But families with minor children can’t be detained for more than about 20 days, under the 1997 government settlement known as the Flores agreement. That’s led some Republican lawmakers and immigration officials to claim that large numbers of migrants are paying to “rent” children who are not actually their own in order to avoid prolonged detention and have a better shot at staying in the United States.

From October 2018 to May 2019, CBP apprehended 332,981 people traveling as families at the US-Mexico border—a 463 percent increase from the same period last year. McAleenan told the Senate Judiciary Committee that smugglers are campaigning all over Central America via social media, radio commercials, and flyers, with a message of “if you bring a child, you will not be deported.”

Last month, the Trump administration said it would conduct DNA tests on up to 100,000 migrants asking for asylum who CBP officers suspected were falsely claiming to be a family. McAleenan testified that during a three-day pilot program, Border Patrol tested 109 people suspected of lying about the children traveling with them. According to the test results, 17 those people were not the biological parents of the children accompanying them.

“There is no excuse for misrepresenting a child as your own in an effort to defraud anyone in our country,” Sen. Dick Durbin (D-Ill.) said at the hearing. “But this notion that we can somehow dismiss the [other] 85 percent of children because some are abusing that representation troubles me greatly.”

McAleenan said there was a need for “narrow and targeted changes to our laws that will restore integrity to the immigration system and will remove the incentives for families and children to cross our border illegally.” Throughout the hearing, he showed support for legislation proposed by Sen. Lindsey Graham (R-S.C.) that would allow children to be detained by CBP for up to 100 days and would force Central American families to apply for asylum in Mexico, before they reach the US border.

“So if we made those two changes,” Graham asked, “do you think 90 percent of this flow from Central America would stop overnight?”

“I believe the vast majority would stop, between 70 and 90 percent would stop, yes,” McAleenan responded.

Last week, Mexico agreed to take in more asylum-seekers a Trump administration policy that sends non-Mexicans seeking asylum back to Mexican border towns to wait for months until their day in US immigration court. Mexico has received more than 11,000 Central American migrants under this policy since January. As part of the agreement reached between the United States and Mexico, the number is likely to triple, and Mexican officials say they will assist those migrants with health care and job placement in border towns that are already overwhelmed with the number of migrants waiting for asylum. Mexico also says it will strengthen enforcement at its border with Guatemala. But it did not consent to an agreement that would force Central American families to seek asylum in Mexico rather than in the United States.

The Trump administration’s whiplash-inducing series of radical proposals to crack down on immigration has led some immigration experts to theorize that ever-larger numbers of migrants are strategically coming to the border now, before the administration succeeds in enacting a policy that will make it harder for them. Sen. Amy Klobuchar (D-Minn.) asked McAleenan about this theory. McAleenan rejected the notion, doubling down on his claim that it’s loopholes in US law and not Trump’s policies and rhetoric that are behind the high number of families at the border.