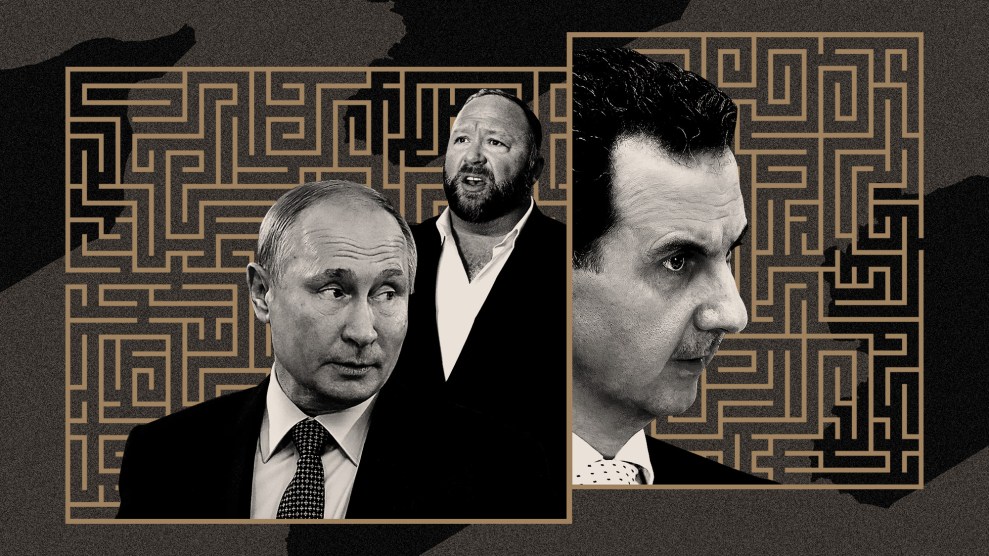 Among Syrian President Bashar al-Assad’s most reliable allies are the armies of Twitter bots, trolls, and digital defenders who have been quick to spread confusion in the wake of his government’s atrocities. Russia has often been at the center of this disinformation campaign. “The Russians are really good at this. Better than us,” a senior British general in the US-led coalition against ISIS said last year. “In many of our nation’s capitals, we didn’t realize we were being played.”

After the United States determined with “high confidence” that the Syrian government had killed more than 1,000 people in an August 2013 chemical weapons attack, Assad’s backers began aggressively spinning the story to deny his culpability. Russian Foreign Minister Sergey Lavrov questioned the “rebel narrative,” saying that videos of the “purported attack” were posted online before it supposedly happened, echoing a false claim initially made by bloggers loyal to the regime. When UN officials released a forensic report that implicitly linked the attack to Assad, Lavrov dismissed it and cited alternative accounts, such as one from “nuns at a nearby convent,” an apparent reference to a Lebanese nun who did not witness the attack but who told Russian state media it was “staged.”

Much of Russia’s information war in Syria has centered around the White Helmets, the volunteer force that has rescued thousands of civilians from bombed-out buildings. The group considers itself neutral, but it operates mainly in rebel-controlled territory and has drawn attention to government attacks on civilians. As the White Helmets became international heroes (a film about them won an Academy Award in 2017), they became a target for regime apologists and conspiracy theorists. After the Syrian government used chemical weapons in northwest Syria in April 2017, pro-regime news sources accused the “Al Qaeda–affiliated White Helmets” of creating a false-flag attack. The theory was amplified by Russian media and spread online with the hashtag #SyriaHoax. American alt-right figures, who opposed President Donald Trump’s military response to the attack, ran with the fact-free version of events. Infowars called the White Helmets “an al-Qaeda affiliated group funded by George Soros and the British government.” That lie was shared on Twitter by Infowars founder Alex Jones and conspiracy theorist Mike Cernovich and retweeted thousands of times.

A UN report released later that year squarely pinned the attack on Assad’s government. But the trolls had already done their damage—aided by Twitter’s and Facebook’s slow and often haphazard responses to false news on their platforms. “The disinformation campaign waged against the [White Helmets] has been brutal and unrelenting,” the investigative group Bellingcat concluded. “It has attempted to cast doubt on their ability to provide evidence, painted them as ‘terrorists’ and ultimately tried to transform them into ‘legitimate targets.’”