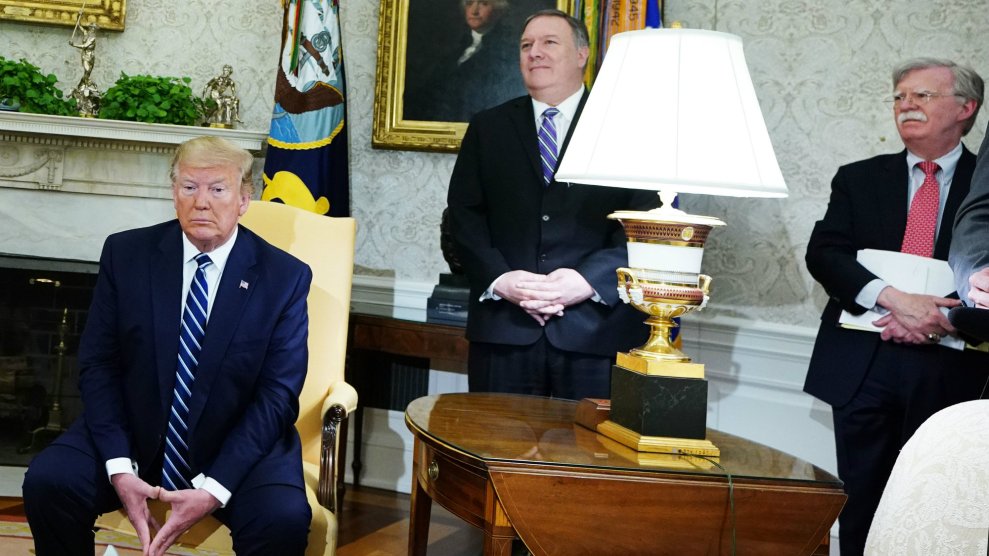 Early Thursday morning, the United States military accused Iran of an “unprovoked attack” on a Navy drone flying over international waters, spurring President Donald Trump to tweet that the Islamic Republic had “made a very big mistake.” Iran’s Revolutionary Guard acknowledged the attack but said the drone had been positioned over Iran, an allegation the Pentagon flatly rejected. The Associated Press summed up the dispute this way: “The different accounts could not be immediately reconciled.”

“It sort of reminds me of someone divorcing their spouse and then going back to the ex-spouse and saying, ‘You can’t be unfaithful to me.'”

More than a year after Trump walked away from the nuclear deal negotiated by his predecessor, President Barack Obama, the United States and Iran have entered an increasingly hostile chapter in their relationship. In this tense, uncertain moment for both countries, the precise location of a US drone—be it over the Strait of Hormuz or in Iranian airspace—is just one of several events of international importance that American allies, experts, and government officials can hardly reconcile. The US has accused Iran in recent weeks of bombing at least six oil tankers in the region and using its proxies in Yemen to attack Saudi Arabia. But Thursday’s incident marked a frightening turning point, with Tehran taking responsibility for an attack on a US military asset.

The crisis comes at a moment when relations between the US and its traditional allies are under strain. Trump has repeatedly bashed multilateral institutions such as NATO and has criticized European countries for not paying their fair share to support the alliance. The Europeans resent Trump’s unilateral decision to abandon the nuclear deal and, more recently, have felt economic pain from the administration’s efforts to reduce Iranian oil exports to zero. Iran, experts say, is trying to take advantage of the situation to further drive a wedge between Trump and European leaders.

“[Iran is] walking a fine line. They’re trying to avoid any pretext for greater cooperation between Europe, Russia, and the Trump administration,” Suzanne Maloney, senior fellow in the Brookings Center for Middle East Policy, said. “At the same time, in their own perception, they see an interest in demonstrating to the United States that they won’t bow to pressure.”

Complicating matters is the fact that the US has all but exhausted its menu of choices to isolate Iran. Trump’s brutal sanctions have already decimated the Iranian economy and limited the financial support regime officials have been able to provide to Hezbollah and other militant groups propped up by Tehran. Left with few remaining options, the administration has veered toward the possibility of a war with the second-most populous country in the Middle East—a country that possesses “the region’s largest and most diverse arsenal of ballistic missiles,” according to the Missile Defense Project from the Center for Strategic and International Studies.

No policy consensus has emerged from the Trump’s ramshackle team, which has not included a permanent Defense secretary for more than 170 days. In that vacuum, uniformed military officers have spearheaded the administration’s Iran work, alongside Secretary of State Mike Pompeo and national security adviser John Bolton, who both argued repeatedly before joining the administration for the possibility of a first strike against Iran. Just this week, Bolton told the Washington Free Beacon that Iran “would be making a big mistake if they doubted the president’s resolve on this.”

After Trump pulled out of the nuclear deal last year, Pompeo unveiled a list of 12 demands for Iran to meet before the US would negotiate another agreement. These requirements would expand the scope of negotiations—which the Obama administration had limited to Iran’s nuclear program—to a range of other issues, including Iran’s missile stockpile and its support for proxies in Syria and Yemen. Brian Hook, the US special representative for Iran, doubled down on this hardline approach last month. “We don’t want to give Iran veto power over our national security,” he said at the time.

Even after Trump walked away from the nuclear deal and ratcheted up sanctions, the administration has continued to insist that Iran uphold its end of the bargain. When Iran announced recently that it would increase its uranium stockpiles above the limits set forth in the Obama-era agreement, Pompeo spokesperson Morgan Ortagus told reporters that the United States wanted Iran to “abide by their commitments to the international community.”

“It sort of reminds me of someone divorcing their spouse and then going back to the ex-spouse and saying, ‘You can’t be unfaithful to me. You have to uphold your commitments,'” Ariane Tabatabai, an associate political scientist at the RAND Corporation and an Iran researcher at Columbia University, said. “It’s difficult to do that when you left.”

US allies are similarly skeptical. “Every single European government believes that the increased threat we’re seeing from Iran now is a reaction to the United States leaving the Iran nuclear agreement and trying to force Iranian capitulation on other issues,” Kori Schake, a Pentagon official under Obama, told the New York Times. “They believe that the US is the provocateur and they worry that the US is reacting so stridently to predictable Iranian actions in order to provide a pretext for a US attack on Iran.”

Pompeo, who has reportedly pushed for more aggressive action against Iran over the objections of Pentagon officials, struck a softer tone in a series of interviews this month, repeatedly emphasizing that the US does not want war. Hook, in a hearing before a House Foreign Affairs subcommittee on Wednesday, told lawmakers that “there is no talk of offensive action” within the administration. The Daily Beast reported Wednesday that Trump had privately urged his advisers to tone down their tough talk on Iran, an example he apparently followed on Thursday when discussing the Iranian attack. “I imagine someone made a mistake,” he told reporters gathered in the Oval Office before his meeting with Prime Minister Justin Trudeau of Canada. “We didn’t have a man or woman in the drone. It would have made a big, big difference.”

What happens next is anyone’s guess, including, it seems, Trump’s.

“This is a new wrinkle, a new fly in the ointment what happened, shooting down a drone,” he said. “And this country will not stand for it, that I can tell you.”