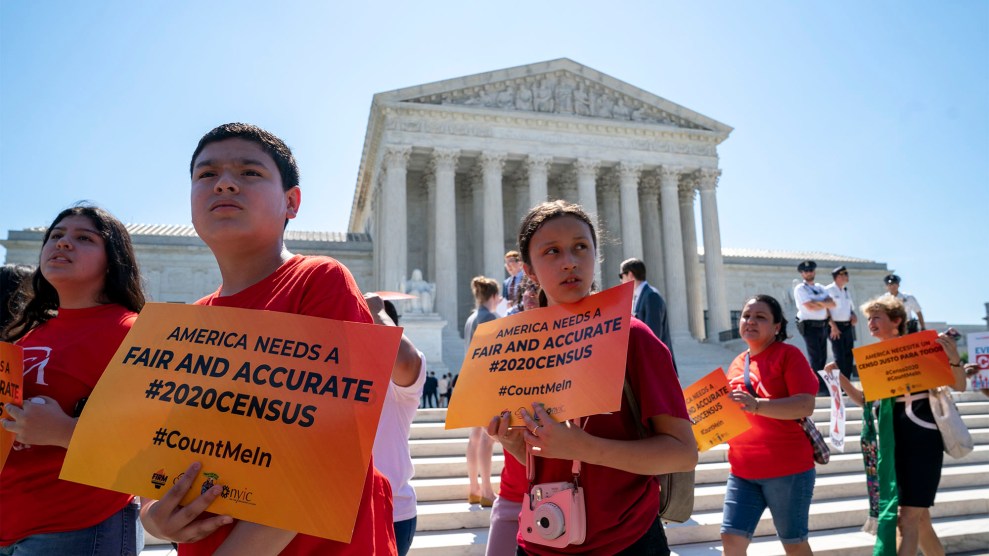 Demonstrators gather as the Supreme Court issues its decision on the census, June 27, 2019. J. Scott Applewhite/AP

The Supreme Court on Thursday blocked a citizenship question from appearing on the 2020 census but gave the Trump administration another chance to come up with a better rationale for adding the question. That would seem to give the administration an opportunity to revise its convoluted reasoning and potentially restore the question before the 2020 forms are printed. But voting rights experts say there’s little chance the question will end up back on the decennial census form.

“It seems almost impossible for this question to be added back to the census,” Vanita Gupta, president of the Leadership Conference on Civil Rights and the former assistant attorney general for civil rights in the Obama administration, said on a call with reporters Thursday.

Here’s why. First, the Trump administration has long claimed that the question was needed principally to better enforce the Voting Rights Act, an argument that Chief Justice John Roberts said “seems to have been contrived.” It would take time for the administration to come up with a better answer—if indeed there is one—and time is running out to finalize the 2020 census forms. It was the administration’s position throughout the case that the forms needed to be finalized by the end of June, so that they could be printed in time for the census to begin in April 2020. (The plaintiffs challenging the citizenship question said the deadline could be extended until October, but that still doesn’t leave much time for this issue to work its way through the courts.)

“This isn’t the type of thing you can do overnight,” said Dale Ho, head of the ACLU’s Voting Rights Project, which challenged the question in court.

Second, any new rationale for the question would immediately be challenged by the ACLU in court, Ho said. It would go before the federal district court in New York that first struck down the question in January. The same court is also considering a new motion to sanction former Trump officials for lying about why the question was added, in proceedings that will take place later this summer.

Third, a federal court in Maryland, which struck down the question in April in a separate case, is reopening the case to see if the administration intended to discriminate against Hispanics, based on new smoking-gun evidence showing that the GOP’s longtime redistricting mastermind, Tom Hofeller, had pushed for the question in order to draw political districts that would be “advantageous to Republicans and Non-Hispanic Whites.” The Fourth Circuit Court of Appeals just sent the case back to District Court Judge George Hazel, who said he would allow new evidence to be submitted in the case for 45 days.

The Hofeller revelations weren’t even mentioned in the Supreme Court’s opinion, since they emerged after the court heard arguments in the case. But now they could present another path to blocking the question. The Supreme Court’s ruling gives the Maryland court time to consider the new evidence. If it issues a new ruling finding that the citizenship question was intended to discriminate against Hispanics, that ruling might need to be appealed to the Supreme Court in order for the question to be restored on the census—a dubious proposition, since the court’s term ends this week. The case would then need to be heard in the court’s fall term, which doesn’t leave much, if any, time to decide the case before the bureau’s deadline.

“Hofeller will very much be part of the case going forward,” Ho said.