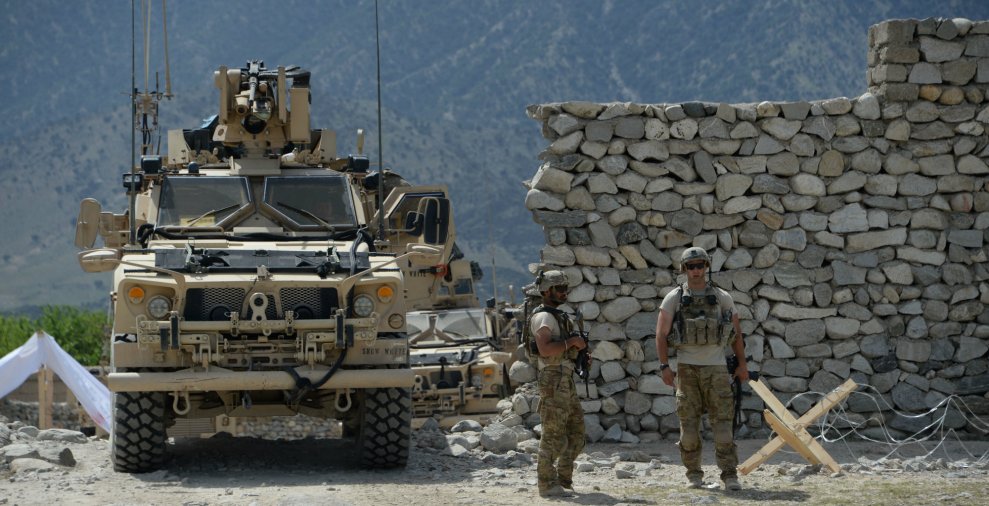 American soldiers patrol near the site of a US bombing during an operation against Islamic State (IS) militants in the Achin district of Afghanistan's Nangarhar province on April 15, 2017. Noorullah Shirzada/AFP/Getty

It’s not just a majority of Americans who think the wars in Afghanistan and Iraq were a catastrophic mistake. Military veterans now increasingly say the Bush-era conflicts were not worth it, according to a Pew Research Center survey released Wednesday.

Sixty-four percent of the 1,284 veterans interviewed by Pew said the Iraq invasion was not worth fighting, while 58 percent similarly dismissed the 17-year Afghanistan conflict as a waste. “Veterans who served in either Iraq or Afghanistan are no more supportive of those wars than those who did not serve in these wars,” Pew researchers Ruth Igielnik and Kim Parker wrote. “And views do not differ based on rank or combat experience.”

A concurrent poll of civilian views reached the same, general result. By substantial quantities, Americans in and out of uniform now view the several-trillion-dollar wars as a mistake.

“Our veterans have borne the brunt of these policy mistakes and it is not surprising they would be wary of more endless war abroad while also not looking kindly on our current wars,” says Nate Anderson, executive director of the conservative Concerned Veterans for America organization, in a statement.

The Afghanistan conflict enjoyed broader support at the start of President Barack Obama’s presidency, but that approval eroded during his second term, even though Republicans continue to view both wars more favorably than Democrats.

Once Donald Trump entered the White House, more than half of Americans believed the US had failed in its mission in Afghanistan.

“People came to realize over time that there was no real strategy for our engagement,” says Will Goodwin, director of government relations at VoteVets, a progressive advocacy group. “It wasn’t clear what the national security interest was.”

Trump, famously, seemed to agree with that sentiment. During the 2016 presidential campaign, he said US officials made a “terrible mistake getting involved” in Afghanistan and, despite initially supporting the Iraq War, later called it a “disaster.” He also said Bush’s Middle East wars constituted the “worst single mistake ever made in the history of our country.”

The American military presence in Syria has been equally as unpopular among veterans, researchers have found. Fifty-five percent of them think the five-year intervention in Syria, launched by Obama in opposition to Syrian leader Bashar al-Assad, has not been worth it. Only 42 percent support it. Trump promised in December to withdraw roughly 2,000 American troops from Syria, sparking opposition from the State Department and Pentagon, and eventually leading to the resignation of Defense Secretary James Mattis. The president ultimately agreed to let 400 troops stay in the country.

Last year, the Pentagon unveiled a national defense strategy geared at orienting the nation’s military away from fighting terrorism in the Middle East and toward competition with China and Russia, but active duty service members interviewed by Military Times were not as quick to believe the shift would occur.

In a survey conducted by the defense-focused publication in the fall, nearly 45 percent of respondents said they worry the US would “be drawn into another major military conflict soon.” Months later, the Trump administration has veered toward the possibility of a war with Iran and veterans are not happy.

Only 6 percent of veterans and 13 percent of military households support the US being more engaged in conflicts around the world, according to a poll commissioned by Concerned Veterans for America in April. The results mirror a poll jointly conducted by CVA and VoteVets last month that showed voters in several swing districts widely disapprove of a military confrontation with Iran.

“With some in Washington beating the drum for action against Iran, it is important we learn from the past,” Anderson says. “Our leaders owe it to veterans and service-members to not repeat the same mistakes.”