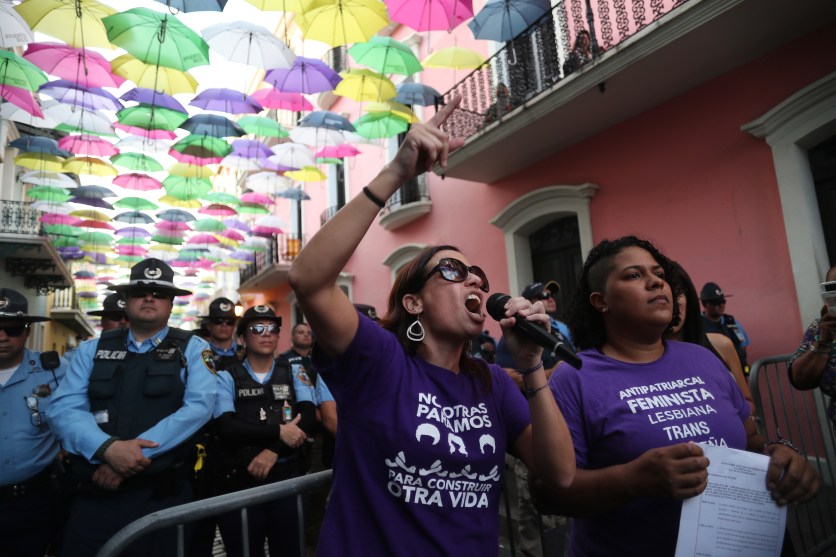 After nearly two weeks of massive protests, Puerto Rico Gov. Ricardo Rosselló announced his resignation on July 24, becoming the first chief executive in the island’s history to step down during a term. Rosselló’s downfall began in early July when two of his former officials were arrested by the FBI on corruption charges. Not a week later, the island’s Center for Investigative Journalism published 889 pages of leaked chat messages between Rosselló and members of his administration filled with homophobic, misogynistic, and fatphobic comments—many of which were aimed at political opponents, activists, and even victims of Hurricane Maria.

One of the groups targeted in the comments was Colectiva Feminista en Construccióna feminist organization in Puerto Rico that advocates for racial, sexual, and gender equality as well as the decolonization of the island. As the New York Times reported, a member of the chat posted a photo of a Colectiva activist wearing a T-shirt that read “Antipatriarchal. Feminist. Lesbian. Trans. Caribbean. Latin American.” To which the governor replied, “That has to be some kind of record, no?”

Shariana Ferrer-Núñez, a community organizer and co-founder of the Colectiva, says Rosselló’s mocking comments likely stemmed from a 2018 protest where the group camped outside of his mansion to try to get him to sign an executive order they drafted aimed at curbing the island’s alarming rates of gender-based violence.

Rosselló’s resignation arrives in the aftermath of especially tough years for Puerto Ricans. In 2016, then-President Barack Obama signed the controversial PROMESA law, which established an unelected fiscal control board to manage the island’s staggering debt, a decision many viewed as a colonial overstep. The board, known locally as “la junta,” wasted no time enacting strict austerity measures that slashed funding for schools, hospitals, and other public institutions.

Amid this economic crisis, Hurricane Maria tore through the island, leaving millions of people without electricity and sparking an exodus of Puerto Ricans for the United States. Today, Maria’s death toll is believed to be in the thousands, 265 public schools have since closed, and nearly half of the island’s residents live in poverty. These were all factors fueling the protests over the last few weeks, and inspiring signs that said “Ricky renuncia y llévate a la junta” (“Ricky resign and take la junta with you”) and “Y por los 4,645 muertos, renuncia” (“Because of the 4,645 [Hurricane-related] deaths, resign”).

Rosselló is scheduled to leave office this Friday, August 2. It’s unclear who will eventually succeed him. Because the normal next in line, the secretary of state, resigned following the text scandal, the island’s secretary of justice, Wanda Vázquez, is next in line. But calls for her resignation broke out online and in the streets almost immediately after Rosselló stepped down; many associate her with Rosselló’s disgraced administration, and call her “Wanda Corrupta.” On July 28, Vázquez tweeted that she has “no interest in occupying the position of Governor.” If she does not occupy the position, the governing New Progressive Party will have to appoint a new secretary of state to fill it.

The historic mobilization that ousted Rosselló and some of his top officials has also seemingly propelled Puerto Rico towards an important crossroads, leaving many wondering what lies ahead for the island’s future. I spoke with the Colectiva’s Ferrer-Núñez about the events leading up to Rosselló’s resignation, and what’s next for the protest movement.

Why were the leaked chats given so much significance that they sparked one of the biggest uprisings in the island’s history?

This was a buildup: 2017 changed the country even before the hurricane. We had a big feminist movement that was rising up, that was taking the streets, that was protesting. And a lot of women felt empowered. In 2017, the University of Puerto Rico had a student strike and the students’ demands were not specifically for their own personal interests. They were struggling for our country. They were understanding the link between public education and the way the university has been subjected to a lot of austerity measures proposed by the fiscal control board. So, people began looking to the bigger picture and not just their own personal interests. That’s what started off the first half of 2017.

And then in the second half, we had this hurricane that unveiled so much of our own fragility—not in terms of people or of community because that’s where our strength actually comes from. But in the sense of our fragility in thinking our relationship with the US is something that’s strong and they’re there to help us. We saw and lived how the US government and Trump’s mandates left us there to die. There’s a collective consciousness that was awakened in 2017 and we became another country in many subtle ways—in how we felt and understood solidarity and where it comes from. And that spirit has been waking up this sleeping giant of the masses and el pueblo.

A week before the chats were leaked, the ex-secretary of the department of education [Julia Keleher] was arrested for fraud and corruption. So there was already a lot of momentum building up. We already knew the government had conflict of interests—that they were returning favors for political gain, that they were hiding reports of donations and the aid received in the aftermath of Hurricane Maria. The people already knew that was going on. The chat only put it into paper. And it was important and significant to put that into paper. That’s why the people started protesting— because they were sick of it.

“It was a surprise for a lot of people to see what the person who’s supposed to lead the country really thought of poor people, fat people, of women, of LGBT communities.”

How did the Colectiva respond when you all discovered you were targets in some of the leaked texts?

In a way we weren’t surprised. I would not say that we felt offended. The greatest offense the government and Governor Rosselló did was actually not listen to the complaints of women being killed, brutally raped, and sexually harassed daily. That was the real offense here. It was never because of words. It wasn’t a surprise for us. But I guess it was a surprise for a lot of people to see what the person who’s supposed to lead the country really thought of poor people, fat people, of women, of LGBT communities. A lot of people had a sense, like an intuition of it. But it was quite different when you see it printed.

If the governor’s power has been stripped by the fiscal board, why is there so much emphasis on who the governor is?

La junta oversees any decision regarding the economy. But there are other things the governor still has the power to establish in terms of public policy in the country. The governor being in the forefront of the government is a key role in order to face la junta. We would think a governor that is for and by the people would be fighting against la junta and being a facilitator to strike against colonialism.

Some people may read about what’s happening in Puerto Rico and think of it in an isolated context. How are Rosselló and his administration connected to US politics?

Why do you think people keep saying this is only the beginning?

This problem we have in our hands isn’t about one individual. People are beginning to acknowledge the way the government actually works and how corrupt institutions have become. We as a collective, we’re trying to push this understanding that in order to change how we have been living we need to transform a lot in our country, starting with our government. This will bring a lot of reflection, political consciousness, and awareness because we are being now faced with what self-determination actually means. I guess that’s a conversation that’s only starting, but who knows where we might end up. As a pro-independence collective, we understand that self-determination is the key and this past week has been an active exercise in people taking control of their lives and expressing what they want and what they don’t.

“We are being now faced with what self-determination actually means.”

This is a moment to be celebrated, but is there anything you’re worried about with Rosselló leaving?

One of the concerns is then who’s next? It’s not just only who’s next in the line of succession, but also where does the country want to go from here on? That’s a big question that we’re only going to answer by organizing and continuing the struggle.

In an ideal world, what happens next?

We need to declare a state of emergency against gender-based violence, we need to audit the debt, we need to hold accountable every fraud and corrupt public official or anyone who benefited from the illegal and conflict of interest negotiations with the government. We need to reiterate our commitment with public education, with housing, with labor rights, with the economy, with our bodies. I guess that can be a point of departure for what comes next.

The end goal is to start building another life that creates people who are free and not just free in the sense of independence for our country but also to dismantle systems of oppression that crush us. So I guess we have a lot of things to work out. But I’m really hopeful. Because there has been a collective consciousness that has awakened. And it’s our responsibility as people who are activists to not let this fire, the people’s fire, burn out.