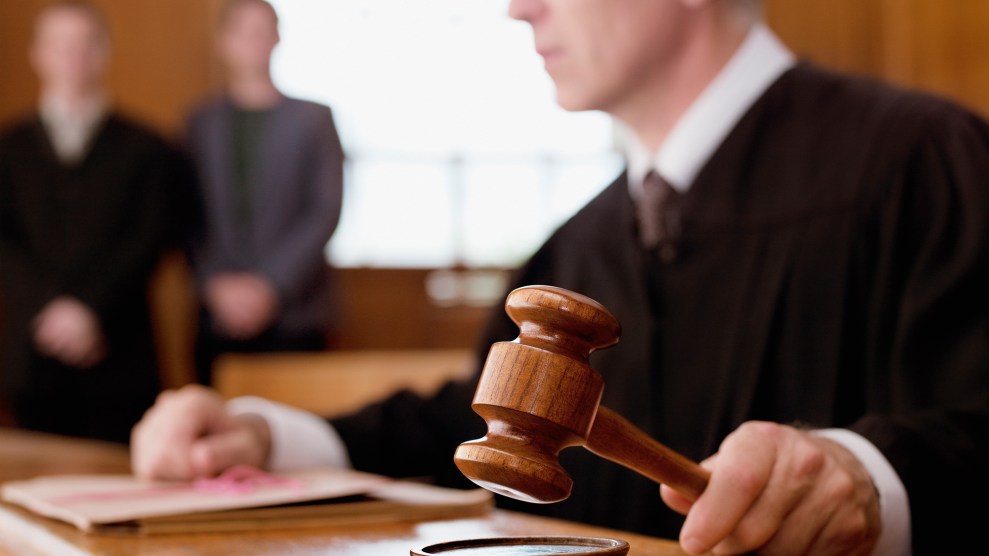 State courts hear 95 percent of cases filed in the United States, setting sweeping legal precedents that influence generations. “The [courts] touch virtually every aspect of our lives,” says Alicia Bannon, managing director of the Democracy Program at the Brennan Center for Justice. But unfortunately, and perhaps unsurprisingly, the people whose hands those decisions rest in—the state supreme court justices—don’t reflect the population their judgments impact.

“These are extremely important and powerful courts,” says Bannon, a co-author of the report. “They’re the final word on interpreting state law and constitution. They’ve ruled on abortion rights, the death penalty, consumer protections, whether or not localities can regulate fracking.”

That said, there has been a broad increase over time in the number of women and people of color serving on state supreme courts. But the numbers don’t actually equate to diversity on a proportional level. In other words, while supreme court benches have remained largely white and male, the US population has become less and less so, in turn making state supreme courts less representative of the public they serve. “By that measure, the gap is actually larger now than it was a generation ago,” Bannon says.

Experts argue that diverse courts improve judicial impartiality because having judges with a wide range of perspectives, backgrounds, and experiences leads to a more nuanced and balanced understanding and application of the law. Judicial diversity is also a crucial factor in the public’s perception and trust in the court system. “It matters tremendously for the public legitimacy of our courts when the judges that are making these really important decisions don’t look anything like the people who are affected,” Bannon says.

Here are six of the most startling findings from the report, which considers the makeup of state supreme court judges from 1959 through May 2019:

1. Almost half of states have all-white supreme court benches

Nationwide, only 15 percent of state supreme court justices are Black, Asian, Latinx, or Native American, despite the fact that these groups make up almost 40 percent of the general population.

24 states don’t have a single nonwhite person sitting on their supreme courts. Even more striking is that in eight of those states with all white justices, people of color account for a quarter or more of the state’s population.

The stark divide between the demographics of the population and the judiciary is particularly pronounced in the South, but it’s far from limited to that region. People of color, for instance, make up 51 percent of Nevada residents. In Alabama, Delaware, and Alaska, that population ranges from 34 to 39 percent. Yet, all of these states’ supreme court judges are white.

2. One-quarter of states have never had a supreme court judge of color

3. More than one-third of states only have one female supreme court justice

Overall, women make up just over a third—36 percent—of state supreme court justices. 17 states have only one female justice currently serving at the supreme court-level. The picture is even worse for women of color, who make up only 7 percent of states’ highest courts despite accounting for 20 percent of the general population.

4. Judicial elections have been a barrier to diversity

The odds are especially stacked against minorities in states that use judicial elections, as opposed to appointments. In the almost 60 years covered by the report, only 17 judges of color first reached the state supreme court via elections. That’s only 4 percent of all newly elected state supreme court justices. By comparison, people of color made up 12 percent of judges that were initially appointed to the bench. 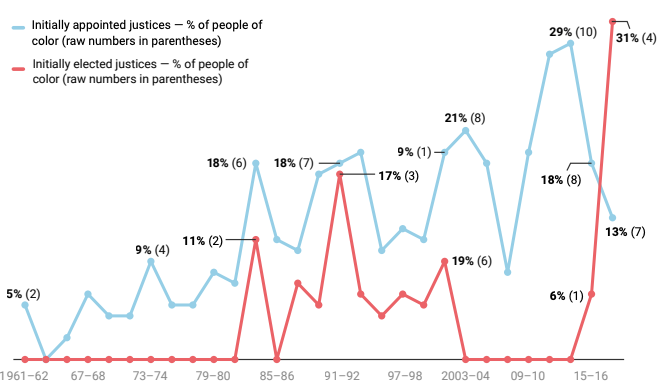 Some of the disparity could arguably be attributed, at least in part, to a flood of spending over the past two decades on judicial elections, which have become increasingly politicized. Special interests groups accounted for a record 40 percent of supreme court election spending ($27.8 million) in the 2015-2016 cycle. Between 2004 and 2016, such groups spent significantly more on negative TV ads targeting judicial candidates of color than on ads targeting white ones.

5. Democrats have been more likely to appoint justices of color

Despite longer-term trends in the opposite direction, there was an unusually low proportion of judges of color selected by appointment in the last judicial cycle (2017-2018). The report authors posit that this could be connected to the fact that there were more Republican governors serving than at any time since at least 1939. Historically, Democratic governors have appointed a higher proportion of minority justices than their Republican counterparts. Between 2000 and 2016, Democratic governors appointed 67 percent of the state supreme court judges of color.

6. At the federal level under President Trump, diversity is even worse

The report also notes the Trump administration’s federal court nominees are the least diverse in decades. As of June, not one of the president’s 46 appellate court picks have been Black or Latinx. Only nine have been women. The administration’s district court nominees have been similarly dominated by white men. In fact, President Trump is the first Republican president since the early 1930s to nominate fewer women and minorities to federal judgeships than his Republican predecessor.

In the first two years of Trump’s presidency, more than 90 percent of his confirmed circuit court and district court nominees have been white, according to the Congressional Research Service. That’s a higher percentage than under any of the six preceding presidents except President Ronald Reagan. About 65 percent of President Barack Obama’s confirmed nominees were white.

“These are lifetime positions and for people that are appointed as lower court judges it’s often a pipeline to higher court positions,” Bannon says. “We’re going to be feeling the effects of the nominations that president Trump has made for generations.”