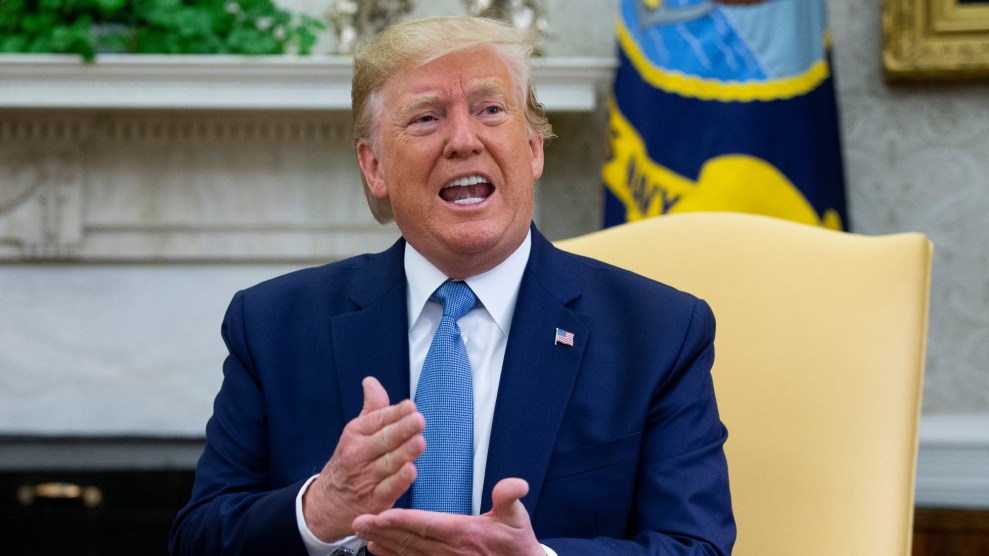 George Hill is president and CEO of Maine Family Planning, one of the largest providers of health care in the state, and Maine’s sole Title X grantee. Since 1970, Title X has given grants to a range of community programs, as well as universities and state and local health departments, to provide low-income women with reproductive health services. Maine Family Planning, Hill’s nearly 50-year-old organization, runs 18 reproductive health clinics that serve almost 23,000 clients a year, and it’s received about $2 million every year from the federal government’s Title X program.

Last week the Trump administration announced it would go forward with a new regulation affecting Title X that many are calling a “domestic gag rule.” If an organization wants to continue receiving funds, health care professionals will be forbidden from offering abortions—or even referrals to abortion services. (Earlier this week, Health and Human Services announced it would give providers addition time for compliance.) One consequence of this new rule is the harm it causes for many recipients in underserved rural communities where clinics don’t just provide reproductive health care, but also serve as the only medical point of contact for people struggling with opioid addictions.

“I predict a worsening of the opioid epidemic…this is definitely going to get worse.”

“In Maine, where we grapple with poverty, substance use disorder, and a largely rural environment, Title X clinics have long played a key role in alleviating barriers to health care access,” Hill said before last week’s announcement. “Allowing this gag rule to go into effect will also close family planning clinics, leaving low-income communities with limited options and in many cases no health care at all.”

Hill and other organizations throughout the country face a difficult choice under Trump’s new restrictions: Reject crucial funding or comply with rules that they consider bad medicine for patients. Hill rejected the funds. That isn’t a decision without consequences. Hill estimates that 30 to 40 percent of the clinics’ funding comes from Title X. And for roughly 70 percent of all patients seen at Maine Family Planning, these clinics provide the only health care they regularly receive, and those visits include screening and referring patients who suffer from substance addictions. For a state like Maine, which has one of the highest rates of overdose deaths involving opioids in the United States, a threat to these clinics could set back efforts to treat this epidemic.

“Our experience has been that not until patients establish some level of trust with the providers will they reveal that there is that substance use disorder, and that takes some time,” Hill says. “Our staff is great at establishing a rapport with patients.”

Dr. Mishka Terplan, a professor at Virginia Commonwealth University specializing in gynecology and addiction medicine, argues that the Trump administration’s gag rule could have a devastating impact on the opioid epidemic.

“I predict a worsening of the opioid epidemic,” says Terplan. “There are some [clinics] that get a whole lot of money from fundraising, and this gag rule is a problem, but is not a death sentence for their clinics. [But] there are clinics for which this is desperate.” He says that in states like West Virginia and Kentucky, a funding cut could essentially cripple providers who have been the first line of defense in the opioid crisis. “So yes, this is definitely going to get worse.”

Trump made fighting the opioid epidemic a cornerstone of his campaign in 2016, calling it a “tragedy” and claiming that if he became president, he was “going to stop it.” While much of his rhetoric was laser-focused on building a wall rather than on public health programs, the opioid epidemic has been a frequent point of reference during his time in the White House and has stressed his commitment to increasing funding for treatment. But Terplan sees a fundamental disconnect between the value that the administration places rhetorically on fighting the crisis and how its policies affect efforts and lives on the ground.

“On the one hand, the surgeon general and all of HHS down from the president says the opioid crisis is an all-hands-on-deck crisis, and all institutions need to respond,” Terplan notes. “On the other hand, the gag rule really takes away the ability of an essential part of our health care system to respond. You can’t have both.”

“We have several epidemics that are front-page news. One is opioids and the other is maternal mortality, and I would say this gag rule is dumb policy as a way to respond to both.”

In addition to preventing health care professionals from detecting and treating opioid addiction, the change harms clinics that serve a vital role in trying to improve maternal mortality rates for people struggling with addiction. While maternal mortality and addiction are often discussed as separate issues, one of the leading causes of postpartum deaths in the United States is overdosing.

In Maine, clinics like Hill’s provide vital care for many women. Low-income women suffering from addiction turn to them for primary care and drug screening, and to speak with counselors for referrals. Some of Hills’ clinics provide in-home parenting classes on nutrition and child safety, which can help ease the strain of parenthood on women struggling with substance abuse.

“One of the driving factors is that in [some] states, women lose their Medicaid at about 60-days postpartum,” says Hendrée E. Jones, executive director of UNC Horizons, a clinic for pregnant and postpartum women suffering from addiction. In states that haven’t accepted Obamacare’s expansion of Medicaid, low-income women become eligible for government-subsidized insurance when they become pregnant. But that coverage expires about two months after they give birth. New mothers who have just received an “intense level of care and in some cases an intense level of treatment,” Jones says, face extreme difficulty when they lose that support once the baby is born.

“We have several epidemics that are front-page news,” Terplan says. “One is opioids and the other is maternal mortality, and I would say this gag rule is dumb policy as a way to respond to both.”

For Terplan, policies like the “domestic gag” rule are clear illustrations of how Trump’s domestic priorities are contradictory. “You can’t say that you really care about opioid treatment and then also put in policy like that,” Terplan says. “Or you care more about restricting reproductive health options for women than you do about responding to the opioid crisis.”