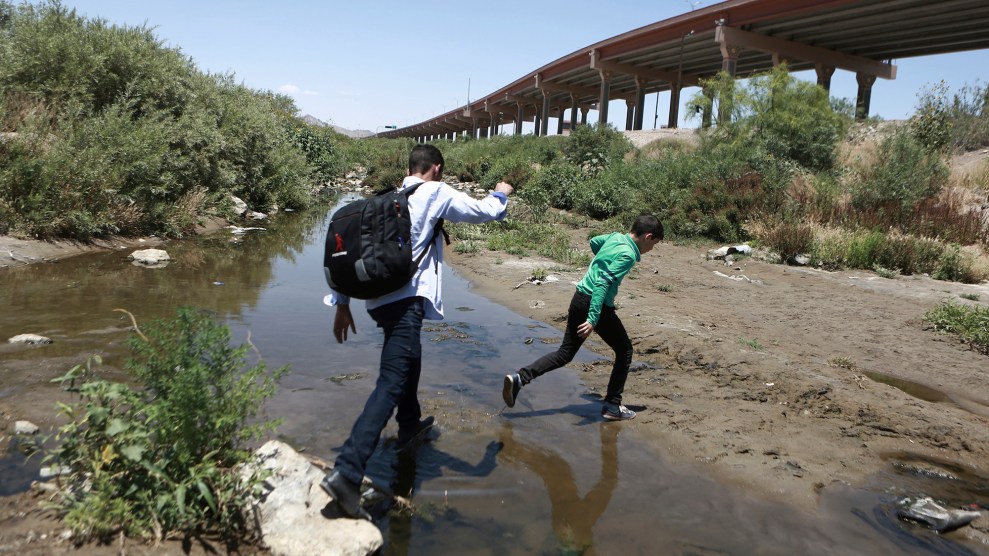 Two people cross the Rio Grande in Texas in June to turn themselves over to Border Patrol agents to request asylum.Christian Torres/AP

In a major victory for detained asylum seekers, a federal judge in Washington state has blocked the Trump administration’s attempt to deny them bond hearings. The policy would have meant indefinite detention for thousands of asylum seekers.

The decision by district court judge Marsha Pechman, a Bill Clinton appointee, forces the government to quickly provide bond hearings to asylum seekers before an immigration judge. Pechman is also requiring judges to grant bond unless the Department of Homeland Security can demonstrate that an asylum seeker should remain in detention.

The class-action lawsuit is being argued by the American Civil Liberties Union, American Immigration Council, and Northwest Immigrant Rights Project. Michael Tan, a senior staff attorney with the ACLU, said in a statement, “Try as it may, the administration cannot circumvent the Constitution in its effort to deter and punish asylum-seekers applying for protection.”

In April, Attorney General William Barr used his broad authority over immigration courts, which are part of the Justice Department, to rule that asylum seekers who cross the border without authorization are not entitled to bond hearings. The decision would force asylum seekers instead to ask Immigration and Customs Enforcement to release them on parole. But under President Donald Trump, ICE has all but stopped granting parole in many parts of the country. As Mother Jones reported last year:

A class-action lawsuit filed by three groups—the American Civil Liberties Union, Human Rights First, and the Center for Gender and Refugee Studies—in March showed that in five of its 24 field offices, ICE paroled 92 percent of eligible asylum-seekers between 2011 and 2013. In the first months of the Trump administration, from February to September 2017, ICE’s parole rate dropped to less than 4 percent in those offices. The El Paso, Texas, field office denied parole in all 349 cases it heard.

James Boasberg, a federal judge in Washington, DC, ordered ICE to stop arbitrarily denying parole in those regions last year, but the agency is still releasing far fewer people that it once did. The ACLU and immigrant rights groups are asking Boasberg to hold the government in contempt as a result.

In May, the ACLU and Southern Poverty Law Center sued the Trump administration for denying parole to nearly all asylum seekers in the five Southern states covered by ICE’s New Orleans office. Between 2016 and 2018, the New Orleans office’s parole rate dropped from 75 percent to just 1.5 percent, the lowest in the country.

Pechman’s decision applies only to asylum seekers who cross the border without authorization, due to a quirk of immigration law. Under this system, only those who cross without authorization are eligible for bond, while those who come to official border crossings are not eligible and must ask ICE for parole. Pechman’s decision does not end that discrepancy, though it does make it much easier for those who cross between ports of entry to get out of detention. The Trump administration forces asylum seekers to wait for weeks to request asylum at ports of entry, leading many migrants to cross the border without authorization and turn themselves in to Border Patrol agents instead.