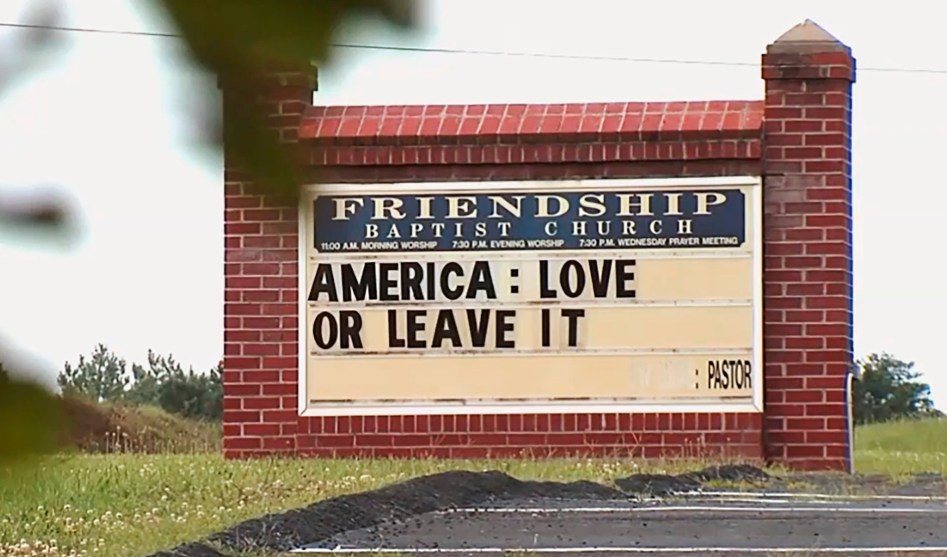 In 1970, country singer Ernest Tubb was pissed off.

“Well, I’m getting mighty tired of seeing hippies run wild and burning down the schools and stepping on the flag,” he sorta-sings, mostly-rants. Tubb’s song crescendoes with the chorus: “It’s America—love it or leave it.”

By then, Tubb’s song was an echo of a long-time chant that resurged during the Vietnam War era, targeting “hippies,” though it applied to any “other” who dissented. He wasn’t alone. “You’re walking on the fightin’ side of me,” Merle Haggard sang around the same time. “If you don’t love it, leave it.”  It was the stiff-backed moan of white men unmoored by all this desire for change.

For years, white Americans have been telling those who demanded reform but did not conform to their ideal of whiteness to simply leave.

The country was founded, after all, by Englanders fleeing oppression who then stole land from native peoples. Many Northerners before the Civil War famously did not value the abolition of slavery so much as they hated Southern interference in their lives—the Compromise of 1850 radicalized passive white unionists who didn’t like the idea of the South meddling via the Fugitive Slave Act, but who balked at the idea of proximate equality. Liberia was founded by a Back-to-Africa movement applauded by America’s white political establishment. The 1920s brought a quota on immigrants. In the 1940s and 50s, there was the House Un-American Activities Committee, which publicly disavowed Communists as traitors to America.

Similar nativist sentiment resurfaced at a rally for President Donald Trump in Greenville, N.C., when chants of “send her back” echoed through the crowd upon mention of Somali-born Minnesota Congresswoman Ilhan Omar. In Appomattox, Va., a church put up a sign this week declaring: “America: Love it or Leave It.”

….and viciously telling the people of the United States, the greatest and most powerful Nation on earth, how our government is to be run. Why don’t they go back and help fix the totally broken and crime infested places from which they came. Then come back and show us how….

We reached out to Dr. Ibram X. Kendi, author of Stamped from the Beginning: The Definitive History of Racist Ideas in America, to learn more about the meaning of the phrase “America: Love It or Leave It” and the long history of nativism as a campaign tool.

“My living here, being born here, and being a citizen here—none of those fine details matter,” Kendi wrote recently in The Atlantic. “To [a Trump supporter], to millions like him, to their white-nationalist father in the White House, I am not an American. They want me to prove, like all the Barack Obamas, that I’m really an American.”

What happens in your mind when you hear a phrase like “America: Love it or leave it”?

My initial thought is that it sort of conveys—particularly to people of color—that this is not our home. Because it’s almost this idea that, “How dare you come into my home and criticize it?” And so it makes complete sense if this is not our home that we have no right to criticize it. But if it is our home, then I have just as much right to criticize and want to make it better as anyone else.

And the idea of who can criticize America has been discriminatory?

Is there a specific time when phrases like this become common?

Can you think of similar moments to now where phrases like this become rallying cries for a political candidate?

In the 1840s you had a political party [the “Know-Nothing” party] that was literally founded on nativist ideas specifically targeting Catholics, and particularly Irish Catholics—pretty much anyone who was not Anglo Saxon. You also had a situation during the Civil War when the Lincoln administration was trying to figure out what it was going to do with free black people. The Lincoln administration began advocating, particularly among black people, that they should accept colonization back to Africa, and of course, black people resisted that.

It seems like part of the equation has been that white people are willing to accept a certain kind of equality of other people, as long as it involves them leaving America or leaving the community that’s been created. I’m curious how that squares with the other founding myth of America, which is that we’re a nation of immigrants.

I think America historically is a nation of immigrants and, of course, indigenous people. But what’s also the case is that every single time a large group of immigrants has come into this country—except if they were from places like England, or even Germany (but only to a certain extent)—they faced a withering backlash from “the natives”; particularly the white, Anglo Saxon natives. Yes, literally, the United States is a nation of immigrants and indigenous people, but all of those immigrants faced nativist ideas. So some of the very same people who were chanting “send her back” or “go back to your own,” their own ancestors faced the same chants. Now, whiteness—or Americanness—has become much more broad today, such that they rarely hear it, if ever. But that’s the huge irony. Their ancestors faced the same type of issue—particularly if the ancestors are from Ireland or Southern or Eastern Europe or Jewish.

How have we seen this play out over the longterm? How do these moments of nativism continue on? Are there examples?

I think you had particular political figures that have used attacks on immigrants for political gain. That certainly happened in 1924, which, of course, led to the Immigration Act of 1924, which effectively barred or limited immigrants from pretty much every country on Earth, aside from Anglo Saxon parts of Europe. I think it’s obviously resurfacing today, specifically that brand of white nationalism and nativism and racism, through Trumpism.

In The Atlantic you wrote, “I’m tolerated until I’m not. I can dine on American soil until I demand a role in making them remaking the menu that is killing me, like those four progressive Congresswomen of color.”On a personal level, how do you deal with this day-to-day?

So I, as a historian, recognize that there has been this long-standing debate among African American activists about how to think of both people saying “go back to your country” and the way we’ve been treated by America. That debate is one I’ve had within myself that I’ve never really been able to resolve. That debate is between those who’ve stated that we African Americans are indeed American, and we deserve freedom and rights because we’re in America. Then others have stated that since we are not free, and since we do not have equal rights, we are not American. Both ring true to me. When these types of sentiments surface, that internal debate resurfaces as well in my mind.

When Trump says, If you don’t like, it leave it,” people I know say it reminds them of a sign like this from 1971 in NC county near where I live. pic.twitter.com/uTaQP0ckmp

There’s been a photo circulating from North Carolina—where I’m from—of the Klan using the phrase “love it or leave it.” It shows that the phrase can also serve as a cultural touchstone for white people and white identity. I’m wondering how you how we think about the idea of white identity as being fixed to distancing other people.

The way white identity operates in America is that to be American is to be white, and to be white is to be an American. That fundamentally leaves out people of color having the capacity to be an American. And so if you, as a white person, are essentially an American, you’re able to imagine that “the other” is distant both from whiteness and also from Americaness.