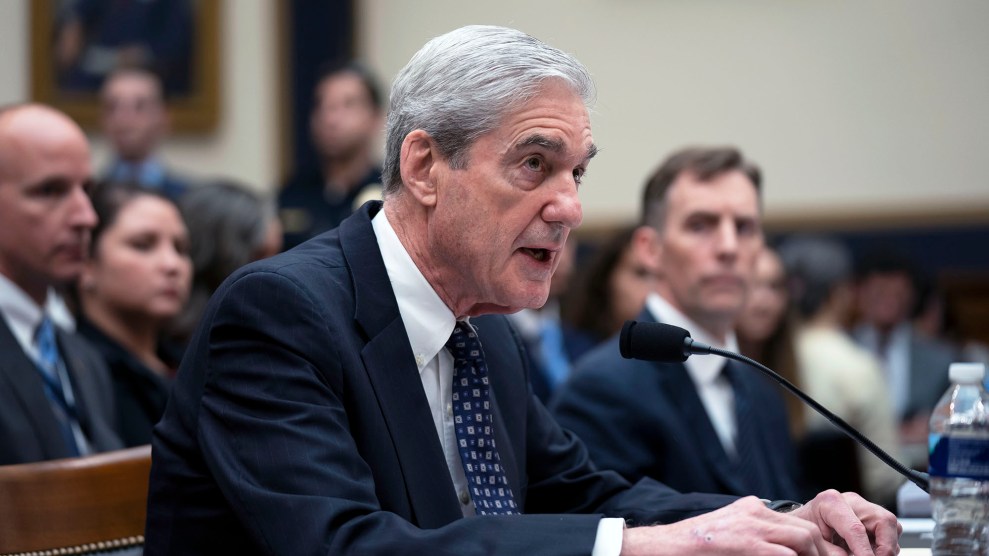 There’s an old saying in newsrooms: News is stuff that people have forgotten. Robert Mueller’s dramatic appearance before the House Judiciary Committee on Wednesday morning was a striking reminder of this adage. The former special counsel did not drop any new revelations about the Trump-Russia affair. Yet in a simple but important manner, he reiterated the basics of this scandal—perhaps the most consequential political scandal in American history. These are the fundamentals that have often been subsumed by all the never-ending partisan squabbling and by the ongoing crusade mounted by Donald Trump and his defenders to distract from his perfidy. These are the facts that Trump has refused to acknowledge, and they are the facts that taint his presidency and undermine its legitimacy.

In the quiet way of an institutionalist who respects norms and rules, Mueller made it clear: Trump engaged in treachery.

In his opening statement, Mueller emphasized the key finding from his report: “The Russian government interfered in our election in sweeping and systematic fashion.” And during the questioning, Mueller repeated the conclusion previously reached by the US intelligence community that Russia conducted this covert operation to help Trump get elected. “Did your investigation find that the Russian government perceived it would benefit from one of the candidates winning?” Mueller was asked by Rep. Zoe Lofgren (D-Calif.). He replied with one word: “Yes.” Lofgren followed up: “And which candidate would that be?” Mueller responded, “Well, it would be Trump.”

So Russia attacked an American election to help Trump. And what did Trump do? “The Trump campaign wasn’t exactly reluctant to take Russian help,” Lofgren remarked to Mueller. “You wrote it expected it would benefit electorally from information stolen and released through Russian efforts, isn’t that correct.”

Mueller answered with another brief sentence: “That’s correct.” That is, Trump sought to exploit a foreign adversary’s clandestine assault. And as Mueller noted in his report, during the campaign Trump dismissed the notion that Russia was intervening in the election, and after he was elected he continued to deny “that Russia aided his election.”

For a moment, put aside the question of collusion. (Despite Trump’s insistence that Mueller found no collusion, Mueller testified that “we did not address collusion,” but rather the issue of criminal conspiracy.) And consider the story so far: Russia attacked, and Trump denied the attack happened—which provided cover for Moscow—yet attempted to benefit from it. This is a profound act of betrayal. It is the essence of the scandal: A presidential candidate aiding and abetting an assault on the United States. And Trump’s denials of the Russian operation during the campaign and his public statement asking Russian hackers to target Hillary Clinton could certainly have been read by Moscow as encouragement. (The same is true for the various private Trump campaign contacts with Russian intermediaries that occurred while the Kremlin was mounting its information warfare against the United States to subvert the election to assist Trump.)

This is the narrative that Trump has desperately wanted to obstruct and smother since the campaign. He was elected president partly due to the Russian intervention he has refused to fully acknowledge and address. After the election, he did not want a comprehensive investigation of any of this, and, as Mueller’s report noted, Trump took multiple steps to block Mueller’s probe—actions that could amount to obstruction of justice.

Yet Trump has escaped prosecution on that front. Mueller’s report stated that Trump could not be charged with any crime because of a Justice Department policy prohibiting the indictment of a sitting president. Still, Trump has repeatedly brayed that Mueller exonerated him. In a notable exchange at the start of the hearing, Mueller was asked if his report did indeed absolve Trump. “That is not what the report said,” Mueller declared. He later commented, “The president was not exculpated for the acts he allegedly committed.” Muller also said that Trump could be charged with obstruction of justice after he leaves office. (As Mueller was testifying, Trump’s 2020 campaign zapped out an email fundraiser falsely exclaiming, “NO COLLUSION, NO OBSTRUCTION, COMPLETE AND TOTAL EXONERATION!”)

Though Trump’s alleged obstruction was the focus of the morning’s hearing—with GOPers trying to distract by promoting their favorite conspiracy theories—Mueller’s appearance did call attention to the heart of the matter: the unprecedented attack on the United States, Trump’s effort to exploit it, and Trump’s refusal to recognize Moscow’s assault. Whether or not Trump engaged in active collusion with Vladimir Putin’s regime, he gained the presidency with covert foreign assistance and then abandoned his most fundamental duty: to protect the United States. Arguably, this is more significant than the obstruction issue, for Trump has permitted a foreign power to get away with perverting the foundation of American democracy.

Mueller finished his opening statement by remarking, “Over the course of my career, I’ve seen a number of challenges to our democracy. The Russian government’s effort to interfere in our election is among the most serious.” This could well be taken as criticism of Trump. After all, the president has never accepted this. Doing so would force Trump to acknowledge his own wrongdoing and affirm questions about the legitimacy of the election that landed him in the White House.

A US election was hijacked. Trump stood by as it happened and profited from it. And ever since he has attempted to cover up this original sin of his presidency. At the hearing, Mueller did not rail about Trump’s serious misconduct. But in the quiet way of an institutionalist who respects norms and rules, Mueller made it clear: Trump engaged in treachery. This is not news. But it remains a defining element of the Trump presidency that deserves constant attention.