If you’ve spent enough time on the internet over the last three years, you’ve probably come across Scott Dworkin, a.k.a. @funder. The 36-year-old is the cofounder of a super-PAC called the Democratic Coalition Against Trump, a podcast host, and an occasional guest on MSNBC who devotes much of his life to tweeting about, and sometimes at, President Donald Trump. In Dworkin’s feed, Republicans are guilty of “treason,” the resistance is always winning, and the end of the Trump presidency is imminent. (August 20, 2017: “My guess: Trump will resign in the next 2 weeks.”) When I told him I was working on a story about his group, he emailed back almost immediately with a link to a Medium post documenting its successes—including a list of dozens of trending hashtags it started.

But what has made Dworkin such a polarizing figure—“a fucking abomination,” one Democratic operative complained to the Daily Beast; “a con artist stealing from people whose only crime was to care about their country,” in the words of an opposition researcher—isn’t that he tweets too much. It’s what he’s done with all the money he’s raised. In 2017 and 2018, the Democratic Coalition brought in more than $754,000, most of it from small donors responding to appeals to fuel the “blue wave” and fight back against Trump. Yet even as it boasted of being the preeminent online resistance organization, it spent just $2,350—0.3 percent of what it raised—on independent expenditures supporting Democratic candidates or targeting Republicans. Instead, much of the money went to Dworkin’s consulting firm Bulldog Finance Group for fundraising consulting and to other individuals associated with the super-PAC.

Everything is believable, because everything seems beyond belief.

Dworkin says he’s done everything he’s promised to do, even if his accomplishments are of a harder-to-­quantify, intangible sort. But to his critics, he’s emblematic of a Trump-era phenomenon: resistance grift. The same urgency that has fueled grassroots organizing, fresh new voices, and investigative journalism has also spawned their opposites—organizations that raise money but seem to spend it on nothing substantial; public figures who exploit the spotlight for their own motives; and citizen sleuths hyping dubious information to growing legions of followers. Or, in the case of Michael Avenatti, all of the above.

Capitalizing on political appeals for profit has long been baked into the DNA of the conservative movement, from the rise of direct mail in the 1970s to the financial newsletters and dietary supplement sales of the ’90s and aughts, to a president whose campaign was an exercise in brand promotion and who paid a $25 million settlement for fraud. But the emergence of this kind of profiteering on the left is something new, a product not just of opportunism, but of the acute despair and cynicism spawned by Trump. The president’s vast financial entanglements and habitual bad faith have provided fertile ground for imaginative minds. Everything is believable, because everything seems beyond belief. 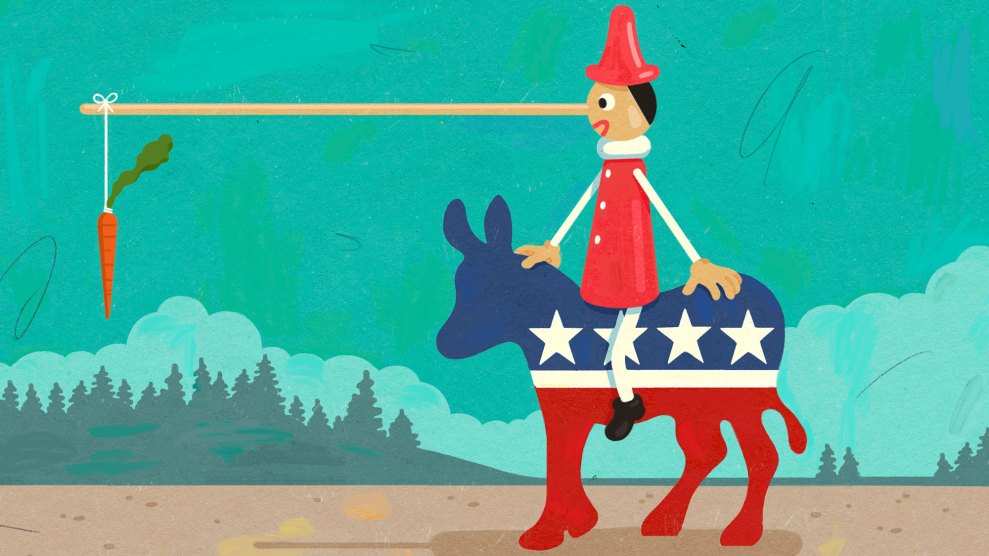 A Quick Guide to Who’s Making Money Off Trump Paranoia

Dworkin, who grew up in North Carolina, got his start in Democratic politics as a digital campaign fundraiser. He launched Bulldog in 2009 and took on a roster of long-shot congressional candidates. Of the roughly 50 House candidates he raised money for over a six-year period, only a handful won. By 2016 that business had dried up, and Dworkin, along with another member of a short-lived group he’d worked on called Draft Biden, branched out by forming Keep America Great, an anti-Trump super-PAC that aimed to raise $20 million before the election.

It didn’t. The super-PAC raised less than 1 percent of its goal. Practically the only thing @funder funded with his super-PAC was businesses he and his associates had ties to. (Much went to his consulting firm.) Keep America Great narrowed its focus to what Dworkin calls “messaging” and “opposition research”—digging up and publishing sometimes wildly speculative information about Trump and Russia. One month before the 2016 election, his group announced it had discovered 249 “Trump companies” in Russia—a titanic scoop if it meant what it sounded like. It didn’t.

“Grifting has some kind of negative intent. We’re patriots.”

When we spoke, Dworkin told me he welcomed the opportunity to set the record straight about his super-PAC. “A grifter would be a person that would present that they’re going to do something and then not do it, when in fact, we do everything that we’ve ever pledged to,” he said. “Grifting has some kind of negative intent. We’re patriots.”

Dworkin argued you can’t compare his group to traditional super-PACs because the nature of its work is different. His group’s focus on online messaging, he said, is a reaction to how the 2016 election played out, when Republicans (aided by Russia) spread phony news on social media to tear down the Democratic nominee. “Stopping that, or combating that, online is a necessity,” he said. “I mean, we are on the front lines to make sure that doesn’t go too far.”

But Dworkin sometimes spreads the kind of misinformation he says he is trying to combat. In 2016, he reported that Mike Pence was leaving the Republican ticket after the disclosure of the infamous Access Hollywood tape. (“I regret nothing about posting it,” Dworkin says.) In a fundraising appeal, he touted his group’s filing of a Freedom of Information Act request for Trump’s correspondence with the IRS—a red herring, because personal IRS correspondence cannot be released under FOIA. In 2017, Dworkin announced that the Democratic Coalition had reported then-Speaker of the House Paul Ryan to the FBI for “obstructing the #TrumpRussia investigations” and “fraud”—an empty stunt since enabling Trump is not a crime. (“I believe we should always create some sort of paper trail regarding any corrupt act,” Dworkin says.)

The report of the “Trump companies” in Russia was characteristic of how Dworkin’s organization gets ahead of its skis. It was kind of true. You could replicate his work by typing the Russian spelling of “Trump” into a database. But Dworkin did not verify that any of those companies belonged to Trump before he hit publish. Dworkin told me that writing “Breaking: 249 Trump companies located IN Russia” was not meant to imply any of them were affiliated with Trump. But, he conceded, “I think I could have done better on how I presented it, that’s for sure.”

The misleading tweets are still up, though, and he continued to tout the figure for months. After the election, the “exclusive” was exhibit 1 in the 38-page “Dworkin Report,” a compendium of his group’s research. A HuffPost contributor’s blog shared by Dworkin around that time boasted that President Barack Obama and Vice President Joe Biden were “reviewing” his sleuthing.* Dworkin acknowledged to me that he couldn’t be sure that anyone in the Obama White House had ever read his report.

But Dworkin sometimes spreads the kind of misinformation he says he is trying to combat.

This kind of rigor wouldn’t pass muster in a newsroom. But when you’re competing for the eyeballs and dollars of hardcore resistance types, putting information out before it’s fully vetted or indulging in thread-length speculation is a good way to get noticed. And Dworkin and his team do find lots of legitimate tidbits. They have scoured videos, social media profiles, and other publicly available channels to churn out iterative nuggets about Trump, some of which do make their way into larger stories at mainstream outlets. To his defenders, that’s enough. “They’re right about most things,” said Christine Pelosi, a Democratic strategist (and daughter of the House speaker) who credits the Coalition for amplifying her unsuccessful efforts in 2016 to get the CIA to brief members of the Electoral College on Trump’s Russia ties. “I don’t see that being a grift. I see that being a relatively good batting average.”

Besides, Dworkin argued, “I’m not driving a Lamborghini.” He and his associates are simply collecting what they’ve earned for the work they’ve done. According to his group’s Federal Election Commission filings for 2017 and 2018, it spent a pittance on a handful of billboards and about $20,000 on digital ads on Facebook and Google. As for the rest of the money: $195,000 went to pay lawyers who helped Dworkin and the Coalition settle a lawsuit with a Trump donor they had accused of being a “supporter [of] terrorist regimes.” Another $400,000 was split among a half-dozen people and firms. Dworkin said he personally took in about $54,000 in 2017 and $36,000 in 2018, after expenses.

And that’s the thing about resistance grift. The phenomenon is real—there are speculative books, monetized Twitter accounts, and Pee Tape prayer candles, all selling hope to an anxious audience. But it hasn’t been that much of a cash cow, largely because liberals are giving their money directly to people who can actually challenge Trump. Democratic candidates shattered fundraising records in 2018.

After two years of buildup, the Mueller report, long hyped by the Democratic Coalition, did present a series of damning findings about the president’s conduct. But Mueller did not, as Dworkin had hoped, “roll up on the White House, haul [Trump] out in handcuffs, make him do a perp walk in front of press and hold him until trial.” And so the Democratic Coalition moved on to the next cause. A few days later, Dworkin emailed his list asking for donations for a new campaign to recruit Republican supporters of impeachment. It was already trending on Twitter.

Correction: An earlier version of this article referred to a Dworkin collaborator. Reference to that person has been removed to avoid any potential confusion between their work and Dworkin’s.