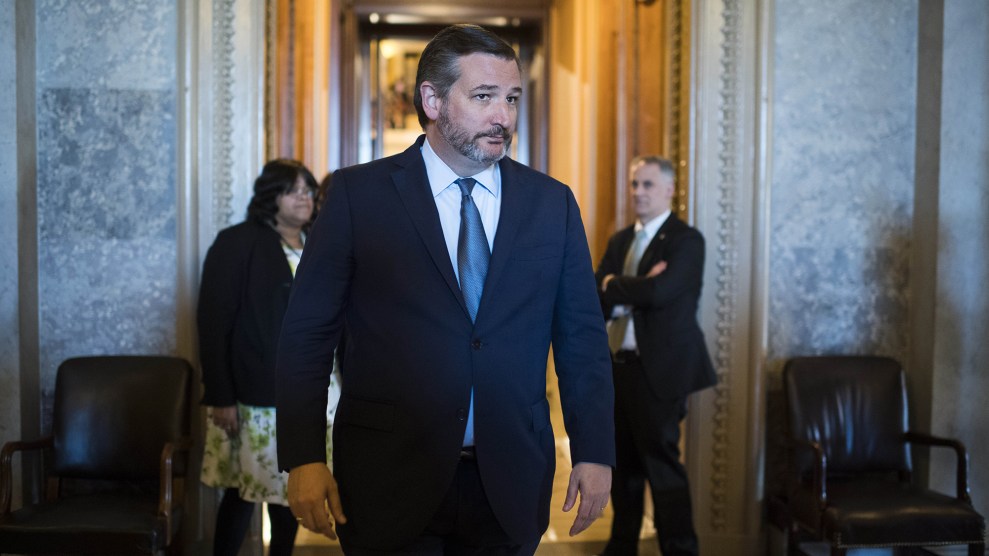 Sen. Ted Cruz in the US Capitol in March. Tom Williams/Congressional Quarterly/Newscom via ZUMA

Sen. Ted Cruz’s legal team compared the Texas Republican to civil rights crusader Rosa Parks in a court filing last week, arguing that Cruz valiantly stood up for his First Amendment rights just like Parks when he lent his campaign more money than he was able to recoup from it.

The day before his reelection on November 6, 2018, Cruz contributed $260,000 of his own money to his campaign against Democrat Beto O’Rourke. Under the 2002 McCain-Feingold campaign finance law, candidates can only reimburse themselves up to $250,000 with funds their campaigns raise after Election Day. Instead of paying himself back from his pre-Election Day war chest, Cruz sued the Federal Election Commission so that he could pay back more than the legal limit from funds raised after Election Day. In the lawsuit, he argues that the campaign finance law prohibiting him from using post-Election Day funds to reimburse himself the final $10,000 violated his free speech rights under the First Amendment.

When the FEC responded to the suit by alleging that Cruz had clearly contrived this scenario in order to challenge the law, Cruz’s team replied in a brief Friday, “Yes, and Rosa Parks could have sat in the back of the bus.” The brief continued, “FEC’s argument essentially faults Plaintiffs for not forfeiting the very constitutional right they seek to vindicate in this litigation.”

The unseemly comparison caused a stir on Twitter. Parks was battling discriminatory Jim Crow laws. Cruz is fighting an anti-corruption statute. The $250,000 limit was intended, as the FEC argues in the case, to prevent actual corruption and the appearance of corruption when a successful candidate goes out and secures large quantities of donations that will go straight into his pocket, possibly in exchange for favors for those donors.

Cruz is represented by big-shot GOP lawyer Chuck Cooper, who is known for taking his losing crusade against same-sex marriage all the way to the Supreme Court in 2013, and for whom Cruz worked in the 1990s. In this case, Cruz and Cooper are arguing that candidates have the right not just to political speech by personally financing their campaigns, but also to be reimbursed for that speech in any manner they choose.

Cruz and Cooper want the case to be assigned to a three-judge panel, a special legal arrangement that is reserved for serious constitutional challenges to election laws. Appeals from these panels go to straight to the Supreme Court, which is obligated to take these cases, creating a fast-track to the highest court and the quickest way to strike down a campaign finance law.

The FEC argues in response that the case does not, in fact, implicate Cruz’s First Amendment rights. “Money that repays a candidate’s personal loan after an election effectively goes into the candidate’s pocket, and not to fund speech or speech-related activities,” the commission argued in its own filings to the federal district court in Washington, DC. “The facts of this case are illustrative. If [Cruz’s campaign] were able to raise an additional $10,000 in post-election contributions to repay Cruz, $5,000 of that amount would replenish ‘personal bank accounts’ and the other $5,000 would satisfy Cruz’s obligation on the ‘margin loan that is secured with Cruz’s  personal assets.’ Either way, no political speech is involved.”

But Cruz and Cooper, who appear to be shooting for a Supreme Court review, contend that when loan repayment is limited, a candidate’s right to contribute is infringed. This provision “burdens this core First Amendment right” to donate to one’s own campaign, Cooper and his team state in their brief, “by restricting the pools of funds that a campaign committee may use to pay off the candidate’s loans and thereby necessarily diminishing, in the FEC’s own words, ‘the likelihood he or she might be repaid.'” They further argue that the provision is not intended to thwart corruption but rather to level the playing field between rich and poor candidates, a goal he argues has not met constitutional muster.

Cruz’s case relies on convincing the courts that just like Rosa Parks, he, a rich candidate short $10,000, is likewise battling a great constitutional injustice.