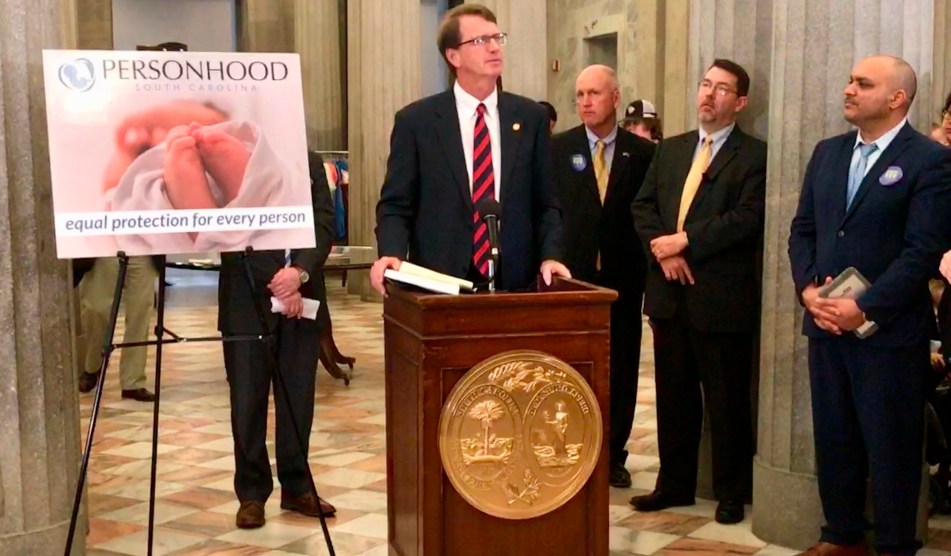 In April, before Alabama and Georgia had passed their laws that define fetuses as “human beings” to outlaw abortion, an Alabama grand jury indicted 27-year-old Marshae Jones for manslaughter after she was shot in the stomach, killing her fetus.

The citizens of Jefferson County decided that Jones “intentionally caused the death of… unborn baby Jones by initiating a fight” with another woman outside a Dollar General in Pleasant Grove, Alabama. The indictment prompted a national outcry, but it made perfect sense to locals: “In the state of Alabama, an unborn baby has the same rights as a living child,” one woman told the New York Times. “Most people agree with it.” On Wednesday, the manslaughter charge against Jones was dropped.

The recent laws banning abortion in Alabama and Georgia hinge on defining a fetus as a “person,” and, in turn, extending the natural rights of personhood to a fetus. Given their nature, the case has become a national flashpoint for the potential legal implications of “fetal personhood,” even beyond the intentions of the staunch anti-abortion advocates who tout it—from jailing women for miscarriages, which is already happening, to challenging the legality of procedures like IVF, which could happen if the premise is taken to its logical extreme. But the concept has been applied haphazardly across the law for decades, says Michelle Goodwin, a law professor at the University of California-Irvine and author of the upcoming book Policing the Womb.

“What this legislation does is it seduces people into thinking that there’s just one aspect of law that addresses personhood,” she said. “And that’s not the case.” If applied across the board, this new legal definition of personhood could have significant consequences on everything from IVF to tort law to medical malpractice. Instead, a patchwork of cases exists in which local prosecutors have uniquely applied personhood to support their arguments—especially those that prosecute women for not caring for a fetus.

“Poor women, especially black women, have been subject to those kinds of prosecutions frankly for decades now,” says Kimberly Mutcherson, a law professor at Rutgers University. “So it’s been easier for the public to kind of ignore what’s going on.”

Lynn Paltrow, executive director of National Advocates for Pregnant Women, documented 413 criminal actions against pregnant women—many of whom delivered healthy babies—between the 1973 Roe v. Wade decision and 2005 in a peer-reviewed study. Women were arrested for falling down stairs, delayed C-sections, and, in one case, a miscarriage. In March 2011, Bei Bei Shuai, a pregnant Indiana woman who tried to kill herself by ingesting rat poison, was initially charged for attempting to kill her fetus. Anna Yocca, a 24-year-old Tennessean, was jailed for more than a year after being charged with “attempted procurement of a miscarriage” for trying to perform a coat hanger abortion in 2015. In Jones County, Mississippi, charging women with child abuse for using drugs while pregnant became a calling card of the local law enforcement apparatus. An Alabama judge recently allowed a man to sue the manufacturer of a pill his girlfriend used to end her pregnancy, on behalf of the aborted fetus.

“Part of what’s really tricky about this,” says Mutcherson, “is they don’t necessarily have to be consistent.” Personhood can be extended to a fetus to block abortions but does not then have to be applied to benefit counting more “people” for the census or to make child support start at conception. Historically, as in Jones’ case, personhood has been used in one direction, Goodwin notes: defining a fetus’s rights broadly when it comes to regulating women’s bodies and doing so loosely otherwise.

“If they have a criminal prosecution of a pregnant woman who uses illegal drugs during her pregnancy,” Mutcherson says, as an example, “the state can make some decisions about fetal personhood in that context as long as they don’t seem to be in violation of Roe vs. Wade.” Personhood arguments are fair game as long as they do not violate the Supreme Court’s rulings or the Constitution. That’s how “in this particular space absurdist notions become rendered alive and real,” Goodwin says.

This particular legal strategy has been attempted by anti-abortion activists since just after Roe v. Wade. The ruling left open the possibility that if “personhood is established, [Roe’s] case, of course, collapses.” By the mid-1980s, after Ronald Reagan became president, the movement gained steam, and state legislatures began passing “fetal homicide laws.” Now enshrined in at least 38 states, they legalized punishing someone (even a pregnant woman) for harm caused to a fetus. Fueled by the racist “crack baby” stereotype, Paltrow says, prosecutors began charging women for delivering drugs to a minor by giving birth and transferring the toxin through the umbilical cord.

“There is no way to add fertilized eggs, embryos, and fetuses to the community of constitutional persons without subtracting pregnant women,” she said.

Legal experts have noted that recognizing personhood is not likely to win over conservative justices—it hints at judicial activism and doesn’t hew strictly to the Constitution. Even if the Supreme Court were to create such a legal precedent, the rights of a fetus would logically have to extend far beyond the abortion debate.

Without an overarching legal ruling, fetal personhood hasn’t had much “application outside of the context where women are punished,” Goodwin says. Imagine the fetuses harmed by environmental factors like contaminated water or toxins in the air. “Those fetuses can’t bring tort litigation,” Goodwin points out. “We don’t see any mass class action coming out of Flint.”

Mutcherson says one can imagine a legal definition for fetal personhood changing nearly all sectors of US law. Pregnant women could arguably drive in the carpool lane, or a “pregnant woman [could] sue you for child support for the cost of her pregnancy.” There could also be a myriad of childhood regulations applied to fetuses. “If you can’t have a child in a bar, then I guess, if you’re pregnant, you shouldn’t be in a bar,” Mutcherson muses. “If I need a passport to travel with my child, do I also need a passport to travel with my fetus?”

Still, “fetal heartbeat” bills that ban abortions after a heartbeat is seemingly detected, often around six weeks, are cropping up in state legislatures across the country. Such legislation borrows heavily from the idea of fetal personhood by invoking the heartbeat of the “unborn human.” For example, the law in Kentucky, which is currently blocked in federal court, bans “the termination of the life of the unborn human individual…whose fetal heartbeat has been detected.” Even the titular idea of a heartbeat across these legislations is specious. The ultrasound detects electrical activity in an embryo: “We are in no way talking about any kind of cardiovascular system,” an OB-GYN told Wired. Still, Alabama’s law describes fetuses as a marginalized group in need of a long-overdue restoration of rights—it rattles off numbers from the Holocaust and the Rwandan genocide as a comparison for the “more than 50 million babies…aborted in the United States since the Roe decision in 1973.”

This has led to considerations regarding potential “positive” byproducts of a personhood ruling, says Mutcherson, like a lawsuit that takes on sources of pollution that lead to poor fetal health. A group could, in theory, collect all the pregnant women in an area and sue on behalf of the unborn children. But Mutcherson cautions that this is unlikely. Advocacy groups—and lawyers generally—would not want to win based on fetal personhood and then have to fight for that definition going forward.

“For people who think the fetus is a person,” Mutcherson notes, “it’s sort of incredible how little they’re doing outside of trying to make abortion illegal to actually protect fetuses and certainly to actually protect children.” Alabama, Georgia, Mississippi, and Missouri are all pushing abortion bans, but lawmakers there refused to expand the Affordable Care Act, leaving many pregnant women without health care.

This story has been updated to reflect breakings news in the Marshae Jones case.