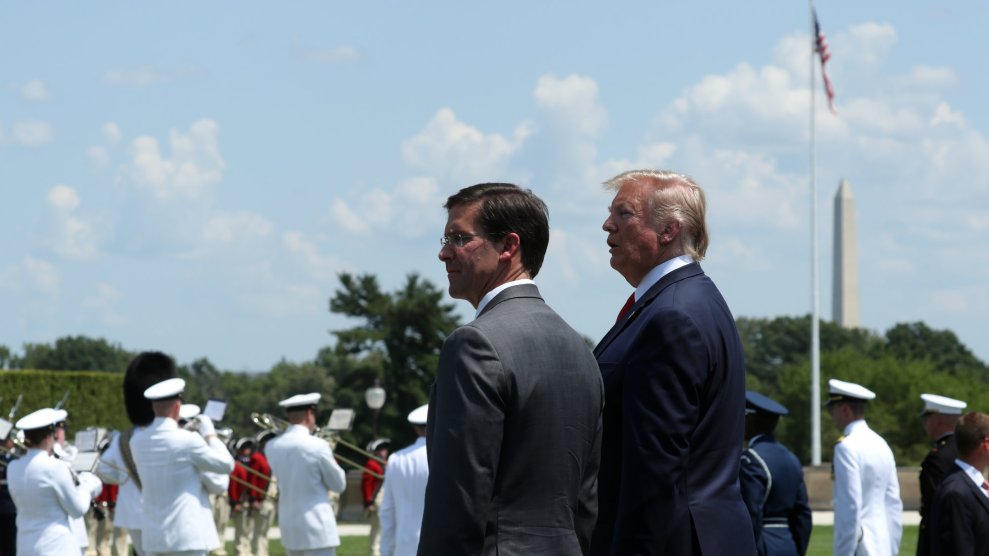 One day after taking over as the Pentagon’s first Senate-confirmed leader in seven months, new Secretary of Defense Mark Esper was asked by a reporter to assess what the impact has been of the months-long lack of stable leadership at the largest federal agency. His careful answer attempted to endorse the department’s vast civilian workforce, whose ranks have been depleted since the exit of President Trump’s first defense secretary, James Mattis, while also providing reassurance.

“We have a great cadre of DOD civilians,” Esper responded. “I’m confident we didn’t miss any beats, any steps if you will.”

That same day, the Pentagon’s internal watchdog released a 418-page rebuttal to the notion that the Defense Department “didn’t miss any beats” during the last seven months, when temporary officials have increasingly taken more active roles among the Pentagon’s leadership. On Wednesday, the Office of the Inspector General, which itself is run by an acting leader, published its second-ever list of all recommendations the office has made to Defense officials, but which remain unfulfilled—not because DOD officials disagree with them, though sometimes they do, but because the department simply never followed through.

Resolving these issues is a crucial step toward combating the waste, fraud, and abuse that have bedeviled DOD management for decades, and the Pentagon has agreed to address hundreds of them. But with so many of these action items unresolved, there is still no indication that any timeline exists for dealing with them. And the problem has been getting worse. Eighty suggestions included in the report are at least five years old—a 42 percent increase from the prior year—and 30 of them, on topics like military suicides and contractor price gouging, are what the IG’s office considers “high-priority.”

Across the department, Pentagon officials could save up to $4.8 billion by adopting just half of the IG’s unresolved recommendations, the report claims. Some of these recommendations are so plainly simple, it is surprising that they have remained unaddressed after so many years. A May 2013 report from the inspector general’s office, for instance, questioned if the Army’s combat helmet was being properly evaluated and advised officials to adjust those metrics if the qualities of the helmet did not meet soldiers’ needs. Even though the military has “performed analysis and testing to the design of the helmet,” officials still have not figured out if the way the standard by which the helmet is being tested needs to change, which was one of the IG’s office original requests. “Failure to modify the test protocols as needed can result in helmets that do not protect the warfighter as intended, risking life and safety,” reads this week’s report, written six years later.

Written in classic bureaucratic prose, these IG reports often underline a common theme: the breakdown of communications across multiple, separate channels. In an organization as sprawling as DOD, the effect of one unit not coordinating with another can be devastating. Nowhere is this more apparent than in the way Pentagon officials investigate suicides by active-duty service members, which have risen precipitously since the start of the wars in Afghanistan and Iraq. When a possible suicide occurs, a team of local military officers compiles an event report that, ideally, includes the circumstances of the death and relevant details on the service member’s mental health and medical history. But the IG’s office found back in 2014, the start of an American-led intervention in Syria to combat the Islamic State, that these reports were frequently submitted too early and failed to incorporate information from a wide range of sources like law enforcement records or medical examiner reports. The result? Inconclusive reports that masked how severe the increase in suicides had become. Even though the Pentagon issued a department-wide directive in November 2017 that refined how the suicide prevention unit functions, the IG’s office found that letter “deficient” and problems persisted.

Unless the department updates its procedures, DOD “will have difficulty conducting accurate trend or causal analysis necessary for developing effective suicide prevention policy and programs to reduce suicide rates across the force,” the IG’s office concluded this week. And this is where the severe staffing shortage comes into play. The Pentagon’s Personnel and Readiness division, which includes its suicide prevention unit, has not had a permanent leader since its last Senate-confirmed head, Robert Wilkie, left to become secretary of veterans affairs a year ago. After months of cycling through acting directors, the Defense Suicide Prevention Office only picked a new permanent leader in March.

Wasteful decisions by contracting officers and malfeasance by defense firms were also highlighted by the IG’s report, including, most recently, TransDigm, a contractor that overcharged the Pentagon so egregiously on spare parts for military aircraft over the last four years, that it agreed to repay the government $16.1 million. Since 1998, the IG’s office has issued 32 reports related to how the DOD charges contractors for spare parts, which it requires when military assets break down or are damaged. “We have issued 32 audit reports related to spare parts pricing,” acting Pentagon inspector general Glenn Fine said at a House Oversight and Reform Committee hearing in May. “In only 3 of the 32 reports did we find that the DOD had obtained fair and reasonable prices for these parts.”

Fine’s office recommended that DOD reform its policy for obtaining spare parts, but repeatedly found that despite some progress, the Pentagon was committing the same mistakes. The most obvious, recent example was markups that “ranged from 17 to 4,436 percent,” the Intercept reported.

Even after this latest boondoggle, which led to TransDigm’s founder getting a verbal spanking from lawmakers at that same May hearing, the Pentagon has still dragged its feet on implementing changes to its acquisition guidelines. Since the IG’s office submitted its TransDigm audit on February 25, Defense officials have only completed two of its nine recommendations, including crucial updates to the department’s own regulations governing the type of “sole-source” contracts that left TransDigm with a windfall. DOD’s acquisition unit has had the same leader, under secretary Ellen Lord, for nearly two years, and recently divided its office into two compartments while restoring most responsibility for acquisition back to the Services, a “major reform whose consequences have yet to be fully felt,” Breaking Defense reported in December.

These requests from the Pentagon inspector general might seem relatively benign but are obviously not exceeding the limits of what government bureaucrats or military officers are capable of doing. That’s why the Pentagon, under both Trump and President Barack Obama, agreed with more than 93 percent of the IG’s 1,581 open recommendations. But amid a swirl of turnover at the top of the Pentagon and a rotating series of acting officials taking on greater responsibilities indefinitely, not-so-little details seem to continue falling through the cracks. In Esper’s first letter to DOD employees last month as acting Defense secretary, he urged staffers to “look for smarter, more effective ways to do business, and empower your teams to innovate and take prudent risk where necessary.” Now the department has 1,581 places to start.