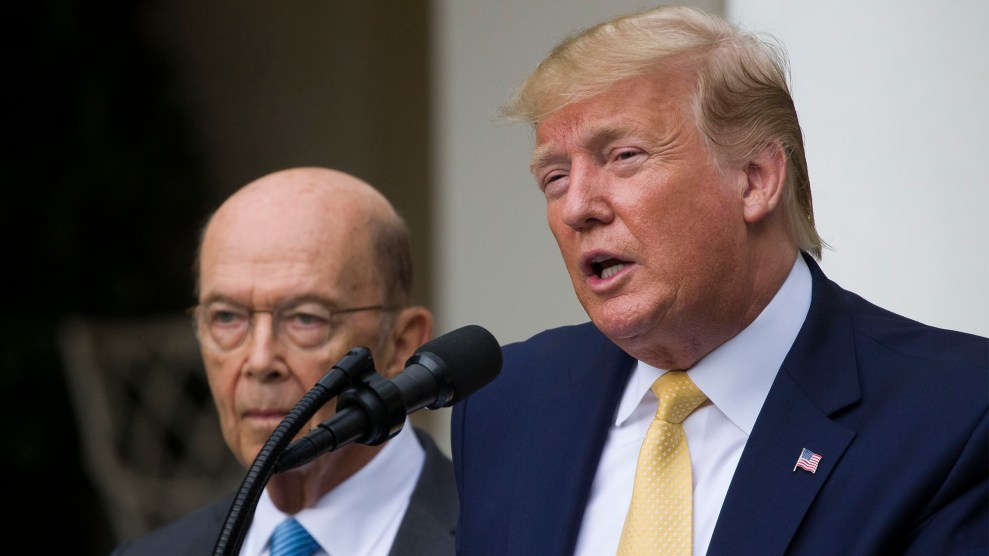 President Donald Trump, accompanied by Commerce Secretary Wilbur Ross, speaks about the 2020 census in the Rose Garden of the White House on July 11.Alex Brandon/AP

Last Thursday, President Donald Trump dropped his bid to add a citizenship question to the 2020 census, abandoning a push that was expected to lead to a severe undercount of communities of color. But on the same day, he made another move that could still cause a massive shift in power to white Republican areas during the next redistricting cycle in 2021.

Trump issued an executive order calling on the Census Bureau to gather citizenship data using administrative records. In announcing the order in the White House Rose Garden, Trump suggested how that data might be used: “Some states may want to draw state and local legislative districts based upon the voter-eligible population.”

That’s a radical proposal. GOP officials have already been contemplating drawing districts based on citizenship, which would be a huge boon for Republicans, who overwhelmingly represent areas with fewer immigrants. (Democrats represent 95 of the 100 House districts with the highest percentage of foreign-born residents.) Drawing districts based on eligible voters rather than just citizens, as Trump suggested, would benefit white Republicans even more. The overwhelming majority of American citizens who aren’t eligible to vote are children, and more than half of all children born in the United States are now nonwhite. Ceasing to count them would take even more political power away from cities, regions, and states with large minority populations.

That might be the point. Thomas Hofeller, the GOP’s late gerrymandering mastermind who initiated the push for the citizenship question, wrote in 2015 that drawing districts based on the citizen voting-age population “would clearly be a disadvantage to the Democrats” and “advantageous to Republicans and Non-Hispanic Whites.” Throughout the legal debate over the citizenship question, the administration argued, dubiously, that the question was needed to better enforce the Voting Right Act. But now Trump seems to be making clear that the intention all along was to change the system for allocating political representation.

Republicans have tried this before—and failed. In 2015, a conservative group that had challenged the constitutionality of the Voting Rights Act sought to force the state of Texas to draw state legislative districts based on citizens or eligible voters instead of total population. Hofeller noted that this would “decrease representation for Hispanics, who tend to vote Democratic, and increase representation for white Republicans.”

The Supreme Court unanimously ruled against the conservative challengers in Evenwel v. Abbott, finding that they could not force Texas to abandon total population as the metric for drawing legislative districts. “Nonvoters have an important stake in many policy debates and in receiving constituent services,” Justice Ruth Bader Ginsburg wrote for the court’s majority. “By ensuring that each representative is subject to requests and suggestions from the same number of constituents, total-population apportionment promotes equitable and effective representation.”

Excluding noncitizens or nonvoters from counting toward representation would facilitate a whole new round of extreme gerrymandering.

However, the court did not decide whether a state could choose to draw legislative districts based on a different standard in the future. “Whether a State is permitted to use some measure other than total population is an important and sensitive question that we can consider if and when we have before us a state districting plan that, unlike the current Texas plan, uses something other than total population as the basis for equalizing the size of districts,” Justice Samuel Alito wrote in a concurring opinion.

Part of the problem for the conservative challengers was that states did not possess the data needed to draw districts based on citizenship. Thanks to Trump’s executive order, they will in 2021. The administration is practically begging Republican-controlled states to draw districts based on citizenship or voter eligibility during the next redistricting cycle. (That would no doubt bring a new challenge before the Supreme Court, which has moved to the right since the Evenwel decision.) “I understand that some State officials are interested in such [citizenship] data for districting purposes,” Trump wrote in his executive order. “This order will assist the [Commerce] Department in securing the most accurate and complete citizenship data so that it can respond to such requests from the States.”

Excluding noncitizens or nonvoters from counting toward representation would facilitate a whole new round of extreme gerrymandering in 2021, especially since the Supreme Court ruled last month that federal courts cannot strike down partisan gerrymandering. GOP legislators could pack even more people of color into a small number of districts, since many of them wouldn’t be counted, leaving more majority-white and Republican districts. Using voting-eligible population instead of total population as the metric for drawing districts would exclude 55 percent of Latinos, 45 percent of Asian Americans, and 30 percent of African Americans from being counted, according to a brief filed by the Leadership Conference on Civil Rights before the Supreme Court in 2015. “This would amount to a massive shift in political power away from groups that are already disadvantaged in the political process and further concentrate power in the hands of a white plurality that does not adequately represent the full diversity of the total population,” the group said.

This is already becoming an issue in the 2020 presidential race. Last week, Sen. Cory Booker (D-N.J.) introduced a bill that would prevent the Census Bureau from sharing citizenship data with states for the purpose of redistricting. That move was also supported by presidential candidates Elizabeth Warren and Julián Castro. “To be clear, redistricting based on citizenship data will push communities of color—which are already dramatically undercounted—farther into the shadows,” Booker said.