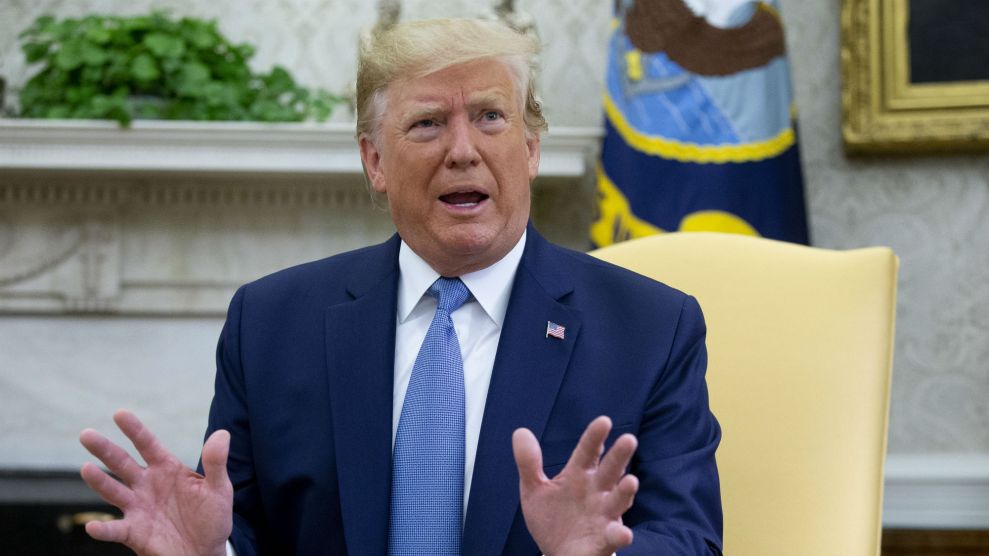 President Donald Trump opened a new front in the battle to protect his tax returns from any prying Democratic eyes, filing a lawsuit against the congressional committee seeking his returns, as well as two top New York state officials.

Trump’s lawsuit has targets the House Ways and Means Committee and New York’s attorney general and tax and finance commissioner. The Ways and Means Committee has a legal right to request anyone’s tax returns from the Internal Revenue Service and is locked in a legal battle with Trump over its attempt to invoke that law. Now, the president appears to be attempting to prevent any attempts to get his returns through a side door. That door was opened by the New York legislature this spring, when it passed a law allowing state authorities to provide copies of a person’s state tax returns to the Ways and Means Committee if it has already tried—and failed—to get the returns from the IRS.

Trump’s lawsuit asks for an injunction to prevent New York from turning over his tax records to Congress.

In its request for Trump’s tax returns, the Ways and Means committee specifically said it was asking to see the records as part of an investigation into how the IRS audits presidents. But Treasury Secretary Steve Mnuchin rejected the committee’s request this spring, saying that the committee had no real purpose for getting the president’s tax returns, other than to embarrass and politically damage him.

Although Ways and Means Committee chairman Richard Neal (D-Mass.) has said he won’t be taking New York up on its offer to supply Trump’s state returns, Trump’s lawsuit—filed as a private citizen using his own lawyers, not Department of Justice attorneys—contends that Neal might be wavering. Specifically, the suit cites an NBC News article from Monday that claimed Neal is under increasing pressure from progressives in the Democratic Party to be more aggressive in his effort to get Trump’s tax returns. The suit also cites the fact that Neal now has a primary challenger.

Trump’s lawsuit claims that if New York authorities, specifically the state attorney general and the New York Department of Taxation and Finance, were allowed to hand over Trump’s state tax records, it would violate his First Amendment rights because it would be done purely to punish him for his political beliefs. Trump’s lawsuit also claims that it would be unfair because he would have no opportunity to argue against the release, and that the records are out of Neal’s jurisdiction because they are state and not federal tax records.

“President Trump has spent his career hiding behind lawsuits, but, as New York’s chief law enforcement officer, I can assure him that no one is above the law—not even the president of the United States,” New York Attorney General Letitia James said in a statement, adding, “We have all the confidence that this law is legal and we will vigorously defend it against any court challenge.”

A spokeswoman for Neal did not respond to a request for comment, nor did the Department of Taxation and Finance.