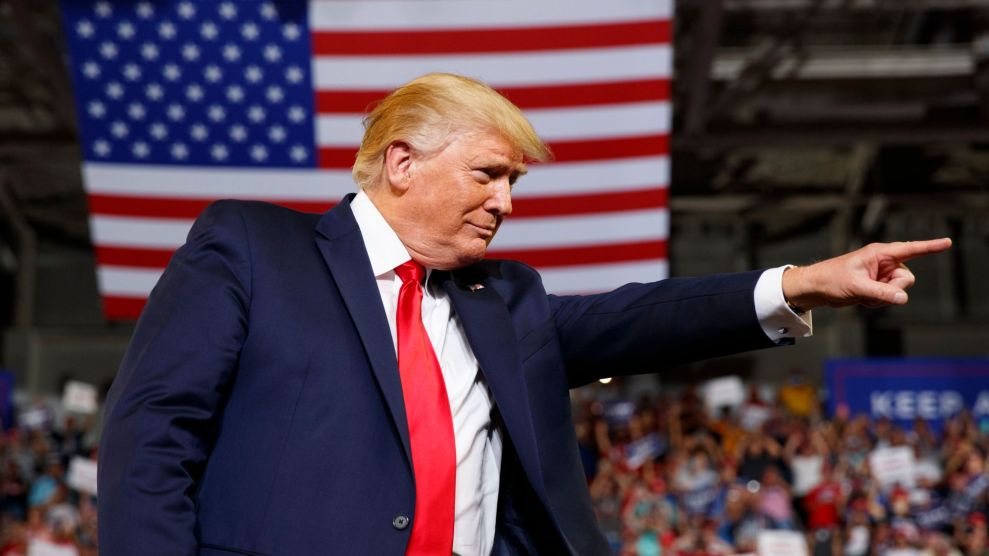 Near the beginning of his campaign rally Wednesday evening, Donald Trump let loose a string of insults and smears against the four congresswomen of color who he’d previously said should “go back” to the countries they came from. All four lawmakers—Ilhan Omar of Minnesota, Alexandria Ocasio-Cortez of New York, Rashida Tlaib of Michigan, and Ayanna Pressley of Massachusetts—are US citizens. All but Omar, who emigrated from war-torn Somalia as a child, were born here. Omar and Tlaib went on to become the first Muslim women to serve in Congress.

But Trump and his adoring fans in Greenville, North Carolina, don’t think these members of Congress qualify as Americans. As the president did his best to link Omar to Islamic terrorists, the crowd broke into a chant of “Send her back, send her back.” Trump paused his speech and basked in the moment. He seemed to realize he’d hit upon this election’s version of the infamous “Lock her up” chant. Once in office, Trump attempted to follow through on his 2016 campaign rhetoric about sending Hillary Clinton to prison. He and his supporters have now singled out Omar as their new enemy, one whose very presence in the country they view as illegitimate.

Crowd at tonight's Trump rally in North Carolina breaks out into chants of "Send her back!" as the president attacks Rep. Ilhan Omar pic.twitter.com/0q5L39W61h

It was an appalling moment, but not a particularly surprising one. From the beginning, Trump has made it clear that he doesn’t want people like Omar in the country. On the campaign trail in 2015, he called for a “total and complete shutdown of Muslims entering the United States.” Days before the election, he flew to Omar’s home city of Minneapolis and criticized the “large numbers of Somali refugees coming into your state.” Once in office, Trump issued a travel ban barring visas for people from Somalia.

In his speech, Trump blasted Omar and her colleagues for daring to criticize his administration. “If they don’t love it, tell them to leave it,” the president said—though he added that “they can come back.”

Trump also took time to praise North Carolina Rep. Mark Meadows, a right-wing congressman with a history that is particularly relevant to the Republican Party’s embrace of the “send her back” theme. On the stump in 2012, Meadows declared that “we are going to send Mr. Obama home to Kenya or wherever it is”—a reference to the racist birther smear that Trump helped popularize.

Meadows was one of 187 Republicans to vote against condemning Trump’s racist tweets this week. Just four Republicans voted for the resolution. Fifty-seven percent of Republican respondents who were familiar with the president’s “go back” comments said they agreed with them, according to a USA Today Ipsos poll. The party has made its position clear: Progressive people of color should leave the country.

Most Americans disagree, however. The same poll found that 68 percent thought that Trump’s comments were “offensive,” and 59 percent called them “un-American.”