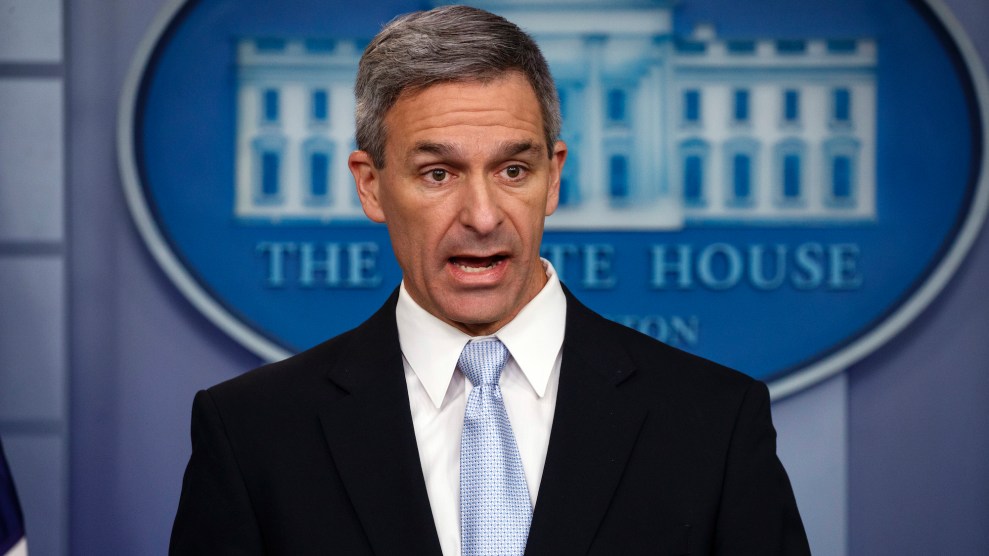 On Monday, while rolling out a sweeping rule designed to make it harder for working-class immigrants to get legal residency, US Citizenship and Immigration Services Acting Director Ken Cuccinelli turned to his family’s history. When his Italian American grandfather, Dominick, brought two of his cousins to the United States in the 1950s, he made sure they spoke English and could provide for their own needs, Cuccinelli said. The USCIS director returned to that story in an op-ed published the next morning by CNN and in an interview with the station later that evening.

The new “public charge” rule Cuccinelli is pushing would deny green cards to people immigration officials decide are likely to use even small amounts of government assistance. The policy has the potential to deny permanent legal residency to hundreds of thousands of people and could end up being the Trump administration’s most significant attack on legal immigration.

Cuccinelli’s decision to justify the policy using his own family’s story raises an obvious question: Would the Cuccinellis have been let in under the new rule? Fortunately, a person named Ken Cuccinelli—the name of both the USCIS director and his father—started filling in a highly detailed family tree on Ancestry.com in November 2018 and continued updating the tree as recently as July. (USCIS did not respond to a request for comment about whom the account belongs to.)

According to the family tree, Cuccinelli’s great-grandfather Dominic Cucciniello was born in 1875 in the south of the newly formed nation of Italy and came to the United States in 1896. On his 1930 census form, Dominic, then a 54-year-old US citizen, stated that he was a laborer and homeowner in Hoboken, New Jersey. At the time, the census gauged Americans’ wealth and status by asking whether they owned a radio; Dominic did not. By the time of the 1940 census, he had bought a home in Jersey City worth $5,000, about $90,000 in today’s money. He appeared to be retired at 65 after completing zero years of schooling.

He had made a life for his family in America, despite being the type of person the new public charge rule might exclude. Charles Kuck, a Georgia-based lawyer and former president of the American Immigration Lawyers Association, says that in light of Cuccinelli’s likely family history, “Cuccinelli has no idea what he is talking about and would just as happily exclude and deport his own family.”

Dominick Cuccinelli, a son of Dominic Cucciniello, was born in 1910 in New Jersey, but only barely. Ken Cuccinelli Jr.’s grandfather was conceived in Italy and then born in a home in Hoboken, according to an email from Ken Sr. that Ken Jr. posted to Facebook in 2011. Dominick was a US citizen by birthright and went on to complete five grades of school. In 1940, he was an unemployed truck driver who had been looking for work for five weeks. He had worked a total of 16 weeks the year before, earning $350 in total. (The average income in the United States that year was $1,368.) Still, his situation was not unusual in the wake of the Great Depression, when unemployment averaged 18 percent throughout the 1930s. Ken Sr. wrote in the 2011 email that Dominick “was a diligent worker that was not stopped by injuries, illness, or other maladies that often would take his peers out of the game.”

Cuccinelli’s great-grandfather Dominic Cucciniello, who was born in Italy and had no schooling, was the type of person the new public charge rule might exclude.

In 1954, Dominick brought his relatives Mario and Silvio over to the United States, according to Cuccinelli’s statements and travel records posted to Ancestry.com. Mario and Silvio’s father, Luigi Cucciniello, Dominick’s first cousin, came with them. Dominick’s son, Ken Cuccinelli Sr., went on to get an engineering degree from Catholic University in 1967 and become a vice president at a natural gas company. Ken Jr. went to a Jesuit high school in Washington, DC, the University of Virginia, and George Mason Law School. He was elected to the Virginia state senate in 2002 and became the state’s attorney general in 2010. In 2013, after securing the Republican nomination for governor, he lost to Terry McAuliffe. Trump named him acting director of USCIS in June.

Cuccinelli’s claim that he isn’t pulling up the ladder on people like his own ancestors is a strange one. His argument is essentially that when his family came, there wasn’t as strong a social safety net as today. Now that permanent residents can access government assistance like Medicaid, the United States needs to make sure it doesn’t admit people who will end up using those programs, he says. (Federal law explicitly allows green card holders to receive these benefits, though generally not until five years after receiving permanent residency status.)

The public charge rule has been on the books since 1882. It was originally intended to keep out people deemed likely to end up in poor houses and become completely dependent on the government. Under guidelines created in 1999, the rule applied only to people expected to receive most of their income from the government, a high bar that allowed the vast majority of people to pass the public charge test.

Opponents of the new rule, which sets a much lower bar, have argued that the real goal is to admit fewer black and brown immigrants from the countries President Donald Trump routinely denigrates, since immigrants from Africa, the Caribbean, Central America, and Mexico are expected to be the most affected. Cuccinelli has done little to dispel that notion. At the rollout of the new rule on Monday, a reporter asked Cuccinelli whether the United States was still the nation that, in the words of the Emma Lazarus poem enshrined at the Statue of Liberty, asked other countries to “give me your tired, your poor.” Cuccinelli said he wasn’t prepared to take anything off Lady Liberty. Then, in an interview with NPR on Tuesday morning, he proposed an addition: “Give me your tired and your poor who can stand on their own two feet and who will not become a public charge.”

That evening, CNN’s Erin Burnett replayed the clip of Cuccinelli’s poem revision before asking him what he thinks America stands for. Cuccinelli’s response provided a less convoluted explanation for why he might support excluding poor immigrants today. “Well, of course that poem was referring back to people coming from Europe,” he said.