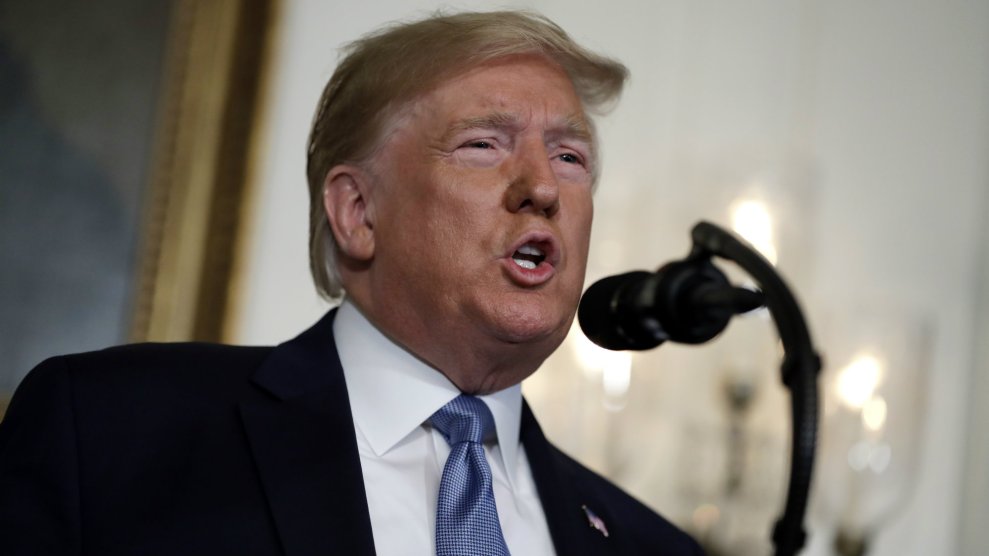 The timing could not have been worse. The Senate, which has to confirm Trump’s eventual nominee, is out of session until September 6, and Coats’ resignation takes effect on August 15. With slightly more than a week to spare, the question of who will replace Trump’s principal intelligence adviser in an acting capacity still has not been resolved. Under normal circumstances, Coats’ deputy—in this case, the eminently qualified, longtime CIA analyst Susan Gordon—would become intelligence director temporarily. But the New York Times reported that the White House is weighing a legally dubious option to “circumvent” her, so that Trump would be able to choose someone more to his liking to deliver his daily intelligence briefings.

With the Senate on recess until after Labor Day, the person Trump eventually taps as acting director will play a central role during an especially tense period for national security policy. In recent months, Trump ramped up tensions with Iran, supported a failed coup attempt in Venezuela, escalated his trade war with China, and broached the idea of a third summit with North Korean dictator Kim Jong Un. Moreover, Trump’s undisguised animosity for intelligence professionals, who he once compared to Nazis, makes the director’s role especially important in safeguarding against politicizing intelligence. Trump repeatedly clashed with Coats over intelligence community conclusions that the president preferred to ignore—including that Russia interfered in the 2016 election to benefit Trump. The animosity reached a fever pitch in January after Coats and other intelligence chiefs provided testimony to the Senate on Iran, North Korea, and other issues that diverged from Trump’s views. “Perhaps Intelligence should go back to school!” Trump tweeted.

The primary responsibility for the director of national intelligence is to coordinate among the various intelligence agencies, a job that historically (and temporarily) could be managed by the CIA director. But at least four government agencies, including the National Counterterrorism Center and National Counterproliferation Center, report up to the DNI directly and an extended vacancy in the role would create difficulties in managing their work.

It’s not clear why Trump soured on Coats’ deputy, but Gordon’s association with him and the breadth of her intelligence background likely provides some clues. She’s a veteran CIA operative with nearly three decades of experience across the entire agency, including stints in each of its directorates. Her colleagues in the intelligence community view her with “literally universal respect,” David Priess, a former CIA officer and author of The President’s Book of Secrets, a book about the President’s Daily Brief, told me. When choosing top government appointees, Trump has repeatedly emphasized loyalty to him over experience in the role and, in Gordon, he was unlikely to find a kindred spirit. “I couldn’t tell you to save my life what her partisan views are,” Priess said, “even if she has any.”

This is in stark contrast to his initial choice, whose views were no secret. As a frequent guest on Fox News, Rep. Ratcliffe garnered a reputation as one of the Mueller investigation’s top critics and routinely peddled conspiracy theories that pitted career national security officials against Trump. It wasn’t hard to see why Trump took a liking to him, but moderate Republicans—including, crucially, Senate Intelligence Committee members—showed far less enthusiasm for replacing Coats, a career diplomat and senior lawmaker, with a three-term member of Congress who embellished parts of his already-thin resume. Only five days after his nomination, his name was withdrawn. With Ratcliffe gone, Trump still has to appoint a permanent intelligence director, but more pressingly, there is the question of what to do about Gordon.

The 2004 law that created the director of national intelligence outlines a solution—it’s just not one that Trump likes. Robert Chesney, a University of Texas law professor and co-founder of the national security blog Lawfare, told me in an email, that the law “requires that the Principal Deputy Director (Sue Gordon, at least for now) ‘shall’ be the Acting Director in the event of a DNI vacancy.” Trump may try to skirt the statute by claiming he has broad authority under the Federal Vacancies Reform Act to designate acting officials, but, in a piece for Lawfare, Chesney argued that the wording of the 2004 statute “would seem to override the discretion that the president otherwise would have enjoyed” under the vacancies law.

This is not the first time that Trump has waded into similarly murky legal territory. When Jeff Sessions resigned as attorney general in November, rather than replace him with deputy attorney general Rod Rosenstein, Trump went further down the chain of command to elevate Sessions’ chief of staff, Matt Whitaker, who, unlike Rosenstein, had publicly criticized the Mueller investigation. Unlike the DNI-specific statute, which says the No. 2 official “shall” serve in the event of a vacancy at the top, the law pertaining to the Justice Department only says the deputy attorney general “may” fill the vacancy. This wiggle room gave Trump a legal advantage, even as Senate Democrats and more than a dozen state attorneys general argued otherwise.

If Chesney’s reading of the law is correct, no such ambiguity exists in this situation. Trump is stuck with Gordon, who he apparently barred from briefing him during a recent trip to the White House, unless she resigns or he fires her. Despite support from Senate Intelligence Committee Chair Richard Burr (R-N.C.) and praise from none other than Rosenstein, who called her a “proven patriot” on Twitter, Gordon seems prepared to step down quietly. Officials told the Times that Gordon “will retire if told by the White House that Mr. Trump wants someone else in the deputy’s role.” With Gordon out of the picture, Trump would have the option under existing law to appoint any Senate-confirmed official or ODNI employees at the government’s top pay scale who have served at least 90 days.

Last week, the White House requested a list of current ODNI employees with those qualifications.