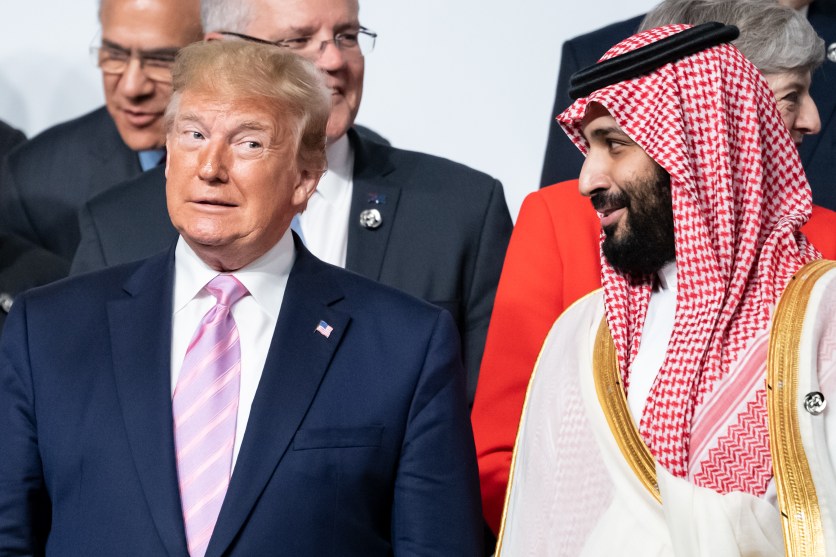 Donald Trump and Mohammed bin Salman, Crown Prince of Saudi Arabia, with other heads of state at the G20 summit in Osaka, Japan, on June 28, 2019Bernd von Jutrczenka/picture alliance via Getty Images

The House Intelligence Committee is ramping up an investigation into alleged efforts by Saudi Arabia and other Persian Gulf states to use financial inducements and other means to win favorable policies from the Trump administration. Starting in April, the panel “issued several subpoenas and requests for information relating to Gulf influence, and we have received documents from certain witnesses,” a committee official says. “We expect to issue another wave of requests shortly.”

Intelligence Committee Chair Adam Schiff (D-Calif.) has previously said the panel would conduct a “deep dive” into US relations with Saudi Arabia and other Middle Eastern countries. As part of that effort, the committee is investigating “the extent to which Saudi Arabia or other Gulf states have sought to influence the Trump campaign, transition, and administration so as to encourage the administration to pursue policies antithetical to US interests,” the committee official says.

Schiff said this probe was necessitated by special counsel Robert Mueller’s decision to limit his investigation to Russian interference, even though the order appointing Mueller authorized him to look into “any matters that arose” from his investigation. The Special Counsel did not ask “whether financial inducements from any Gulf nations were influencing this US policy, since it is outside the four corners of your report, and so we must find out,” Schiff told Mueller at the conclusion of the special counsel’s testimony before the intelligence committee last month.

There is little question that Trump and his White House have been eager to advance the interests of Saudi Arabia and the United Arab Emirates, along with those of Israel, an unofficial but close ally of those two states. The administration’s combative policy toward Iran reflects the preference of those three countries, which have lobbied for the United States to take their side in regional disputes. Trump and his top aides have refused to condemn Saudi Crown Prince Mohammed bin Salman’s reported role in Khashoggi’s murder. And Trump has rejected congressional efforts to limit arms sales to Saudi Arabia and the UAE and to limit US support for their brutal war in Yemen.

The Intelligence Committee investigation aims at revealing how the Gulf states have gained such influence. The panel is not saying exactly who it is contacting, but there are plenty of previously disclosed matters it could be expected to pursue: Trump and several top aides and associates have had financial dealings or unexplained contacts with Gulf state regimes or their emissaries.

The committee is likely seeking information on an August 3, 2016, meeting in Trump Tower that Donald Trump Jr. held with Erik Prince, the former head of private military contracting firm Blackwater; an Israeli social media specialist named Joel Zamel; and George Nader, then an adviser to the de facto head of the UAE, Mohammed bin Zayed, the crown prince of Abu Dhabi, who goes by MBZ. (Prince, a GOP fundraiser and the brother of Education Secretary Betsy DeVos, developed ties to bin Zayed after supplying him with a personal guard of mercenaries from Colombia.) During the meeting, Nader told Trump Jr. that Saudi and Emirati leaders were eager to help his father win the election, according to the New York Times. The three men also offered to help the Trump campaign through social media manipulation by Zamel’s company, Psy-Group, which billed itself as private intelligence firm with expertise at covertly spreading messages to influence voters. Trump Jr. has claimed the campaign rejected that offer. Zamel denied launching any influence campaign to boost Trump. After the election, Nader wired Zamel $2 million. It’s not clear why.

Nader is currently imprisoned on charges of possession of child pornography and transporting a 14-year-old boy for sexual activity. At the time of the Trump Tower meeting, Nader’s record included past convictions for child pornography and sexually abusing minors. Still, after the Trump Tower meeting, he developed ties to multiple Trump campaign officials. According to the Times, Nader, acting as an Emirati emissary, met frequently during the campaign and transition with Jared Kushner, Trump’s son-in-law, and Michael Flynn, who became Trump’s national security adviser before he was fired. Nader also helped arrange two mysterious meetings, brokered by MBZ, between Prince and Kirill Dmitriev, the head of Russia’s sovereign wealth fund, in Seychelles in early January 2017. The Mueller report says Dmitriev, acting as an emissary for Russian President Vladimir Putin, hoped to cultivate ties to the Trump administration. The Emirates evidently hoped to gain favor with Trump by arranging the meetings.

The committee in July subpoenaed Flynn and Rick Gates, a former Trump campaign official who was in contact with Zamel in 2016. Schiff said last month that Gates had begun providing documents to the committee. The panel has also started receiving evidence from Mueller’s investigation such as FBI 302s. That material could shed light on activity by Nader and other Gulf state influence efforts.

Nader also developed ties to Elliott Broidy, then a major Republican fundraiser. In 2017 Nader offered to help a security firm Broidy owns win contracts from the UAE and Saudi Arabia. (Broidy later landed a contract with the UAE worth more than $200 million.) At the same time, Broidy used his contacts with Trump and other administration officials to press Emirati and Saudi interests in Washington, including advocating for the firing of Secretary of State Rex Tillerson, who the two Gulf states saw as too friendly to Qatar, their rival in a regional dispute. Federal prosecutors are reportedly investigating Broidy’s ties to Nader and other matters.

Kushner, whom Trump tasked with developing a Middle East peace plan, is famously close to bin Salman. The Saudi autocrat known as MBS has bragged that he has Kushner in his pocket, according to the Intercept. Kushner has also faced questions over whether Qatar sought to buy influence with him through the purchase of a 99-year lease on a Kushner family–owned building at 666 Fifth Avenue in Manhattan. Brookfield Asset Management, a firm partly owned by the Qatar’s sovereign wealth fund, made the deal last year. The sale bailed out Kushner, whose 2007 decision to buy the building for a record-setting $1.8 billion threatened to sink the family’s business. Brookfield and Kushner have denied the purchase reflected any political calculus.

Flynn, who admitted as part of a 2017 plea bargain to illegally lobbying for Turkey while advising Trump, also has Saudi ties. He acted as a paid consultant for a US firm that attempted to arrange the transfer of sensitive nuclear technology to Saudi Arabia while it also sought a $120 investment million from MBS, according to a House Oversight Committee report released last week. The report also found that Tom Barrack, a real estate investor and Trump confidant who headed the president’s inaugural committee, lobbied the administration to transfer the technology while also planning to partner with the Saudis to buy a company that would benefit from the policy. (A spokesperson for Barrack said he cooperated with the committee and did nothing wrong.) Prosecutors in the Eastern District of New York are investigating whether Barrack broke the law by working to influence US policy on behalf of Saudi Arabia and the UAE, the Times reported late last month. According to the report, since Trump’s inauguration, Barrack’s investment firm received about $1.5 billion from the two countries, including $474 million from Saudi and Emirati sovereign wealth funds.

Representatives for Prince, Kushner, Flynn, and Broidy did not respond when asked if they had received inquiries from the Intelligence Committee. A spokesperson for Barrack declined to comment.

Trump himself has acknowledged a major conflict of interest in the Gulf. “Saudi Arabia, I get along with all of them,” Trump said at an August 2015 campaign event in Mobile, Alabama. “They buy apartments from me. They spend $40 million, $50 million. Am I supposed to dislike them? I like them very much.” Indeed, at the same time, Trump was registering new corporations to manage a prospective hotel in Jeddah, Saudi Arabia. Two were created on the day Trump spoke in Mobile. While that project hasn’t panned out, Trump’s business holdings mean he still benefits from Saudi largesse as president. According to the Washington Post, two Trump hotels, in New York and Chicago, received significant boosts in revenue in recent years as a direct result of business from top Saudi officials. In other words, there’s no shortage of angles for Schiff’s committee to investigate.