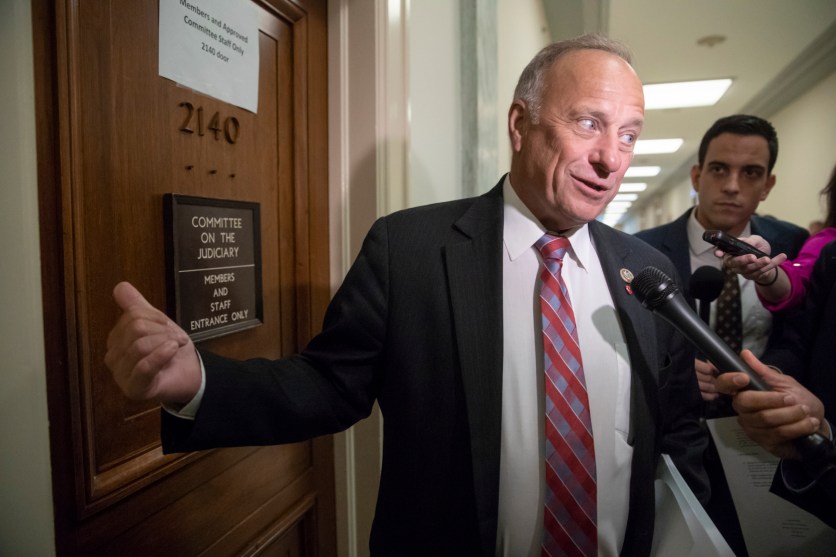 Earlier this month, a mass shooter killed 22 and injured 24 others at a Walmart in El Paso, Texas, specifically targeting Latino immigrants; the shooter had a manifesto, in which he mentioned multiple times the “great replacement,” a racist theory—popular among white supremacists—that white people will be replaced by people of color. “This attack is a response to the Hispanic invasion of Texas,” the shooter wrote.

As the Paris-based writer Thomas Chatterton Williams explained to the New York Times, the theory found a voice in French writer Renaud Camus, who took “a familiar concept and rebrand[ed] it in a catchy way” in his 2012 book Le Grand Remplacement. Camus argued that it was not racist to be concerned about replacement; it was simply a concern of preservation. The theory allows self-described identitarians to “cynically proclaim their ‘whiteness’ as just another form of diversity that is in danger of erasure,” Chatterton Williams said. Such replacement begins, of course, with an invasion.

A fear of an “invasion” of people of color has also been a longtime Republican talking point that has gained prominence during the Trump administration. The New York Times analyzed right-wing media—including Fox New shows like Tucker Carlson Tonight—and found “hundreds of examples of language, ideas, and ideologies that overlapped with the mass killer’s written statement.” President Trump and officials in his administration have used it, and Republican members of Congress have used similar racist language. Below are some examples we found.

The New York Times reported that Trump’s campaign has posted 2,000-plus ads on Facebook using the term “invasion” since January. Trump famously used the term to describe a migrant caravan during a rally in Tennessee, and according to a USA Today analysis, he has said “invasion” at least 19 times across 64 rallies since 2017. It came up recently in a Rose Garden speech, too. “We’re talking about an invasion of our country with drugs, with human traffickers, with all types of criminals and gangs,” he said while declaring a national emergency at the border.

“We’re talking about an invasion of our country with drugs, with human traffickers, with all types of criminals and gangs.” pic.twitter.com/Wv4spvjrRx

The member of Congress who is the most open about his replacement theory ideology is Steve King. “White nationalist, white supremacist, Western civilization—how did that language become offensive?” King asked the New York Times in January. “Why did I sit in classes teaching me about the merits of our history and our civilization?”

King has a long track record of such comments, including the time he retweeted a Nazi sympathizer’s concerns about mass migration and praised Hungarian far right-wing leader Viktor Orbán’s condemnation of “mixing cultures,” saying, “Diversity is not our strength.” In 2017, he tweeted: “We can’t restore our civilization with somebody else’s babies.” The following year, he spoke with an Austrian right-wing organization about “replacement theory,” which the El Paso shooter also referenced in his manifesto. “If we continue to abort our babies and import a replacement for them in the form of young violent men, we are supplanting our culture, our civilization,” King said.

King’s condemnation of the “other” is not limited to immigrants on the Southern border. In 2015, King warned of the “the #Muslim Invasion of Europe” and “invasion by migration & rejection of assimilation & host culture” in separate tweets.

This sort of rhetoric recurs in Congress. Rep. Louie Gohmert compared migrants at the border to the D-Day invasion on the Senate Floor in June. “They didn’t all come to shore with weapons, but it is an invasion when that many people are trying successfully to come into your country,” Gohmert said, according to the Daily Beast.

He also used the term “invasion” on Twitter multiple times.

Securing the border is the most pressing issue facing Congress. If you don’t have secure borders, you don’t have a country. Right now, there is a brazen invasion occurring at our border https://t.co/wMBiKhua0s via @cnsnews

"You cannot manage it [#MigrantCaravan]. All of these people trying to force their way in – it’s called an invasion. Thank God we have a president who will stand up to an invasion like this.” VIDEO: https://t.co/Jky9hsGl0A

Rep. Jeff Duncan’s comments are similar to those made by Gohmert. BuzzFeed News reported in 2014 that Duncan wrote in a Facebook post: “150,000 Allied troops invaded the beaches at Normandy. 300,000 unaccompanied minors have invaded our southern border states.” He doubled down on Twitter after backlash to his remarks.

.@SeanKelly1926 it's an invasion and a humanitarian crisis.

Rep. Paul Gosar (R-Ariz.)—who often says strange things on Twitter—has used the term “invasion” on both his personal and professional accounts. “The ‘caravan,'” he wrote in 2018, “is just the most visible example of Hondurans, Guatemalans, and El Salvadorans trying in record numbers to illegally enter the U.S., waving Honduran and Guatemalan flags, while they claim a ‘right’ to invade our country.”

As the number of migrants grows by the THOUSANDS it's becoming even more imperative that we secure our border at ALL cost. Since open border democrats refuse to work with Republicans to #buildthewall, it's up to our military to protect our border from the most recent invasion.

The level of organization, logistics and coordination being depicted in reports of the most recent caravan raises serious concerns. I sent a letter to the DOJ asking for an investigation to determine the actors responsible for this invasion. https://t.co/f4PCUZmBsc

The invasion force grows. Yuma isn’t the only sector under a state of emergency. https://t.co/32jco9FU1L

Rep. Mo Brooks applauded Trump’s use of the military to “secure the border against invasion by foreign nationals.”

I fully support @realDonaldTrump's use of our military to secure the border against invasion by foreign nationals. For too long, illegal aliens have exploited weak laws to gain de facto permanent legal status at great cost and damage to American taxpayers. https://t.co/AIagboWK11

Rep. Andy Biggs said Americans “must awaken” to “stop the invasion across our southern border.”

Americans must awaken to the reality of this emergency at our border & demand that their federal legislators act. But until then, we are relying on DHS & HHS to act to stop the invasion across our southern border.

Rep. Walter Jones, who passed away this year, tweeted about a “dangerous invasion of illegal immigrants” in 2018.

(1/2) I support the president’s decision to work with border state governors to deploy troops to the Mexican border and protect our country against the dangerous invasion of illegal immigrants.

Rep. Duncan Hunter—who was indicted in 2018 for using campaign funds for “personal activities,” including Uber rides, booze, and extravagant vacations—released an ad last year that claimed his Muslim opponent, Ammar Campa-Najjar, was supported by the Muslim Brotherhood and was attempting to “infiltrate” Congress.

In June, Rep. John Rose warned of an “‘invasion’ at the southern border.”

Rep. Ron Wright would likely be annoyed with this list because he groused in March that criticizing the use of “invasion” is just “political correctness.”

The time for political correctness is over! Liberals like to criticize language like “invasion”. They call it inflammatory. When you have 11K illegal immigrants a week coming across the border from countries around the world, that is an invasion! #SecureOurBorder #BorderSecurity

Former Attorney General Jeff Sessions and current Secretary of State Mike Pompeo have ties to Frank Gaffney, an anti-Muslim activist who, according to the Southern Poverty Law Center, has “paranoid fantasies about Muslims destroying the West from within.” Sessions was awarded the “Keeper of the Flame” by a think-tank founded by Gaffney that promotes anti-Muslim conspiracy theories, and after Sessions was confirmed as AG, Gaffney tweeted, “#Godspeed.” Pompeo, who was formerly the CIA director, has frequently appeared on Gaffney’s radio show—in one episode, Gaffney asked Pompeo about a Muslim Congress member’s “deep personal ties to Muslim Brotherhood operatives.” Pompeo dodged, but he let the implication linger. “There are organizations and networks here in the United States tied to radical Islam in deep and fundamental ways,” he said.

Former Trump national security adviser Michael Flynn often touted similar ideology warning of Sharia and tweeted that “fear of Muslims is rational” in 2016. In his book The Field of Fight, he argues for a “Judeo-Christian ideology” and calls to “fight those who want to impose Sharia law and their Radical Islamist views.”

Birtherism, the racist conspiracy theory that President Barack Obama was born in Kenya, also had offshoots that claimed Obama was a secret Muslim agent in the takeover of America. Monica Crowley, Trump’s new pick for a position in the Treasury, spread such fears, according to CNN, writing in 2010, “Can he be both loyal to Islam and loyal to the United States?”