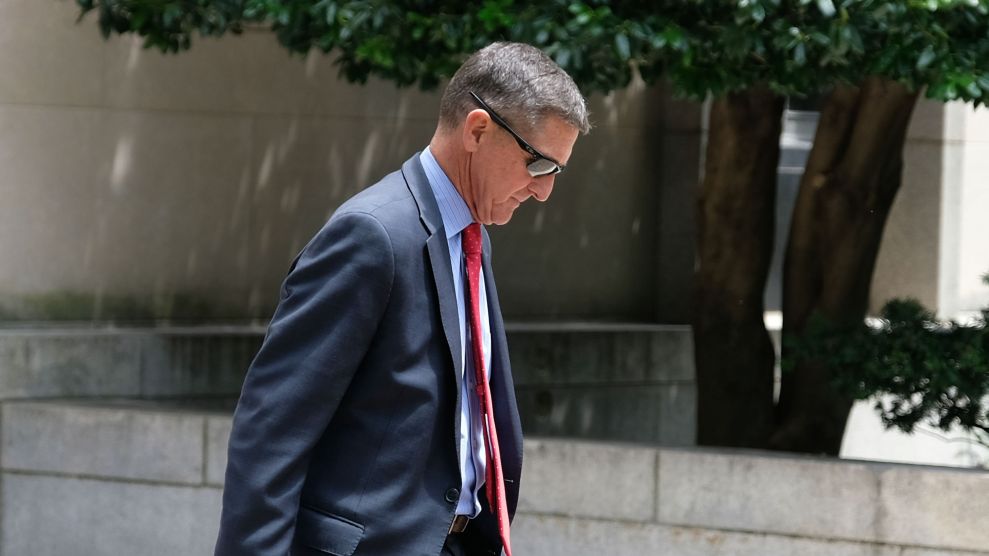 Former White House national security adviser Michael Flynn is slowly breaking up with the federal prosecutors he agreed to assist nearly two years ago, risking a stiffer prison sentence in what might be an effort to win a pardon from President Donald Trump.

On Friday, Flynn’s lawyers and prosecutors said in a joint status report that they cannot agree on when Flynn, who has completed his cooperation, should be sentenced. The impasse resulted from demands by Flynn’s recently hired lawyer, Sidney Powell, for a security clearance and for information that she claims prosecutors are withholding. A right-wing pundit fond of criticizing deep-state plots against Trump, Powell has flirted with conspiracy theories, while hinting that the government is hiding prosecutorial misconduct leading up to Flynn’s November 2017 guilty plea on charges that he lied to FBI agents about contacts with Russia’s ambassador. “There is other information relevant to the defense that is either classified or being suppressed by the government, not the least of which are transcripts and recordings of phone calls that supposedly underpin the charges against Mr. Flynn,” she wrote in Friday’s filing.

But prosecutors in the office of the US attorney for the District of Columbia, who took over the case from special counsel Robert Mueller, said they have already “exceeded” their discovery obligations and asserted that Powell doesn’t need any classified information. They noted that defendants by law can only obtain classified material if it “relevant” and “helpful to the defense.” No such material exists, they stated.

The dispute marks a major shift from last December, when Mueller’s office praised Flynn’s cooperation and recommended that Flynn avoid serving any prison time. While prosecutors have not officially altered that recommendation, the decision on whether to jail Flynn, and when to sentence him, falls to US District Court Judge Emmet Sullivan—and Flynn’s fallout with prosecutors seems likely to hurt his cause with Sullivan. In a December hearing, Sullivan appeared to surprise prosecutors and Flynn’s former attorneys by excoriating the former general and indicating unease with prosecutors’ request for leniency. Sullivan even asked if prosecutors had considered charging Flynn with treason. The judge’s reaction led both sides in the case to seek a delay in sentencing, giving Flynn time to strengthen his case for how he has helped the government, in part through his testimony in ongoing cases.

That exercise doesn’t seem to have gone well for Flynn. His case has long been hobbyhorse for pro-Trump pundits, who argue he was unfairly targeted by Mueller—despite Flynn’s public admission that he lied to the FBI about multiple matters. Flynn’s former lead lawyer, respected defense attorney Robert Kelner of Convington & Burling, seemed to ignore Flynn’s status as a conservative cause célèbre. But in June, Flynn replaced Kelner with Powell, a frequent Fox News guest who sells anti-Mueller tee-shirts on her website. Powell quickly began suggesting that Flynn had been railroaded.

“Counsel has identified crucial and troubling issues that should concern any court,” she said in a July 11 filing, without elaborating. Powell also walked back Flynn’s admission, made as part of his guilty plea, that he had lied in Foreign Agents Registration Act filings submitted to the Justice Department regarding work his company, the Flynn Intel Group, did for the Turkish government. Through Powell, Flynn claimed he had not lied in his FARA filings, which were submitted by his then-lawyers, because he never read them. That reversal led prosecutors to drop plans to call Flynn as a star witness in the trial of his former lobbying partner, Bijan Rafiekian; that, in turn, led the judge in the case to throw out one of charges against Rafiekian. (Rafiekian was nevertheless convicted of illegally lobbying for Turkey.)

Earlier this month, Mother Jones reported that Flynn agreed to speak at a fundraiser and conference organized by a proponent of the bizarre QAnon conspiracy theory, which holds that Trump is secretly battling a ring of pedophiles that includes high-ranking Democrats. The organizer said he had worked closely with Powell to set up the event, which would have benefitted Flynn’s legal defense fund. Flynn subsequently pulled out of the event, and it was cancelled last week.

Flynn’s hiring of Powell and his conduct since has fueled speculation that, despite the risk of incurring a harsher sentence from Sullivan, he is angling for a pardon by ingratiating himself with Trump partisans and conspiracy theorists who see the entire Mueller probe as a deep-state plot.

In a November 22, 2017, voicemail for Kelner released in June, Trump’s former lawyer, John Dowd, seemed to dangle the prospect of a pardon for Flynn. Dowd left the message after realizing Flynn had decided to plead guilty and cooperate with Mueller. The message is somewhat cryptic, but Dowd seemed to imply that if Flynn were to cooperate without implicating Trump in wrongdoing, he should know Trump still liked him. “Remember what we’ve always said about the president and his feelings towards Flynn, and that still remains,” Dowd said.

Twenty-two months later, Flynn has changed lawyers and broken with prosecutors But if Dowd was subtly offering a path to a pardon, Flynn has stayed on it.