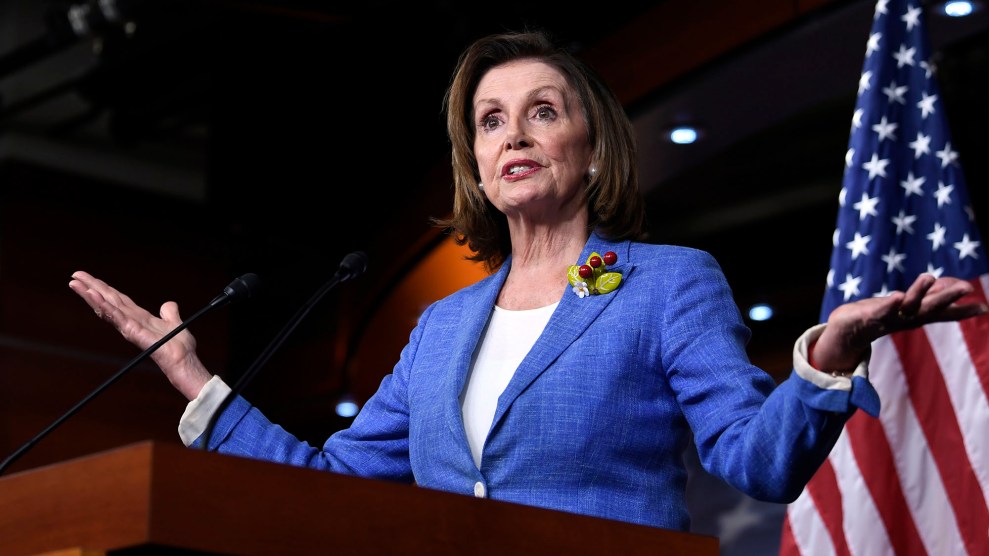 House Speaker Nancy Pelosi (D-Calif.) had a simple message for gun control advocates when she addressed them Monday evening. “The focus now has to be on Mitch McConnell,” she said. “Bring the Senate back.”

“We can’t have any confusion in the public’s mind.”

After a weekend of deadly mass shootings, Pelosi was referring to renewed efforts to pass legislation that would require a background check for every gun sale. The Democratic-controlled House passed a background check bill—along with two other bills that would close loopholes in existing laws surrounding gun sales—earlier this year. But McConnell, the Kentucky Republican at the helm of the Senate, has refused to bring any of those measures up for a vote. Both houses of Congress are currently on recess until the middle of September, prompting calls for lawmakers to return to Washington, DC, to work on the issue. And so Pelosi is hoping to focus national attention on which party has already worked to reform the nation’s gun laws, and which hasn’t.

Pelosi’s comments came during a conference call that the House Speaker held with representatives from gun violence prevention groups such as March for Our Lives, Giffords, and Brady United, as well as with Latino civic engagement groups such as Mi Familia Vota and the Latino Victory Project. The conversation had originally been organized following an earlier mass shooting at a festival in Gilroy, Calif., that left three dead. Details of the conference call were provided to Mother Jones by a participant.

Pelosi called on the activists to use public outrage over Republican inaction to pressure McConnell to hold a vote on the House legislation. “It’s not done until they pass the [universal background checks] bill,” Pelosi said. “We can’t have any confusion in the public’s mind.”

It was a reiteration of what Pelosi had outlined in a letter to her House colleagues about her chamber’s next steps. She said that, starting next week, the House Homeland Security Committee would hold hearings on white supremacy and domestic terrorism. Over the next several weeks, House Democrats would use pro forma sessions, tele-town halls, and district events to help put pressure on the Senate. The message they are hoping to send to the upper chamber’s Republican’s is simple: Return from August recess to pass gun reform laws. If the Senate acts, Pelosi noted, the House will reconvene, as well. “The House stands ready to return to pass legislation, if the Senate sends us back an amended bipartisan bill or if other legislation is ready for House action,” she wrote.

But not all House Democrats agree that Pelosi’s strategy is the right one. On a conference call with members earlier that day, a number of Democratic lawmakers pressed the speaker to cancel August recess and bring her caucus back to vote on a number of other gun reform proposals, including bills that would ban high-capacity magazines and assault weapons, as well as “red flag” legislation that would enable law enforcement to take guns away from those who pose a risk to themselves or others. All three of these measures could theoretically have helped prevent this weekend’s mass shootings, which involved military-style weapons and large magazines that allowed the shooters to kill and wound so many people in brief periods of time.

Reps. Pramila Jayapal (D-Wash.) and Mark Pocan (D-Wis.), the co-chairs of the Congressional Progressive Caucus, issued a statement calling for Congress to “immediately consider” Rep. David Cicilline’s (D-R.I.) assault weapons ban legislation, which has 191 Democratic cosponsors. Cicilline himself called for House members to return to Washington to consider the bill.

But Robin Lloyd, the managing director of Giffords, warned against the temptation to focus political attention on specialized bills related to high-profile massacres at the expense of broader measures—such as background checks—that many experts say would curb the more commonplace shootings that are responsible for the vast majority of gun deaths.

“We have everyday gun violence in this country,” Lloyd said. “We need to take action on really strong policies the House already passed that address that reality.”