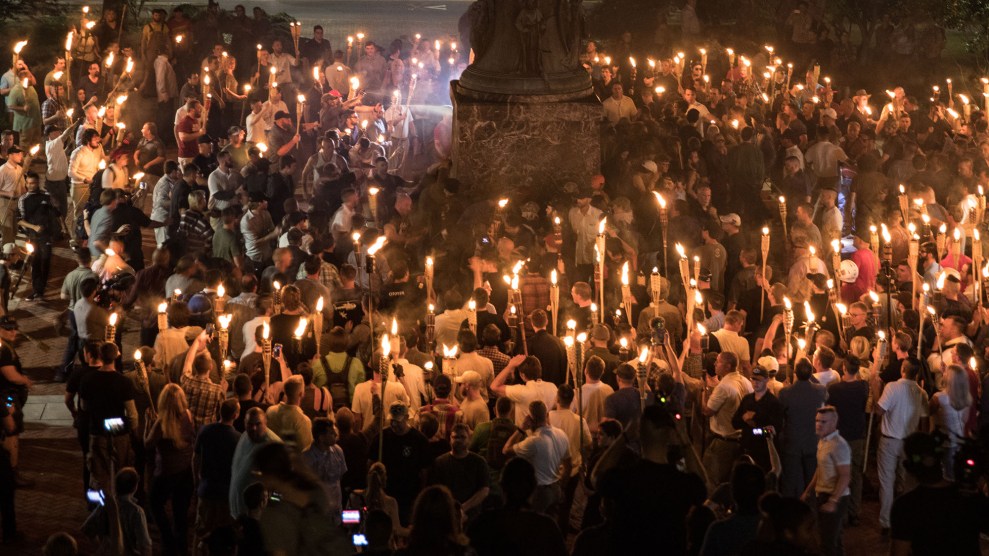 Republicans used an April congressional hearing on white extremism to defend President Donald Trump's claim that there were "very fine people on both sides" of the Charlottesville "Unite the Right" rally.Evelyn Hockstein/The Washington Post via Getty

Hours after a racist, anti-immigrant fanatic carried out a gruesome massacre in El Paso, Texas Land Commissioner George P. Bush—the nephew of the 43rd president—called for action against white extremism. “There have now been multiple attacks from self-declared white terrorists here in the US in the last several months,” Bush, a Republican, tweeted Saturday. “This is a real and present threat that we must all denounce and defeat.”

Rather than look for solutions to the epidemic of far-right violence, Republicans decided to use the hearing to score partisan political points.

Bush’s words were particularly striking because many other members of his party seem reluctant to acknowledge the urgency of the problem. “I am concerned about the rise of any group of hate, I don’t like it,” President Donald Trump told reporters last week, in what seemed like an effort to downplay the particular danger posed by white supremacists in recent years. “Any group of hate, whether it’s white supremacy, whether it’s any other kind of supremacy, whether it’s antifa…I am very concerned about it, and I’ll do something about it.”

To understand just how unwilling Republican officials have been to grapple with the white extremism crisis, it’s worth taking a look back at their behavior earlier this year when Congress attempted to investigate the issue. In April, not long after white supremacists murdered Muslim worshippers in New Zealand and Jewish congregants in a Pittsburgh synagogue, Democrats on the House Judiciary Committee convened a hearing on “hate crimes and the rise of white nationalism.” The Democrats invited experts on civil rights and extremism, as well as representatives of Google and Facebook, whose platforms have frequently been exploited by white supremacists. But rather than look for solutions to the epidemic of far-right violence, Republicans decided to use the hearing to attack a Muslim lawmaker, praise Trump, and score partisan political points on issues ranging from Israel to abortion.

After an obligatory denunciation of white nationalism, Rep. Doug Collins (Ga.), the top Republican on the committee, speculated that the “true motivation for this hearing is to suggest that Republicans are hateful and dishonest.” He then moved on to one of the central GOP talking points for the day—one that had nothing to do with combating white nationalism or domestic terrorism. Collins lamented a supposed “tolerance for Jewish stereotypes” among House members, a reference to Rep. Ilhan Omar, a Minnesota Democrat and former refugee from Somalia, who is one of the first two Muslim women ever to serve in Congress. Omar had sparked controversy with a series of remarks critical of Israel and its political supporters that some argued contained anti-Semitic tropes. Omar apologized and voted in favor of a resulting resolution condemning anti-Semitism and anti-Muslim bigotry. But she quickly became one of the most visible targets of right-wing racism, with Trump attempting to link her to Islamic terrorism and his supporters chanting, “Send her back.”

One of the witnesses invited by Republicans to the April hearing, Morton Klein of the right-wing Zionist Organization of America, seemed largely interested in decrying Omar and other critics of Israel. After declaring that “Muslim anti-Semitism” is “the major issue threatening violence against Jews and all Americans,” he told the committee that he was “horrified” to see Democratic leaders defend Omar “after her vicious anti-Semitic remarks.” He called for Omar to lose her committee assignments, and he complained about anti-Israel activists on college campuses.

At one point, Rep. Steve Chabot, an Ohio Republican, asked Klein to respond to former Rep. Beto O’Rourke, the Democratic presidential candidate, who had just called Israeli Prime Minister Benjamin Netanyahu “racist” at a campaign event. Klein responded that O’Rourke’s comment was “outrageous and despicable, and I think it should almost disqualify him for higher office.” (As O’Rourke pointed out, during a 2015 election, Netanyahu attempted to motivate his supporters by warning that “Arab voters are coming out in droves to the polls,” and in February, Netanyahu forged an alliance with an extremist anti-Arab political party that has been denounced by pro-Israel groups across the political spectrum.)

Then there was Louie Gohmert, a right-wing Texas Republican who asked Klein to defend Trump’s infamous statement that there were “very fine people on both sides” on both sides of a 2017 white supremacist rally in Charlottesville at which people carrying torches chanted, “Jews will not replace us.” Klein was apparently ready for that and launched into an elaborate—but deeply misleading—defense the president’s words.

Defending Trump was also a top priority for the other GOP witness, right-wing commentator Candace Owens. Owens, who is black, noted at the start of the hearing that she had been the victim of a hate crime while in high school, and she spoke about the very real problem of hate speech and harassment targeting black conservatives. But during the hearing, she minimized the threat posed by white extremism. She cited failing schools and high rates of single-motherhood and abortion in African American communities and declared that “white nationalism did not do any of those things that I just brought up. Democrat policies did.” She added that “the hearing today is not about white nationalism or hate crimes. It is about fear mongering, power, and control.”

Chabot took the opportunity to ask Owens about her “Blexit” movement, which Owens described as “the black exit from the Democrat Party.” Rep. Ken Buck (R-Colo.) lauded Owens for causing Democrats “to go to their safe spaces.” He offered to take Owens shooting and asked her asked her to expand on her claims that Trump had “done a tremendous job in helping the black community” economically. Owens went on to accuse Rep. Alexandria Ocasio-Cortez (D-N.Y.) of “speaking to us like we’re slaves.”

Minutes later, committee Chairman Jerrold Nadler (D-N.Y.) paused the questioning to read aloud from a story the Washington Post had just published online. The article noted that while the hearing was airing live on YouTube, commenters on the site were posting a slew of anti-Semitic and racist vitriol:

Alongside the stream, a live chat featured posts from users, some of whom published anti-Semitic screeds and argued that white nationalism is not a form of racism.

“These Jews want to destroy all white nations,” wrote the user Celtic Pride.

“Anti-hate is a code word for anti-white,” wrote another named Fight White Genocide.

“So this just illustrates part of the problem we’re dealing with,” Nadler said.

“Could that be a hate hoax?” Gohmert shot back.

It wasn’t. Neither was the shooting 18 days later, when a white supremacist who had previously set fire to a mosque opened fire in a California synagogue, killing one and inuring three.