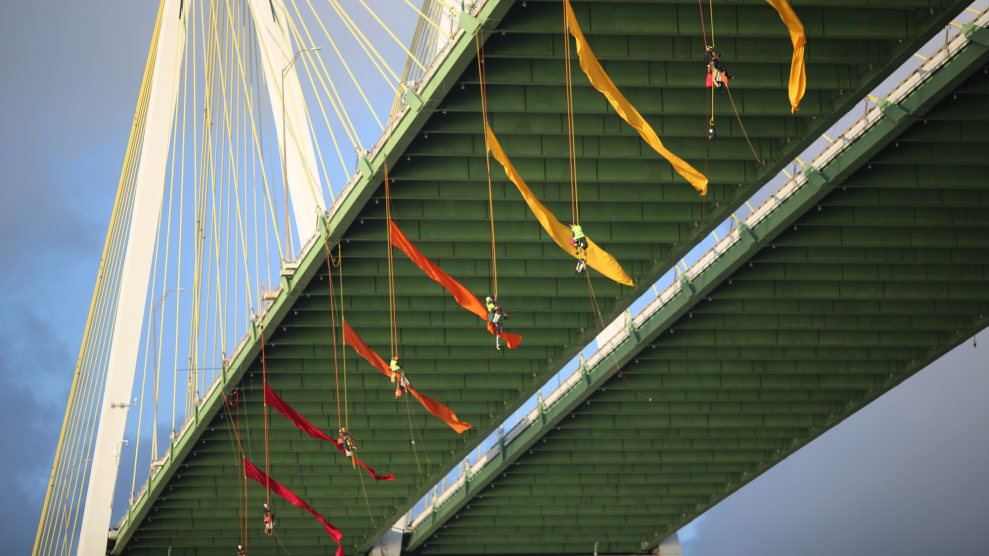 Greenpeace activists hang from a bridge to block oil traffic in Houston. The protesters were the first to be charged under Texas' new "critical infrastructure" law.Greenpeace

A judge on Wednesday issued a preliminary injunction to block enforcement of South Dakota’s new “riot-boosting” law, which passed earlier this year to deter pipeline protests. The law threatens heavy penalties for any person or group that encourages a “riot,” which is defined broadly enough to include many forms of public protest.

US District Judge Lawrence Piersol granted the injunction in response to a motion filed by the ACLU, which is representing four organizations and two Indigenous individuals in a suit alleging that the law is unconstitutional for its troubling vagueness and “chilling effect” on free speech. The Sierra Club, one of the organizations challenging the law, said that it would make the group “hesitant” to challenge the Keystone XL pipeline through protected forms of speech like rallies and online campaigns due to the risk of costly fines—up to three times the cost of any damages incurred by a related protest.

South Dakota Governor Kristi Noem drafted the law in consultation with police and TC Energy, the company behind Keystone XL. Construction of the pipeline, which would run through South Dakota, is slated to begin next year.

As I wrote in June, the South Dakota law is part of a wave of anti-protest measures that have recently been passed in more than a dozen US states:

Many of these laws specifically target protests against pipelines and “critical infrastructure” projects, with sentences of up to 10 years in prison for individuals, and fines of up to $1 million for “conspiring” organizations.

North Dakota has expanded the scope of both its riot and trespass laws, and along with Arizona has created new penalties for protesters who conceal their faces. Louisiana’s critical infrastructure law, which passed last year, is currently being used to charge Anne White Hat, a Sicangu Lakota single mother, with two felonies and up to 10 years in prison for allegedly trespassing on a pipeline easement. White Hat is the lead plaintiff in a different federal court case challenging the constitutionality of the Louisiana law.

In early June, the Department of Transportation released a proposal calling for Congress to expand criminal penalties for pipeline tampering to apply to projects still under construction, with a sentence of up to 20 years in prison. Like many of the state laws, the DOT’s proposal is similar to model legislation put forth in 2017 by the American Legislative Exchange Council (ALEC).

Last week, a group of Greenpeace activists became the first people charged under a similar law in Texas, enacted in June, which makes it a felony to obstruct “critical infrastructure” such as oil and gas facilities. Thirty-one activists were arrested last Thursday after 11 of them dangled from a bridge to block boat traffic through the Houston Shipping Channel, the country’s largest oil export route.

In addition to the nine states that have already passed such a law, statutes criminalizing oil and gas protests specifically are currently pending in Illinois, Missouri, Ohio, and Wisconsin. As Teen Vogue recently reported, Texas and Georgia recently passed laws that create new penalties for protesters on college campuses. Four other states are considering similar measures.

In his statement granting the preliminary injunction against South Dakota’s law, Piersol suggested that Martin Luther King and the Southern Christian Leadership Conference “could have been liable” had a “riot-boosting” law existed during their protests in Birmingham, Alabama.