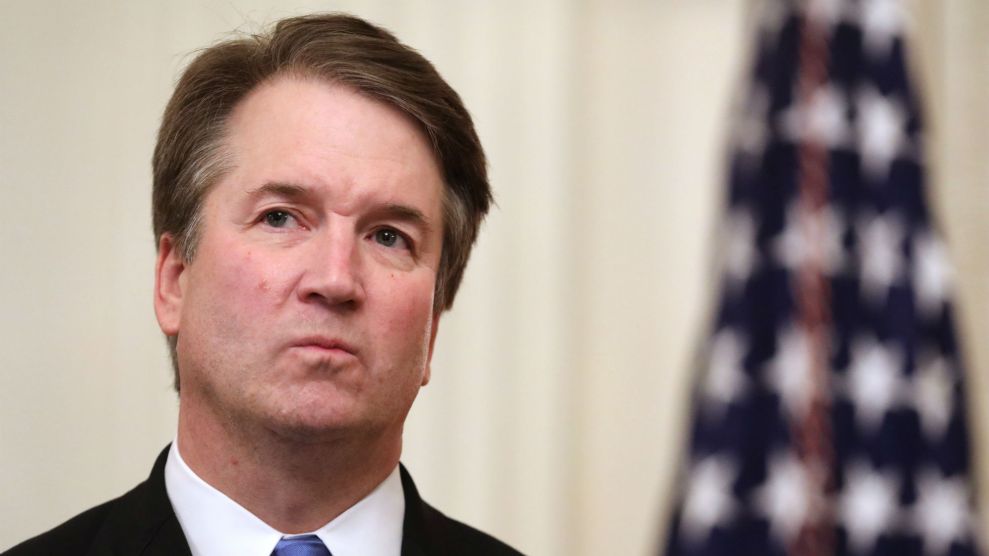 On two separate occasions, Supreme Court Justice Brett Kavanaugh exposed himself to classmates at Yale University in the 1980s, according to new reporting from New York Times reporters Robin Pogrebin and Kate Kelly.

The two published details of the incidents, one of which involved Deborah Ramirez, whose allegations were not fully investigated during Kavanaugh’s confirmation hearings in 2018, in their new book, The Education of Brett Kavanaugh: An Investigation. The Times published an excerpt of the book on Saturday. In it, they say have found seven sources who were familiar with Ramirez’s allegations that Kavanaugh “pulled down his pants and thrust his penis at her” at a party. They also detail a previously unreported story that Kavanaugh attended another party “where friends pushed his penis into the hand of a female student.”

Last year the Kavanaugh nomination was rammed through the Senate without a thorough examination of the allegations against him. Confirmation is not exoneration, and these newest revelations are disturbing. Like the man who appointed him, Kavanaugh should be impeached.

I sat through those hearings. Brett Kavanaugh lied to the U.S. Senate and most importantly to the American people. He was put on the Court through a sham process and his place on the Court is an insult to the pursuit of truth and justice.

He must be impeached.

Yesterday, we learned of another accusation against Brett Kavanaugh—one we didn't find out about before he was confirmed because the Senate forced the F.B.I. to rush its investigation to save his nomination. We know he lied under oath. He should be impeached.

It’s more clear than ever that Brett Kavanaugh lied under oath. He should be impeached.

And Congress should review the failure of the Department of Justice to properly investigate the matter. https://t.co/Yg1eh0CkNl

Sen. Bernie Sanders (I-Vt.) said Brett Kavanaugh “should never have been nominated,” and that he supports “any appropriate constitutional mechanism to hold him accountable.”

The revelations today confirm what we already knew: During his hearing, Kavanaugh faced credible accusations and likely lied to Congress. I support any appropriate constitutional mechanism to hold him accountable.

Sen. Amy Klobuchar (D-Minn.), told ABC’s “This Week” that the FBI investigation into Kavanaugh was a “sham.”

Sen. Amy Klobuchar on Justice Brett Kavanaugh: "My concern here is that the process was a sham. I don't think you can look at impeachment hearings without getting the documents … and the attorney general is shielding documents" https://t.co/gxl9RihwwF pic.twitter.com/0QOM4kIuSv

Former Vice President Joe Biden has not commented on the new report. President Donald Trump and Sen. Ted Cruz (R-Texas) rushed to Kavanaugh’s defense, with Trump suggesting the Department of Justice should get involved in a possible libel suit. (Needless to say, that’s not how libel law works.)

Brett Kavanaugh should start suing people for libel, or the Justice Department should come to his rescue. The lies being told about him are unbelievable. False Accusations without recrimination. When does it stop? They are trying to influence his opinions. Can’t let that happen!

Now the Radical Left Democrats and their Partner, the LameStream Media, are after Brett Kavanaugh again, talking loudly of their favorite word, impeachment. He is an innocent man who has been treated HORRIBLY. Such lies about him. They want to scare him into turning Liberal!

Sen. Ted Cruz: "I bet you the next Democratic debate they'll all be saying impeach Kavanaugh, impeach Trump. There's nobody they don't want to impeach … they just have to let the anger go and recognize that the Democratic process actually moves on" https://t.co/gxl9RihwwF pic.twitter.com/qpFST4vQgL

As the hashtags #KavanaughLied, #ImpeachKavanaugh, and #KavanaughResign trended on Twitter, others weighed in on the possibility that Kavanaugh perjured himself and the implications of his lifetime appointment.

When you see women defending Brett Kavanaugh this morning it’s a good reminder that this isn’t a gender war, it’s a war between those who believe we should raise men and boys better, and those who don’t.

Kavanaugh pretty clearly lied under oath. The confirmation process was corrupted beyond recognition. Impeachment is the right process to investigate all of these matters. https://t.co/f7h09Fl2nD

The Kavanaugh confirmation was the largest collective gas lighting of women in history. Women knew it at the time. It doesn't really help that history proves us right but here you go. https://t.co/jdOZb7wfSo

When people demanded an investigation last year, they wanted an actual investigation, before a confirmation vote. They got a barely phoned-in sham. Now there’s been investigation, turning up corroboration and more, & he has a lifetime appointment. https://t.co/d28p23aaEi

Not only should the Supreme Court have higher standards for the character of its justices, at least going forward, but Brett Kavanaugh lied under oath during his confirmation hearing. He should be impeached immediately. Failing to do so would be a dereliction of duty.

This is not democracy

Just a reminder that Susan Collins put Kavanaugh over the top.