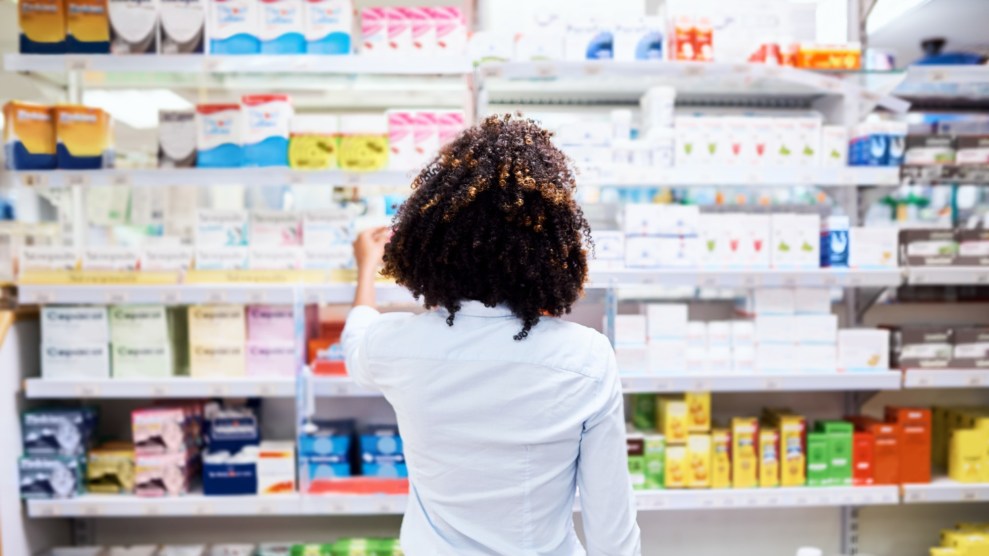 “You need a prescription for this,” the pharmacist at CVS tells me when I appear at her counter with a box of Plan B One-Step. Even though the product is displayed on an open shelf next to pregnancy tests and packages of condoms, it’s packaged in a plastic container requiring store assistance to remove. I ask why the emergency contraception is held in this kind of a case, and her response about the necessity of a prescription is emphatic.

I smile, thank her, and put it back on the shelf. But if Plan B were a prescription medication, it would not be so physically accessible. Since 2013, what once was known as the “morning-after pill”—contraception to be taken within 72 hours after unprotected sex to avoid pregnancy—has been an over-the-counter medication free of restrictions, much like aspirin or Tums.

She was the sixth pharmacist with whom I spoke about purchasing emergency contraception in my quest to learn firsthand what obstacles exist in accessing a health care product that should be readily available. I walked 10 miles and visited 13 stores in Washington, DC; Maryland; and Virginia in an unscientific attempt to see how easy it would be to obtain this emergency contraception. What I discovered reflected what the research has shown: Access, even in an area as relatively liberal as the Washington metropolitan region, is neither uniform nor predictable, because each store has very different policies on where and if they choose to sell emergency contraception.

The FDA first approved Plan B in 1999, and a follow-up product, Plan B One-Step, in 2009. But in 2005 the Center for Reproductive Rights sued the Food and Drug Administration for failing to grant over-the-counter status to Plan B “against the advice of scientific experts,” and won. More than a decade would pass from when the FDA first approved Plan B, and generic versions of the levonorgestrel emergency contraception would be approved for unrestricted over-the-counter use.

“It’s been 5 years and you should be able to walk into a pharmacy, take this product off the shelf, and not have to answer any questions,” says Kelly Cleland, a researcher at Princeton and a coordinator for the American Society for Emergency Contraception. “That is not what is happening.”

“It’s been 5 years and you should be able to walk into a pharmacy, take this product off the shelf, and not have to answer any questions. That is not what is happening.”

It wasn’t just Republican administrations that fought against expanding access for emergency contraception. The Obama administration overruled FDA Commissioner Margaret “Peggy” Hamburg’s recommendation that Plan B be approved for all who need it. They were concerned that the medication could be abused by young girls. However, Susan Wood who served as Assistant Commissioner for Women’s Health at the FDA from 2000-2005 before resigning in protest over the Bush administration’s decision to delay Plan B from going over-the-counter, explains that for both administrations, the reasons for preventing the product from being an over-the-counter medication weren’t grounded in the science.

“No matter what anyone tells you there’s absolutely no valid reason it should not have been approved within six months of the first application,” says Wood. “It is the FDA’s job to make sure that medicine is safe, effective, and appropriate. All of those other social issues about why a 13-year-old is pregnant are serious and important should be dealt with in a lot of different ways. But denying that person a medicine that can help prevent unintended pregnancy is not the thing to do.”

A 2018 report by the American Society for Emergency Contraception (ASEC) found that despite Plan B One-Step being an over-the-counter product, only 60 percent of stores across the country actually stock any form of emergency contraception on open shelves. Of these, 57 percent lock the product in a case or box that requires the assistance of a store employee. Of all the stores surveyed, only 3 percent make accessing emergency contraception a simple process. When trying to determine the reason for the lack of uniformity in access, ASEC found two major factors: its relatively high price—typically $40–$50—and personal decisions by store employees about this particular product’s availability.

For years, conservatives on the religious right have argued incorrectly that Plan B and similar emergency contraception cause abortions. Some of this stems from confusion between Plan B and abortifacient drugs such as Misoprostol, a prescription medication that, combined with a secondary drug, can act as an abortion pill. But Plan B falls under the category of a contraceptive rather than an abortifacient because Plan B prevents pregnancy before implantation of a fertilized egg.

No scientific evidence exists to support the claim that Plan B can cause abortions or is even effective after fertilization, but that hasn’t stopped widespread disinformation even among health care providers and been the subject of countless legal and legislative battles over emergency contraception. Currently, nine states still restrict access to emergency contraception. At least six of them—Arizona, Arkansas, Georgia, Idaho, Mississippi, and South Dakota—permit pharmacists to refuse to dispense emergency contraception. Despite FDA approval for these medications, people living in those states are legally able to be denied access to health care, in states where any delay could mean the difference between becoming pregnant or preventing an unwanted pregnancy.

Of the 13 stores I visited, three kept emergency contraception on the shelf without a lock, and four stores that openly sold products ranging from expensive DNA paternity tests to even more expensive male “performance enhancement” drugs didn’t sell them at all. Five stores kept them behind the counter, but only one actually had a sign informing customers of the location. It would be easy to assume, as I did before talking first to the pharmacist and then the store clerk, that they were simply out of stock.

The stores that do not make Plan B accessible on the shelf often refer to its price. On average, the pill costs $49.99 while most of its generic versions can run around $39.99. But Cleland notes that you can find easily accessible items of equal or greater value on open shelves in most major drugstores. I was told at a CVS that the price was the reason emergency contraception were put behind the register, even though they run from $39 to $49. But I had no problem accessing a $35 pack of Magnum condoms, a $47 vibrator, and a $52 ovulation test at self-checkout. Cleland has had a similar experience.

“I think there’s more going on than the cost,” Cleland says. “Some providers will refuse to offer ECs because they think it’s the abortion pill. Either they don’t know that it’s not the abortion pill, or they know that it’s different but they still think that it somehow induces an abortion because of a misunderstanding of how emergency contraception works—and their unconventional definition of when pregnancy begins.”

While these precautions ostensibly exist to prevent theft, they can also create unnecessary delay and stigma during an incredibly time-sensitive and stressful experience, says Elizabeth Nash, senior state issues manager at the Guttmacher Institute, which researches reproductive health justice.

“Clearly there are ways to protect inventory and give people access to products that they need,” she says. “And we’re talking about something that needs to be taken within a fairly short window of time that is still somewhat stigmatized, and that means putting it on the shelf.”

CVS Pharmacy told Mother Jones that it’s not company policy to keep emergency contraception behind the register or behind the pharmacy counter, “consistent with FDA guidelines.” But CVS does use “protection boxes” as a “convenient alternative to locking the product in a display case or keeping it behind the counter,” as a means to “deter theft.”

The biggest barrier to access that experts cite is the cost of Plan B even in generic forms. At the high end, emergency contraception can cost $55 in retail stores, prohibitively expensive for many people. “There is no good reason for it being this expensive,” says Wood. “It is dirt cheap to produce.”

Family planning organizations like Planned Parenthood often offer emergency contraception like Plan B for free or at a reduced cost. The obstacles to accessing a clinic, such as proximity, appointment availability, and scheduling, can add time to a process in which every minute counts. “The timing is just incredibly important,” Cleland says, because any delay “could make the difference between preventing pregnancy and not preventing pregnancy.” Nash also points out that “oftentimes you may need this in the middle of the night when a family planning clinic is not open.”

Common misconceptions about emergency contraception also play a role in access limitations. Plan B lists two mechanisms for preventing pregnancy on its label: preventing or delaying ovulation, and preventing implantation. Preventing implantation of a fertilized egg is not an abortion, technically, but that hasn’t kept anti-abortion groups from routinely referring to it as such. The evidence that Plan B can actually prevent implantation “is not substantiated by evidence,” Cleland explains. “It’s on the label and it’s a holdover from many years ago, when contraceptive labels were first developed.” Preventing the implantation of a fertilized egg, she says, is not “the same thing as an abortion.”

Misinformation is not restricted to the science. It also includes age restrictions and requirements for identification. According to ASEC’s 2018 report, 30 percent of stores impose age restrictions on the purchase of these contraceptives, even though in 2014 Plan B was approved for all age groups without requiring identification. A valid ID could pose a barrier for all sorts of populations, especially people who are undocumented or young. “When you have to show your ID,  it makes you feel as if you’re being recorded or that this may appear on a registry of people who are buying this product,” says Cleland. “For young people who don’t want their parents to know, or for people who don’t want their partner to know, privacy is incredibly important.”

It was 6:30 p.m. when I finally visit my last CVS in Silver Spring, Maryland, and the process has become predictable. Initially friendly conversations with store clerks immediately turn awkward when I tell them what I’m looking for. Pharmacists give me confused stares that seem oddly judgmental. I find myself thinking that they’re reacting to the fact that I’m comfortable being a sexually active woman in my mid-20s. But I find that even just pretending I want to buy emergency contraception becomes an emotionally exhausting process. For thousands of women and young girls who find themselves facing a potential unintended pregnancy, this process may be their only option, and anything standing between them and one pill could make all the difference.