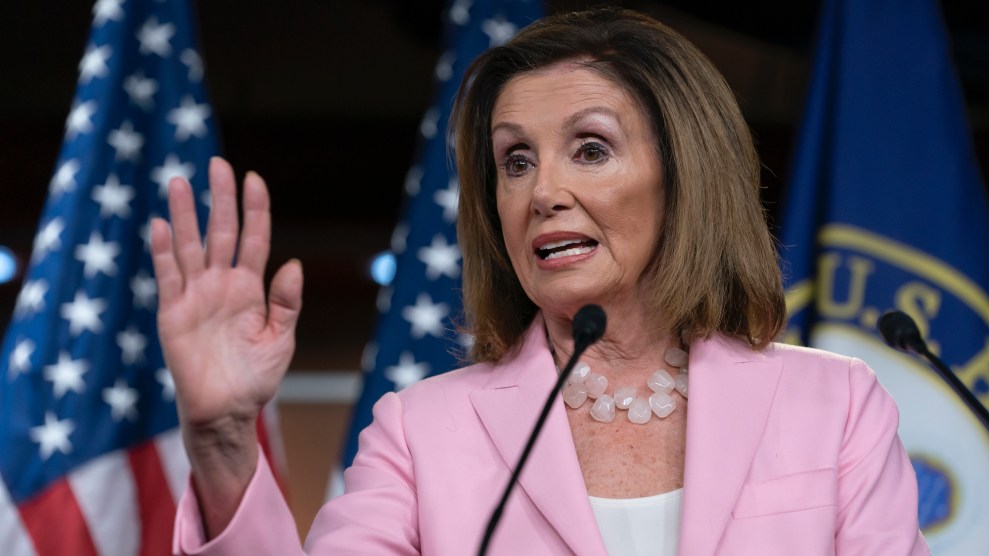 Speaker of the House Nancy Pelosi (D-Calif.) meets with reporters just after the House Judiciary Committee approved guidelines for impeachment hearings on President Donald Trump, at the Capitol in Washington on Sept. 12, 2019.J. Scott Applewhite/AP

Update, 5:30 p.m. ET: House Speaker Nancy Pelosi announced Tuesday evening that the House will move forward with an impeachment inquiry. Pelosi reportedly decided not to create a select committee specifically to investigate Trump’s Ukraine scandal. Instead, she said she will direct six House committees to “proceed with their investigations under that umbrella of impeachment inquiry.”

House Speaker Nancy Pelosi, who has so far resisted Democratic calls for impeachment, is considering setting up a select committee to investigate President Donald Trump’s interactions with Ukraine, according to several House sources. Progressive Democrats are concerned that this move might be an attempt to remove the Ukraine scandal—in which Trump allegedly threatened to withhold aid from Ukraine if its government did not investigate former vice president Joe Biden—from the ongoing impeachment inquiry being mounted by the House Judiciary Committee, chaired by Rep. Jerry Nadler (D-N.Y.).

“We don’t want Nadler to be sidelined.”

Some progressives within the House caucus are wondering why Pelosi would not follow a different course: allow the House Intelligence Committee, chaired by Rep. Adam Schiff (D-Calif.), to probe the Ukraine controversy and then share its findings with Nadler’s committee for possible inclusion into that panel’s consideration of impeachment. Setting up a select committee on this matter, the progressives fear, could distance Nadler—who is more eager to pursue impeachment than Pelosi is—from what could possibly be another foundation for impeachment. “We don’t want Nadler to be sidelined,” said a senior aide to a member of the Congressional Progressive Caucus, the influential group of nearly 100 liberal House Democrats. Nadler’s committee includes many fiery progressives who have been at the forefront of the impeachment push.

Reps. Pramila Jayapal (D-Wash.) and Mark Pocan (D-Wisc.), who co-chair the CPC, oppose the creation of a new committee. “A select committee will take a long time,” Jayapal, a member of Judiciary, told reporters Tuesday afternoon.

According to one aide to a member of House leadership, conversations with members and staff suggest that many within the caucus support creating a select committee on the Trump-Ukraine scandal and that many Democrats would like the membership of this new committee to represent the diverse political viewpoints within the caucus. That is, some Democrats see this action as a way to shift a piece of the impeachment story away from Nadler and his progressive-dominated committee.

An aide to a different member of House leadership said the concern wasn’t about the progressives on the Judiciary Committee but instead reflected a lack of confidence in Nadler’s staff to orchestrate a successful impeachment inquiry. Both aides cited the recent Judiciary hearings involving special counsel Robert Mueller and former Trump campaign manager Corey Lewandowski as failed attempts to clearly convey allegations against Trump. “We haven’t been able to create a clear message about what we’re doing,” the second aide said. “People don’t have faith in being able to course-correct right now. We need to be able to show the American people that we can take this seriously by holding Trump accountable for his actions.”

Pelosi’s office did not respond to a request for comment.

Details on the possible select committee have been sketchy. There has been no word on who would chair the panel or who exactly would be part of it. (Pelosi has the authority to name committee chairs and members.) On Tuesday afternoon, Pelosi is scheduled to huddle with the six committee chairs who have led investigations of the Trump administration and then hold a members-only, closed-door meeting with the entire Democratic caucus to gauge its willingness to proceed with impeachment. This conversation is expected to include consideration of the select committee. Afterward, progressives will presumably be in a better position to determine if there’s a reason to oppose its establishment. The full House would have to vote on a resolution to establish the select committee.

* This story has been updated.