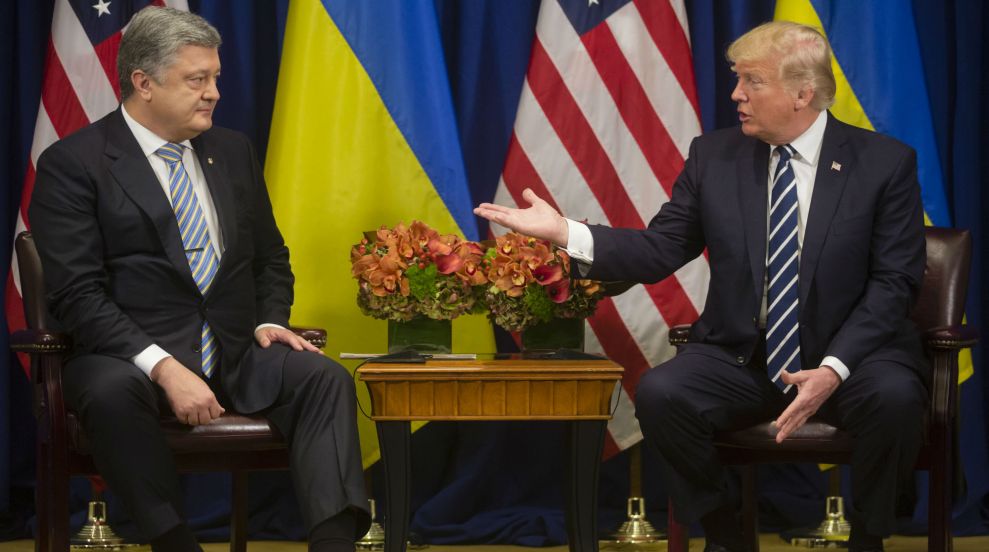 Democrats want to know if Donald Trump pressured Petro Poroshenko during the 72nd session of the United Nations.Mikhail Palinchak\TASS via Getty

In May 2018, the New York Times broke a significant story about Ukraine that did not receive great attention at the time: The nation’s chief prosecutor had halted cooperation with special counsel Robert Mueller’s Trump-Russia investigation and had essentially shut down four Ukrainian criminal inquiries related to Mueller’s work. Ukrainian lawmakers said their government took these steps out of fear of upsetting Trump and jeopardizing a deal that would supply Ukraine Javelin anti-tank missiles for its ongoing conflict with Russia, which occupied portions of the country. In response to that story, several US senators, wondering if the investigations had been sidelined as an act of Trump-Ukraine collusion, requested information from the Ukrainian prosecutor. He did not cooperate and blew off their request. This is the same prosecutor who now happens to be in the middle of the latest scandal.

The Times article naturally raised suspicions. The four Ukrainian investigations that were frozen concerned Paul Manafort, Trump’s former campaign chair, who had made millions in Ukraine as a consultant for the corrupt and ousted President Viktor Yanukovych and his political party. (Manafort is now in federal prison, convicted of tax fraud, money laundering, and other charges related to his endeavors in Ukraine.) And Ukrainian officials also let a key potential witness for Mueller—a Russian Ukrainian business partner of Manafort named Konstantin Kilimnik, who the FBI concluded was associated with Russian intelligence—leave Ukraine before Mueller’s investigators could question him. The reason for all this was obvious: “In every possible way, we will avoid irritating the top American officials,” a member of Ukraine’s parliament told the Times. “We shouldn’t spoil relations with the administration.”

Three Democratic senators—Patrick Leahy, Dick Durbin, and Robert Menendez—quickly fired off a letter to Yuri Lutsenko, then Ukraine’s general prosecutor, expressing their “great concern about reports that your office has taken steps to impede cooperation” with Muller’s investigation. The letter asked Lutsenko to explain these moves. It also raised the issue of whether Trump and his crew had pushed the Ukrainians to quash these probes. “Did any individual from the Trump Administration, or anyone acting on its behalf, encourage Ukrainian government or law enforcement officials not to cooperate with the investigation of Special Counsel Robert Mueller?” the lawmakers inquired. They also asked if there had been any discussion of the Mueller probe between Ukrainian and US officials when Trump met then-President Petro Poroshenko the previous year.

This was a serious matter. The senators were asking if there had been some underhanded collusion, a quid pro quo: missiles for blocking Mueller. Lutsenko did not answer their questions, according to a Menendez spokesperson.

Lutsenko has since gone on to become a key player in the Trump-Ukraine scandal. After meeting with Rudy Giuliani, Trump’s personal lawyer, early this year, Lutsenko began making allegations about the activities of Joe Biden and his son Hunter in Ukraine—unproven accusations that were seized upon by conservative media in the United States and that Trump and his defenders have used to distract from the July 25 phone call during which Ukrainian President Volodymyr Zelensky asked about buying more Javelin missiles and Trump leaned on him to produce negative information that Trump could use to discredit the Trump-Russia investigation and Biden. Lutsenko subsequently walked backed his claims. He recently told the Los Angeles Times that he has repeatedly rebuffed demands from Giuliani to provide dirt on the Bidens and that Lutsenko had seen no evidence that they engaged in any wrongdoing.

The unanswered letter sent by the senators to Lutsenko leaves a big hanging question: Did Trump in any way try to pressure the Ukraine government to impede Mueller a year before Trump phoned Zelensky and asked for this favor? No doubt, Lutsenko is already on a list of potential witnesses for the House Intelligence Committee investigation of Trump and Giuliani’s actions in Ukraine. If House investigators question him, the 2018 episode would be a natural topic in addition to his more recent interactions with Giuliani.

Meanwhile, Trump, in his up-is-down fashion, has tried to turn the senator’s letter into evidence that exonerates him. In a press conference last week, Trump declared it was really Democrats who had improperly threatened Zelensky. “They threatened him if he didn’t do things,” Trump said. He was apparently referring to a line in the note from the Democratic senators pointing out that blocking cooperation with Mueller “sends a worrying signal—to the Ukrainian people as well as the international community—about your government’s commitment broadly to support justice and the rule of law.”

Trump’s claim about the Democrats and the letter was false. He overlooked the key fact that Democrats sent this letter in May 2018, long before Zelensky’s defeat of Poroshenko in April 2019. They were not pressuring Zelensky. Nor was there any threat in the letter—just an obvious reminder that impeding these investigations would cause the international community to question the government’s commitment to lessening corruption, a critical issue for Ukraine, as it sought aid from Western nations.

But by referring to this letter, Trump did highlight an aspect of the Ukraine scandal that has not received much notice. In the complaint filed with the intelligence community’s inspector general, the whistleblower who kicked off this scandal contended that Trump’s call with Zelensky was part of a larger pattern of the president improperly bullying the former Soviet state. With Trump’s pressure on Zelensky now exposed, whether Trump and his allies also pushed Poroshenko for political help a year earlier is a more pressing matter.

“The Ukrainians were justifiably concerned that Trump would exact revenge by blocking security assistance if they did not act in his political favor,” Durbin, Menendez, and Leahy said in a statement last week. “It turns out that was truer than any of us could have imagined. Yes, we were worried that the President of the United States would abuse his office and leverage U.S. security assistance for his own personal agenda back in 2018. It looks like we were right then and we are right now.”