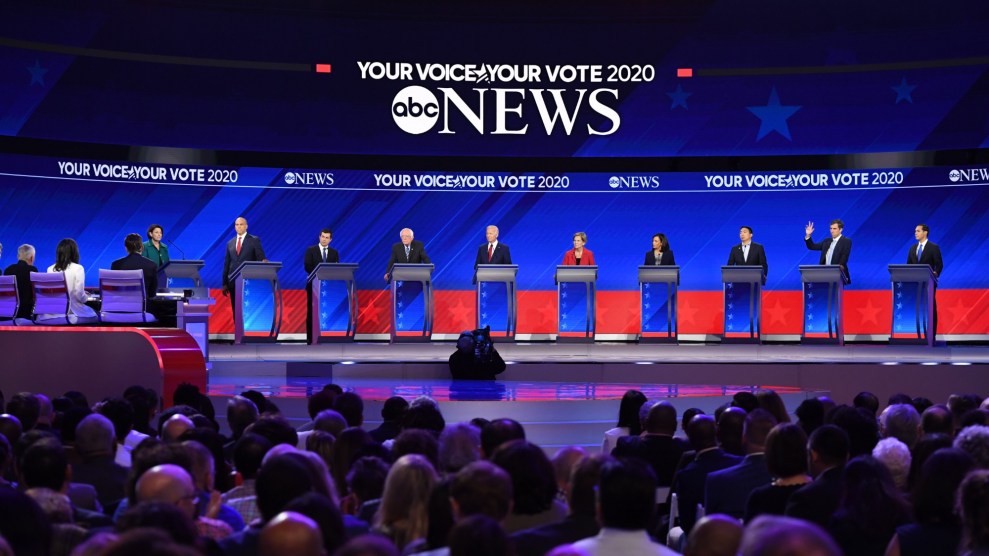 The top 10 Democrats running for president repeated campaign promises to escalate US aid to Central American countries and welcome more refugees as they debated Thursday in Houston.

And while they argued over differences on immigration and the climate crisis, no one mentioned the climate refugee crisis unfolding right now.

Last weekend, at least 119 Bahamians fleeing the destruction left by Hurricane Dorian were forced off a ferry headed for the east coast of Florida because they lacked visas.

This came despite visa-free travel between the United States and the Bahamas, a trip so common some make it without even needing passports. On Monday, President Donald Trump defended denying them access, claiming that among the refugees were “very bad people and some very bad gang members and some very very bad drug dealers.”

That same day, the Department of Homeland Security issued a new guidance cementing the visa requirement, meaning that the roughly 15,000 people on the devastated island who are without food or shelter can’t expect to seek relief in the US.

The Category 5 storm flooded 70 percent of homes in the Bahamas. Two weeks later, the death toll, now at 50, is expected to rise as more than 1,300 Bahamians are still listed as missing.

The hurricane, Bahamian journalist Bernard Ferguson wrote in The New Yorker, is a clear case of “climate injustice” as a storm strengthened by global warming wreaked havoc on a country that contributed among the least planet-heating emissions.

The ABC News-Univision moderators did ask about one storm—Hurricane Harvey, the Category 4 storm that drenched Houston two years ago. That lone question went to former Rep. Beto O’Rourke of Texas, whom the moderators asked, “What meaningful action will you take to reverse the effect of climate change?”

O’Rourke gave a detailed answer, vowing to “make sure that we free ourselves from a dependence on fossil fuels” and embrace agricultural practices to store more carbon dioxide in soil. Four other candidates—Sens. Amy Klobuchar (D-Minn.), Elizabeth Warren (D-Mass.), Kamala Harris (D-Calif.) and businessman Andrew Yang—offered timelines for slashing emissions and plans to overpower the fossil fuel industry’s influence. All three senators, plus Sen. Cory Booker (D-N.J.), co-sponsored a bill this week to grant temporary protected status to Bahamians escaping the destruction.

But none brought up the people or places already suffering the extreme weather and insufficient infrastructure that scientists have long warned makes climate change deadly. Catastrophic weather has displaced on average 24 million people per year since 2008, according to the Swiss-based Internal Displacement Monitoring Centre. By 2050, that number could climb to anywhere from 140 million to 300 million to 1 billion. Since taking office, Trump has set a record-low cap of 45,000 on refugee applicants.

Answering a question about withdrawing troops from Afghanistan, Yang warned that the United States is “not very good at rebuilding countries.” To illustrate his point, he briefly made the night’s only mention of Puerto Rico, the US territory where more than 3,000 people died after Hurricane María made landfall in September 2017.

“If you want proof, all you have to do is look within our own country of Puerto Rico,” Yang said.

Puerto Rico offers a useful contrast to the Bahamas. As US citizens, Puerto Ricans fled by the thousands to Florida, New York, Massachusetts and other states. Bahamians—whose country, as a British colony until 1973, was spared the United States’ imperial expansion in the early 20th century—don’t have that same option.