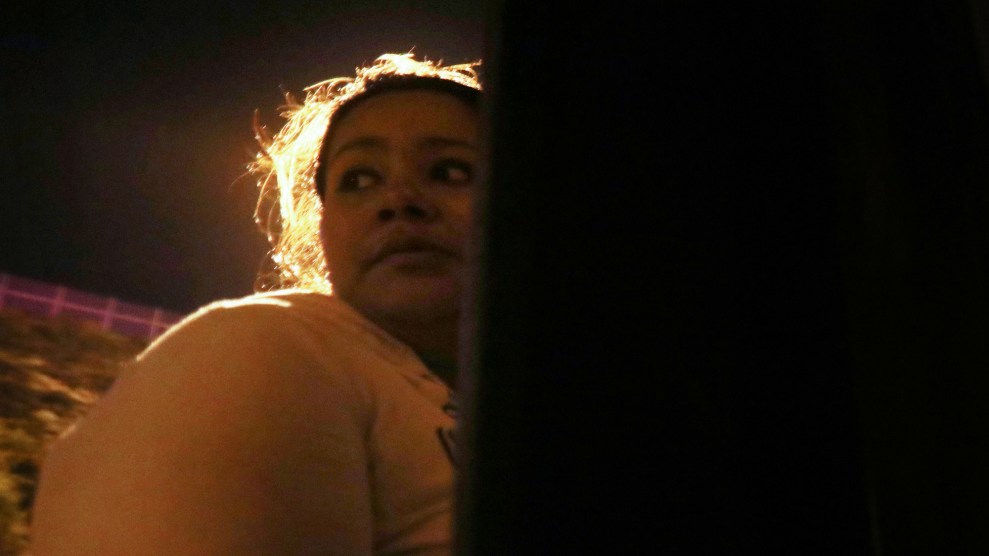 A few weeks ago, Sister Salome Limas started fielding some unusual requests at the women’s shelter she runs in Tijuana: The Central American asylum seekers staying at Instituto Madre Asunta began asking if she could let them out in the middle of the night so they could go to court in the United States. The women then showed her paperwork from US immigration officials, directing them to show up to the Mexican side of the San Ysidro Port of Entry at 3:30 a.m.

Limas didn’t understand why they’d need to be there at such a perilous time, especially in the murder capital of the world. For security reasons, Instituto Madre Asunta’s gates are always locked, and people staying at the shelter aren’t allowed to leave at night. So when the women said they had to leave at 3 in the morning, Limas suggested they get a hotel room closer to the port of entry—the walk from the shelter to the border is about 2 miles, through a neighborhood known for drug and alcohol abuse—and stay there for a few hours. It’d simply be too dangerous to leave the shelter with their kids at that hour.

As it turns out, the women in Limas’ shelter weren’t the only ones getting notices to arrive at the border in the dead of night. Attorneys working along the US-Mexico border confirmed to Mother Jones that clients with asylum hearings from San Diego to El Paso have had to wait at ports of entry well before daybreak—putting an already vulnerable population in unnecessarily dangerous situations.

It’d simply be too dangerous to leave the shelter with their kids at that hour.

A US Customs and Border Protection official said that these asylum seekers are typically given a call time four hours prior to their court time “to allow for processing.” They previously had applied for asylum in the United States before being sent back to Mexico to wait on their cases under the Trump administration’s so-called Remain in Mexico policy. (More than 42,000 asylum seekers—most of them from Guatemala, El Salvador, and Honduras—have been returned to Mexican border cities so far.) “But when people get there, there’s a lot of sitting around on the Mexican side,” said Lisa Knox, an attorney with the Oakland, California–based Centro Legal de la Raza who first heard of these early call times a couple of weeks ago. “They could certainly have people arrive at 6 a.m. and still get to court on time.”

The courthouse in San Diego where immigration hearings take place is a 25-minute drive from the San Ysidro Port of Entry. Until recently, Knox said, most Remain in Mexico asylum seekers had court in the afternoon and were asked to show up around 8 or 9 a.m. “But, like everything in this process, there’s something very intentional in all of this to make it as difficult as possible,” she said, echoing a common refrain among advocates that the Trump administration is making the asylum process additionally burdensome so migrants give up on their cases or don’t show up at the border in the first place.

“Like everything in this process, there’s something very intentional in all of this to make it as difficult as possible.”

For decades, migrants in Mexican border cities have been targeted by criminal organizations and even law enforcement, mainly because they’re easy prey: They’re not familiar with the area and often carry cash for their journey. But with the implementation of Remain in Mexico, migrants from Central America and other parts of the world aren’t just passing through these border cities—they’re being forced to wait there for months, trying to get by in shelters and even on the streets. As the nonprofit Human Rights First has documented, migrants who are subject to Remain in Mexico have been victims of rape, kidnapping, assault, and other violent crimes. Some have died while waiting at the border in Mexico, and, as a Los Angeles Times story recently reported, the “human cost is rising”—which is why advocates are aghast at the government’s decision to force women and children to report to the port of entry in the middle of the night.

I recently spoke to a woman from Ecuador—I’ll call her Diana—who was told to show up to the border at 3:30 a.m. last week. She has been traveling with her teenage daughter and told me she was scared of having to walk through the dark streets of Tijuana, but she decided to do it because she didn’t want to miss her court date. “Thank God nothing happened to us,” Diana said.

The evening before they had to show up at the port of entry, Diana was able to find a room closer to the border. It didn’t have running water, but she took it anyway. “We went there to rest,” she said, “even though I couldn’t sleep at all.”

Then, at 3 a.m., Diana and her daughter left the room and walked quickly, sometimes almost jogging, to get to the relative safety of the border as soon as possible. She said she saw a Mexican military guard on the street but wasn’t sure if he’d be a good guy or a bad guy, so they sped past him. They kept going until they got to the port of entry. The guards told them to wait, and she said there were a few families with little kids who looked like they had slept out there on the ground.

She said she saw a Mexican military guard on the street but wasn’t sure if he’d be a good guy or a bad guy, so they sped past him.

Diana told me it wasn’t until about 5:30 or 6 a.m. that US immigration officials started processing the group that morning. There were about 70 people going to court in San Diego, she said, and the first court hearings were scheduled for 8 a.m. (Diana asked that we not use her real name in this story out of fear that her case could be jeopardized.)

“While we can’t speak [to] the situation described by your contact in Tijuana,” the Customs and Border Protection official told me, “we can say that at the San Ysidro [Port of Entry], CBP normally begins the intake process at 4 a.m.” The official said that people may not be transferred to Immigration and Customs Enforcement until 6 a.m. but that “CBP starts the process at 4 a.m. to have them ready for transport” by 6 and at the court by 7:30. (ICE is the agency in charge of transporting people from the border to the courthouse and back, and CBP is in charge of processing people at the ports.)

Diana said she was told to arrive at 3:30 because if she didn’t, she would not be able to go to court that day, and she wanted to show up to explain to the judge why they couldn’t go back to Ecuador. Diana didn’t get into the specifics with me, but she did say the violence they fled included sexual violence. “And that also happened here in Mexico,” she added. That’s why she also asked the judge not to be sent back to Tijuana—she feared for her safety and the safety of her daughter.

She said that not much came out of that hearing. From what she could tell there were no changes to her asylum request and no clear direction about what would happen next or how to get legal representation. She received more paperwork instructing her to repeat the process for an upcoming hearing in the coming weeks, this time with a call time of 4 a.m.

Later that afternoon, Diana and her daughter joined the rest of the migrants who’d had court that day on a bus back to the port of entry. But unlike everyone, else they were detained overnight because Diana had expressed a fear of returning to Mexico. She was lucky enough to have the judge direct port officials to conduct an interview about the risks in returning to Mexico: Only about 25 percent of immigration judges in June and July even inquired about migrants’ fear of returning to Mexico, according to a Human Rights First report.

“I told him everything that’s happened to us already here in Mexico, but he sent us back anyway.”

After spending the night with her daughter in a frigid holding cell known as a hielera, or icebox, Diana was interviewed by a US immigration official in the morning. “I told him everything that’s happened to us already here in Mexico,” she said, “but he sent us back anyway.”

So she went back to the Tijuana women’s shelter with her daughter, and Sister Limas welcomed her with open arms. Later that week another woman who was also staying at the shelter asked Diana for help figuring out how to make it to her appointment and where to stay. She was especially worried because she was traveling with her two small children.

There wasn’t much Diana could do, other than tell the woman where she’d stayed and hope that, by the time the woman and her kids arrived, the room would once again have running water.