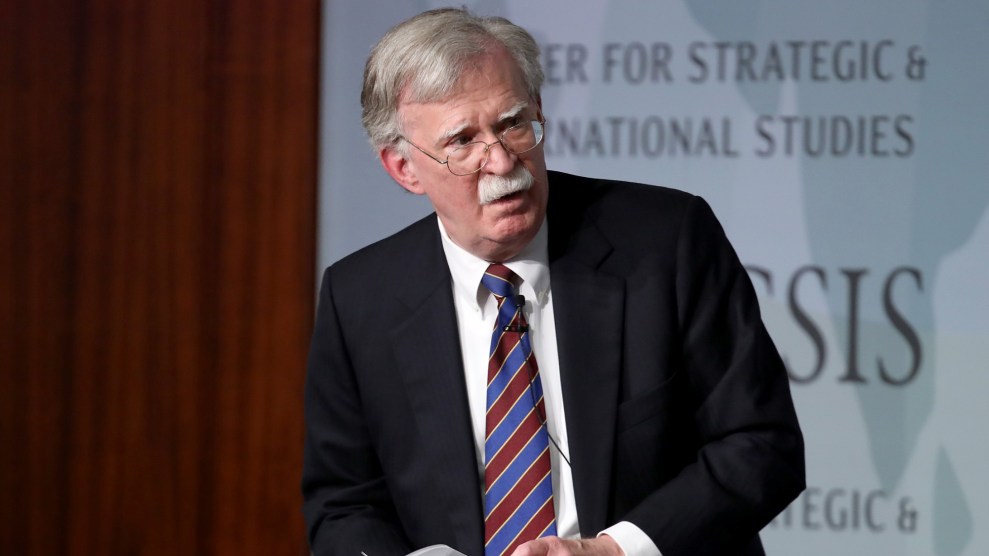 Twenty days after his firing as President Donald Trump’s national security adviser, John Bolton re-emerged onto the public stage, delivering remarks about North Korea that directly contradict his former boss’s pursuit of a grand bargain under which the Hermit Kingdom would give up its nuclear weapons. “The strategic decision Kim Jong Un is operating through is that he will do whatever he can to keep a deliverable nuclear weapons capability and to develop and enhance it further,” Bolton said.

This assessment contrasts markedly with Trump’s stated belief that Kim’s “great and beautiful vision for his country” will lead to a promising deal in which the North dismantles its nuclear weapons in exchange for relief from economic sanctions and closer diplomatic ties to the United States. Bolton, who once advocated preemptively bombing the rogue state, has viewed negotiations between the longtime adversaries skeptically.

The disparity between Bolton’s views and Trump’s was on sharp display during Bolton’s appearance Monday at the Center for Strategic and International Studies in Washington. At the event, co-hosted by a South Korean newspaper, he spoke at length about the Korean Peninsula conflict, alluding at times to his reputation for holding views that are far more hawkish than those of the president. “I am delighted to be here today,” he said. “I’m also sure the leadership of North Korea is delighted that I’m here today in a private capacity.”

Bolton has long been a popular punching bag in the North Korean state press, which once referred to him as a “human defect.” Trump, too, ultimately grew tired of Bolton’s approach— specifically Bolton’s suggestion last year that US policy toward North Korea mirror the so-called “Libyan model,” a reference to dictator Moammar Qaddafi’s decision to relinquish Libya’s nuclear weapons program nearly two decades ago. In Bolton’s view, the credible threat of regime change following the 2003 US invasion of Iraq convinced Qaddafi to disarm. (Bolton helped craft the case for the invasion while working in the Bush State Department and still supports the Iraq war.) Kim did not appreciate that comparison—Qaddafi, of course, was later overthrown and killed during an Arab Spring revolution supported by the US—and the comment nearly sunk Trump’s early diplomacy with the North last year.

After joining Trump’s negotiating team for two summits with Kim last year, Bolton was banished to Mongolia on diplomatic business when Trump convened with Kim for a third meeting in late June. Two months later, Bolton was fired by tweet.

After his exit, Bolton assured reporters that he would “have my say in due course.” Monday’s event did not provide the Trump-specific details that Washington national security watchers might have been hoping for, but Bolton’s displeasure with his former boss was clear. When moderator Victor Cha, a former George W. Bush administration official, asked Bolton if “romance diplomacy” was the best way to get the North to denuclearize—a clear dig at Trump’s eyebrow-raising claim that he and Kim “fell in love,” Bolton didn’t take the bait. “I’m not going to comment on that,” he said. “Nice try.”

If his policy differences with Trump were not already apparent, Bolton left no doubt at other points in the discussion that he did not think Trump would ever be able to convince Kim to dismantle his nuclear program, which is now far more developed than Libya’s was when Qaddafi gave it up. Kim “may make some concessions, but under current circumstances, he will never give up the nuclear weapons voluntarily,” Bolton said.

Instead, Bolton argued, the Libya model—which Trump called a “disaster” after firing Bolton—could still bear fruit if the US produced the same variables that led to Qaddafi giving up his weapons: mainly, the threat of military action. “At that period, we saw Moammar Qaddafi make an unambiguous decision that he and Libya would be better off without developing nuclear weapons,” Bolton said, noting that the Libyan dictator arrived at that decision after seeing the fall of Saddam Hussein’s regime and his capture by US forces. “Not only have we seen nothing like that from North Korea, we’ve seen the opposite.”