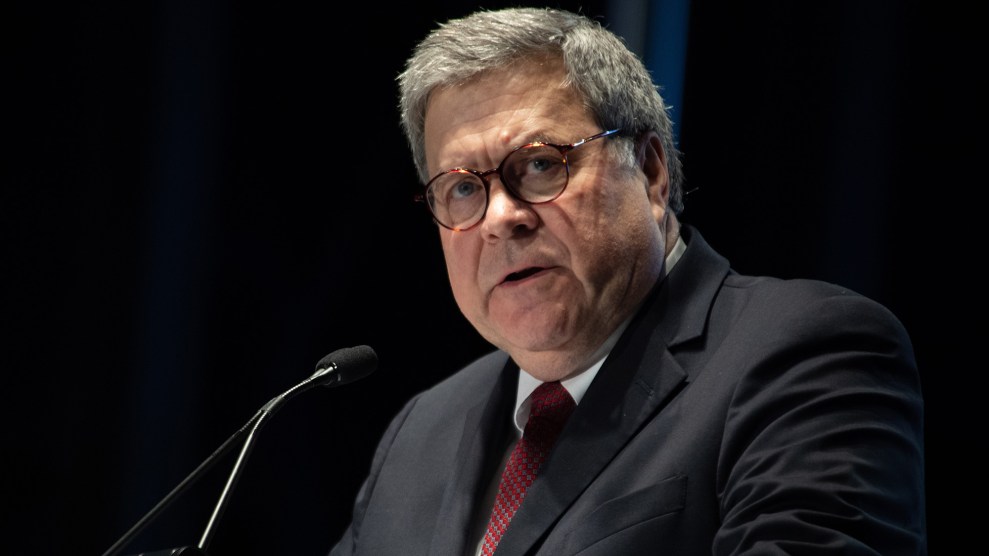 Attorney General William Barr delivers remarks at a vigil for law enforcement officers killed in the line of duty on May 14, 2019 in Washington, DC. Shane T. Mccoy via ZUMA

Experts blame grim economic conditions and the predatory practices of pharmaceutical companies for the current opioid epidemic. Unrest and violence on the part of young men is often attributed to economic conditions and accessibility of fringe ideologies online. But Attorney General Bill Barr apparently has a different theory for both of these problems: not enough religion.

In a speech at University of Notre Dame’s law school Friday, Barr blamed “secularists” and “so-called progressives” for wreaking havoc on American society. Barr’s depiction of a war between the non-religious and people of faith shocked legal experts, who saw Barr’s defense of religious freedom as an assault on the First Amendment’s protection against the government’s establishment of any religion.

“This is not decay,” Barr said. “This is organized destruction. Secularists and their allies have marshaled all the forces of mass communication, popular culture, the entertainment industry, and academia in an unremitting assault on religion & traditional values.” (Barr spent years profiting off of these same industries he is attacking. He served as general counsel at Verizon for eight years, held a had a paid position on the board of Time Warner for nine, and represented telecoms giant GTE in the 1990s.)

The top prosecutor of the United States — a secular nation with no state religion, and whose legislators are forbidden to establish one under the First Amendment of its Constitution — slams “secularists and their allies.” https://t.co/AIcZu17PDO

In his address Friday, Barr thundered against what he described as a “moral upheaval.” “Virtually every measure of social pathology continues to gain ground,” he said. “Along with the wreckage of the family we are seeing record levels of depression and mental illness, dispirited young people, soaring suicide rates, increasing numbers of alienated young males, an increase in senseless violence and the deadly drug epidemic.”

Barr pointed particularly to public schools, according to an account of the speech from the Indianapolis Star. “Ground zero for these attacks on religion are the schools,” Barr said. “To me this is the most serious challenge to religious liberty today.” There is decades of Supreme Court caselaw removing religion from public schools because the First Amendment bans the government from establishing or giving primacy to a religion.

This isn’t the first time Barr has decried secular culture. He has been an advocate for more religion in American government, schools, and law for decades and has a history of involvement with conservative religious groups including the Becket Fund for Religious Liberty, which litigated the Hobby Lobby case that allowed employers not to cover contraception coverage to employees. In 1995, for example, Barr penned an essay blaming “a steady and mounting assault on traditional values” since the 1960s for “soaring juvenile crime, widespread drug addiction and skyrocketing venereal diseases.”

Barr’s comments come as he is under a cloud of scandal for his active involvement in trying to find evidence of the unproven theory that Ukraine colluded with Democrats during the 2016 election—an effort that took Barr to Italy this year and may have dragged him into the Ukraine scandal that set of an impeachment inquiry into President Donald Trump.

On Twitter, legal experts reacted to Barr’s speech with dismay.

This is basically the position of our Justice Department, dressed up with some legalese, in a variety of cases. https://t.co/T4Zd8shdck

This is repugnant. I'm comfortable talking about faith in public, but he was invited to speak at a law school because he's the Attorney general. His job is to defend the 1st Amendment. But this immoral, unpatriotic borderline monarchist and defender of corruption has other ideas. https://t.co/rtKsmOPW2v

This is a very dark vision-an attorney general who thinks his job is to protect “traditional values.” https://t.co/3JLDaedVRW