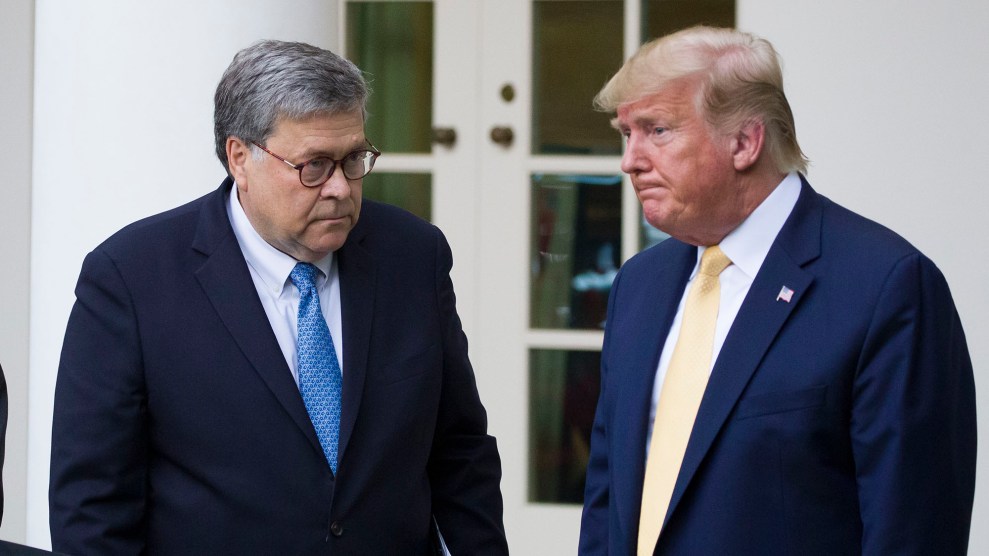 The son of one of President Donald Trump’s most vocal defenders has a new gig in Trump’s Justice Department. Brady Toensing—whose mother Victoria Toensing and and step-father Joe diGenova are key players in the rapidly growing Ukraine scandal—joined the DOJ in June as a senior counsel in its Office of Legal Policy.

The DOJ won’t say how Brady Toensing got the job, but the entire family has close ties to Trump. In 2016, Brady Toensing served as Trump’s Vermont campaign chair. Last year, Victoria Toensing and diGenova—a husband-and-wife legal team who frequently appear on Fox News—agreed to represent Trump in special counsel Robert Mueller’s Russia probe. That arrangement quickly fell through, but the couple has since worked with Trump attorney Rudy Giuliani to dig up damaging information on Joe Biden in Ukraine and advance bogus theories about the origin of the Russia probe. They also represent Dmytro Firtash, a Kremlin-linked Ukrainian oligarch fighting extradition to the United States on bribery charges. Firtash reportedly employed two Giuliani associates who were involved in the effort to smear Biden and were arrested last week on campaign finance charges.

There’s no evidence that Brady Toensing’s new role, which was first reported by Vermont outlets in June, would intersect with his family’s legal work. The Office of Legal Policy typically deals with DOJ-wide policies and judicial appointments, and Brady Toensing told friends when he took the job that he would be working on nominations—including helping pick a Supreme Court nominee to fill any potential vacancy, one source said. DOJ has not responded to multiple inquiries about what, exactly, his work entails. Brady Toensing directed questions to a Justice Department spokesman.

On Friday that DOJ spokesman said: “Under the OGE ethics standards, since Brady Toensing joined the Department of Justice he is recused from being involved in matters relating to his former firm, including matters that arose before or after his departure from the firm.”

Reached by phone Monday, Victoria Toensing declined to speak on the record and hung up abruptly.

Brady Toensing says in an online bio that he worked for his mother and step-father’s firm, diGenova & Toensing, from 1996 until he joined DOJ. That included the six-day period between the announcement that the firm would join Trump’s defense team and the news it would not do so due to conflicts of interests resulting from its representation of other clients involved in the Trump-Russia scandal, including Blackwater Founder Erik Prince, former Trump legal team spokesman Mark Corallo, and the former Trump campaign aide Sam Clovis. It’s not clear if the family firm actually did any legal work for Trump during that period, but diGenova and Victoria Toensing have since functioned almost as de facto members of Trump’s defense, promoting his interests on television and elsewhere and sharing information with Giuliani that he has disseminated in the media.

For decades, dating to their involvement in efforts to impeach President Bill Clinton, diGenova and Victoria Toensing have combined legal work with outspoken right-wing punditry on Fox News and in conservative publications. On Fox last week, diGenova, who regularly touts conspiracy theories regarding alleged plots against Trump, referred to two anonymous whistleblowers in the Ukraine scandal as “suicide bombers.” He accused Democrats investigating Trump of “sedition” and “regicide,” a word that suggests unconventional views about American democracy.

For most of his two decades at diGenova & Toensing, Brady Toensing split his time between Washington, DC, and Charlotte, Vermont, where he gained a reputation as a right-wing muckraker known for adeptly using public records requests and other legal filings to attack political adversaries. His targets were all on the left. But Toensing has said he is interested in transparency. “It’s important to hold elected officials accountable,” he told VTDigger, a Vermont publication, last year.

Toensing played a key role in promoting allegations about Jane Sanders, the wife of Sen. Bernie Sanders (I-Vt.). In 2016, he pushed claims that Jane Sanders, as president of Burlington College, committed fraud by overstating the value of donations pledged to the small school in order to secure financing to buy $10 million of property to expand the school’s campus. The failed deal saddled the school with debt that contributed to its closing in 2016. Toensing’s accusations sparked an investigation into Sanders by the US attorney’s office in Vermont. Prosecutors dropped the probe in early 2018, according to Jane Sanders, who denied wrongdoing. Bernie Sanders has cited Toensing’s role in the investigation to dismiss it as politically motivated.

In 2017, Toensing he applied to run the same US attorney’s office that was at the time investigating Sanders, according to local news reports. He was one of three finalists for the post, but he was handicapped by his association with Trump backers—who were at odds with Vermont’s more moderate Republicans—as well as by his adversarial relationship with Democrats, a person tracking Vermont politics said. Toensing was “blackballed” for the post by Vermont Gov. Phil Scott (R) and Sen. Patrick Leahy (D-Vt.), the person said. The two officials had an agreement to jointly sign off on the US attorney pick, though the nomination is officially made by the president.

Now Toensing has found his way into a senior Justice Department spot that doesn’t require Senate confirmation. It’s unclear exactly why he was hired or what he’s doing there. When it comes to a self-described transparency proponent, that’s a disappointment.

*This article has been updated with a statement from a Justice Department spokesman.