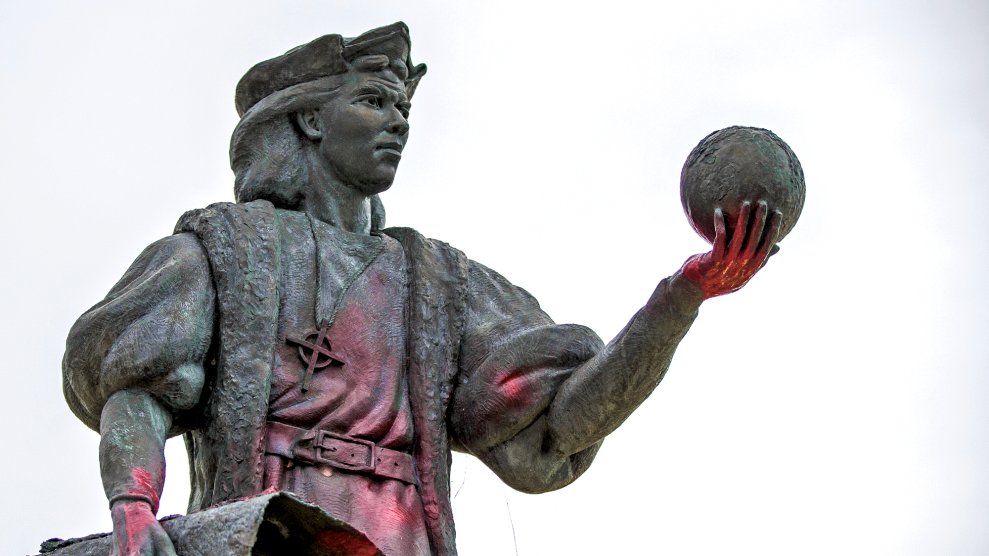 A statue of Christopher Columbus in Mishawaka, Indiana, defaced during the week of Columbus Day in 2017.Robert Franklin/AP

“In 1492, Columbus sailed the ocean blue”—and in 2019, a growing number of US cities and states are recognizing that the cutesy rhyme we learned in school, and the federal holiday named in the explorer’s honor, belies a dark history.

Indigenous people have long resented the holiday, as Columbus’s arrival was the first step in their unfathomable genocide. He and his men enslaved and massacred the indigenous Taíno people, who numbered in the millions upon Columbus’s arrival, and saw their population reduced by as much as 85 percent within a few decades. The brutal colonization of two continents ensued.

The federal holiday, which is always the second Monday in October, plus a bevy of statues and municipal names, continue to glorify Columbus. Yet in recent years, a re-evaluation of history has prompted many state and local governments to distance themselves from his legacy.

Recently, this exploded into nationwide trend. Since 2014, about 100 cities have started observing Indigenous Peoples Day, usually in place of Columbus Day (a few cities celebrate both). Several states are now on board: Alaska and Oregon enacted the holiday in 2017, and this year, Vermont, Maine, New Mexico, and Michigan, as well as Washington, DC, joined them. Hawaiians observe “Discovers’ Day,” which commemorates not Columbus but the indigenous Polynesians who first discovered their islands. In many places, the Indigenous Peoples Day involves parades, ceremonies, and other displays of Native cultures.

Statues and other representations of Columbus are also coming down. The University of Notre Dame announced earlier this year that it would be covering twelve murals depicting the explorer’s early contact in the Americas; the university president called the art “blind to the consequences of Columbus’ voyage.” (Seventy-nine percent of college students across the US support replacing the holiday.) Last year, San Jose, California voted to take down its Columbus statue, and even Columbus, Ohio—the largest of many cities named for the colonist—stopped observing Columbus Day, though it does not yet celebrate Indigenous people instead.

Some Natives point out that celebrating Indigenous Peoples Day isn’t enough. Critics point out that symbolic displays of apology and reconciliation do not put an end to the racism, land grabs, and resource theft that Indigenous people continue to face.

Yet as Confederate statues are pulled down and buildings named for slaveholders get rechristened, it’s hard to deny that at least some Americans are waking up to the truth about their history, and that’s better than staying asleep.