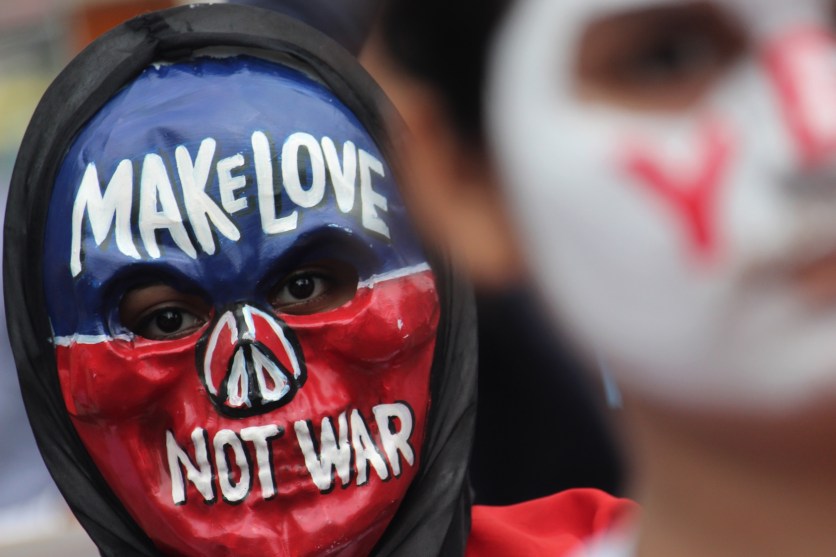 Stipulated: A nuclear war would be real bad. But, like, how bad, exactly? What if it wasn’t all-out, the United States and Russia throwing thousands of warheads at each other, but instead something more limited? Longtime adversaries India and Pakistan have a couple hundred bombs each, tops, according to the best intelligence. Obviously it’d still be a localized nightmare—radiation, flattened cities, death. But whether a regional, so-called limited exchange could have global ecological consequences is a question on which nuclear strategy is disconcertingly quiet.

Climate science, though, is not. “I don’t like the term exchange,” says Alan Robock, a climate resesarcher at Rutgers who’s been studying nukes for three decades. “It’s jargon that nuclear war planners use to not think about the horror they’re planning.” Robock and a few colleagues have, for years, been running the numbers on what scientists in the 1980s called “nuclear winter,” the idea that multiple nuclear detonations would send enough dust, soot, and smoke into the atmosphere to literally block out the sun. With the end of the Cold War, fears of the world ending in both fire and ice faded, but reports of the demise of that demise may have been premature. Not only does President Trump seem to have a somewhat cavalier attitude toward the deployment of nuclear weapons and their wider accessibility, and not only are nuclear treaties crumbling around the world, but those two adjacent South Asian countries I mentioned have nuclear arsenals, and they’ve gone to war with each other before.

In 2007, Robock’s group tried to do the math. They approximated India and Pakistan’s arsenals at the time and imagined a war involving 100 Hiroshima-sized nuclear bombs—15 kilotons—over cities. The results were literally chilling: up to 5 million tons of carbon pumped into the atmosphere as smoke and soot, where climate models predicted it would remain for a decade. In just the first year that’d chop up to 20 days off the growing season in much of the northern hemisphere, resulting in global famines like the one in 1815, the “year without a summer” that followed the volcanic eruption of Mt. Tambora.

Not everyone bought it. In 2018 a team at Los Alamos National Laboratory—where they make, among other things, nuclear weapons—published a more detailed model of both the climate and the fires that’d produce all that carbon, and came to a different conclusion. Sure, that “limited exchange” would put about 4 million tons of carbon into the air, they said, but it wouldn’t stay there. No nuclear winter. We’re saved! Well, not the millions of people who’d die in the conflict, but still.

But now Robock’s back, and his news is not good. India and Pakistan, he says, “have more weapons and they’re more powerful. And they’re the only two countries that have this upward trend.” So for an article in the journal Science Advances this week, his people built a new scenario, something more intense, with about 100 bombs launched by both sides, aimed directly at cities. In that part of the world, those cities are denser, which means more people with more stuff—some percentage of which turns to carbon particles when it burns. And they ran the numbers on carbon again. “There would be between 16 and 37 million tons,” Robock says. “If India and Pakistan had a war, it would be a much larger potential for climate change.” The solutions to that cold equation: 50 to 125 million people dead in the first week. A reduction of as much as 35 percent in sunlight reaching Earth’s surface, translating to a decrease in temperature of up to 5 degrees Celsius, with rainfall decreasing between 15 and 30 percent globally … and the amount of food produced by an equal amount. That’s worldwide famine for a decade.

Now, for sure, you have to accept a few approximations here. You have to believe that the Indian and Pakistani arsenals are that big and that powerful, for one thing, and that they’d use them. Not everyone does. “I don’t think either side is going to unload their entire arsenal. Even in the worst case scenario, you have a few countervalue strikes, which are devastating and horrifying,” says Sameer Lalwani, director of the South Asia Program at the Stimson Center, “but not 60 cities being targeted. I don’t see that happening.”

You also have to believe in the way Robock’s group says nuclear airbursts and the resulting firestorms will behave. They predict pyrocumulonimbus clouds, thunderheads fueled by fire, that pull in the surrounding air and gunk and send it into the upper atmosphere, high enough that rain doesn’t bring the carbon back down to the ground. And you further have to believe they’re right about how cities burn. That requires knowing how much stuff is in a city in the first place—construction materials, consumer goods, and at what density. For now the team uses a per-capita estimate of 11,000 kg of flammable material per person. This was one of the disagreements between Robock’s team and the LANL group.

And you also have to figure out how it all burns, since soot’s the product of inefficient combustion. “We’re also working on explicitly modeling firestorms that would burn in a city and how they would propagate, and we’re doing an inventory of the actual material in specific cities in terms of each building and how much stuff it would have to burn,” Robock says. “Our next result will have much more explicit calculations of how much smoke.”

More data would help, of course. Robock’s hoping Google might contribute. “They have 3D images of every building on the planet,” he says. “But we haven’t been able to talk them into it yet.”

Whether or not Robock is exactly right might not be the most important part here. (He’s clearly the expert; one climate scientist I asked for perspective said they couldn’t help, because they’d “tend to ask Alan about questions on this, which obviously isn’t a good way of getting an independent opinion.”)

The broader point, whether a regional nuclear war causes a global winter or just a regional one—nuclear autumn, maybe?—isn’t even on most strategists’ agendas. George Perkovich, who runs the Nuclear Policy Program at the Carnegie Endowment for International Peace and studies India and Pakistan specifically, says that in multiple interviews with people in the US nuclear weapons establishment, his sources say they’ve never even talked about ecological impacts. Few beside Robock even study the possibility. Robock’s studies are “alarming, and I think it points to what should be the political logic for everybody to conduct these studies,” Perkovich says. “Even if the nuclear war is between India and Pakistan and doesn’t involve the US, if these studies are right and US agriculture is going to be devastated and the global food supply is going to be severely undercut, American people are really going to be hurt.”

Commonly accepted rules of war demand avoiding civilian casualties—absurd enough if a military targets a city with a nuke, but even more absurd if a local war’s consequences spread globally. That’s the kind of thing that war planners should be building into their theories about the use (or, ideally, non-use) of a nuclear arsenal. But they aren’t. “The basic proposition you can derive from this paper is, we have no earthly conception how bad it’s going to be,” Lalwani says. “That extends to the Korean peninsula, the Middle East, to a Russia-US or a US-China exchange, because the assumptions are really hard to pin down, and could be orders of magnitude greater than we have considered.”

That’s the kind of math you’d hope even the most fervent nuclear advocates would build into their equations. “They can’t tell us what their targets are. That’s secret. But we want to build a tool so they can put in the targets and calculate the climate response,” Robock says. “They’re obligated not to kill civilians, but right now they don’t have any way of knowing.” Stipulated: Anything that limits one of these “exchanges” is a good thing—hopefully to the point that they never happen at all, and no one has to find out if Robock is right.