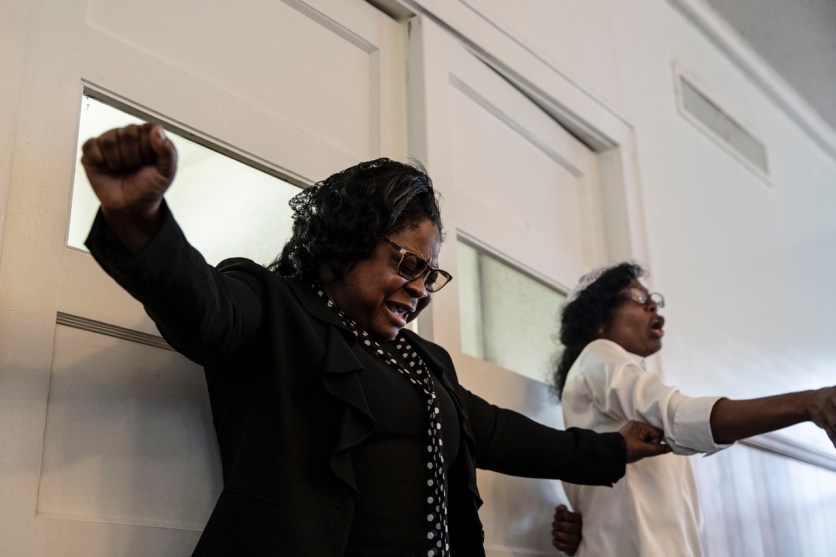 Carrie Barrett (left), a former defendant in a suit brought by a large hospital network, celebrates the cancellation of her mounting medical debt after an investigation by ProPublica and MLK50 Memphis.Andrea Morales for MLK50

In a city where nearly 1 in 4 people live below the poverty line, Memphis’ biggest nonprofit hospital network had filed more than 8,300 lawsuits in five years to collect from patients who couldn’t pay. It even garnished the wages of more than 70 hospital employees for their own treatment.

An investigation exposed the hard-line bill-collection efforts, prompting the hospital network to discontinue its court collection process—and, last week, to erase the unpaid medical debts of more than 6,500 patients. The move followed widespread criticism of Methodist Le Bonheur Healthcare by medical professionals, elected officials, and the United Methodist Church, which is affiliated with the network.

The collection efforts stood out as particularly aggressive to other nonprofit hospitals, which generally do not have to pay taxes in return for significant charity care and financial assistance.

Among the patients relieved of medical debt is Carrie Barrett, whose $12,019 bill for a heart catherization had ballooned to $33,000 as the hospital system piled on its attorneys’ fees, added interest seven times, and garnished her wages 15 times. Barrett, who has a part-time supermarket job, would have had to pay a court-ordered $100 a month for her two nights in the hospital until she was 90 years old.

Barrett got the good news that her bill was wiped clean two weeks ago from a court administrator, she told MLK50 Memphis, the local news site that investigated with ProPublica. “He said, ‘The balance is zero…I said, ‘You don’t know how good that sounds to my ears.’”

Barrett later stood up and made the announcement to her church congregation, which knew of her long struggle with the hospital.

“I just want to thank God for blessings that he has brought to me,” she shouted. “I thank him for the victory!” (MLK50 Memphis)

A superlibrarian’s star turn. Millions of people who use the internet at public libraries have Jean Armour Polly to thank. Long before the web existed, the Liverpool, New York, librarian pushed to get free internet to library patrons, at first through a dial-up service. “I thought, ‘How are we going to get this into the public’s hands?'” said Polly, making the news with her induction last week into the Internet Hall of Fame. Another contribution: She popularized the term “surfing the internet”—and apologized to surfers who were initially offended. (Wired)

Hellraisers’ honeymoon. LaCrystal Robertson and Steve Ferguson met at the General Motors plant. They married. Just after the nuptials on September 21, Robertson and Ferguson, still in their formal attire, joined their fellow employees on the picket line outside GM’s Spring Hill, Tennessee, plant. “Just because it’s our special day,” Ferguson said, “we’re not forgetting about what we’re fighting for.” Their colleagues greeted them with applause. (Washington Post)

The call to help. Rebecca Asaro was 9 when she last saw her dad. Her brother Marc was 7. Last week, they followed their father into service with the New York Fire Department. The Asaros are among 19 new firefighters who had lost a parent on 9/11 or to 9/11-related illnesses. The reward of following in their father’s footsteps, the Asaros said, is in helping others. “I feel like my dad’s with me every step of the way,” Rebecca said, “and it brings me a little closer to him.” (CBS News)

Reunited. For 75 years, cousins and best friends Morris Sana and Simon Mairowitz each believed the other had been killed in the Holocaust. On September 21, after younger members of their families connected on Facebook, the two reunited in Israel. “I know it’s a long time,” said Simon as he held Morris’ face in his hands. “We’ve got each other now.’’ (People)

Recharge salutes: Air Force Tech Sgt. Kenneth O’Brien, who was flying back to the States to accept a heroism award when he saved a baby’s life; the English town of Frome, which began treating loneliness as a medical condition—and found huge medical savings; and Tommy Cash Cosman, who flourished in his last years as a radio talk show host and as a character around his remote Nevada town. He was beloved for the humanity behind his goofy, spiky exterior. “You hear a taunt long enough,” writes John M. Glionna, who profiled Cosman for the Los Angeles Times, “you start to miss it when it’s gone.”

I’ll leave you with these fall colors at Denali National Park in Alaska, via the Interior Department’s Twitter feed. Thanks so much for being part of this week’s Recharge, and have a great week ahead!