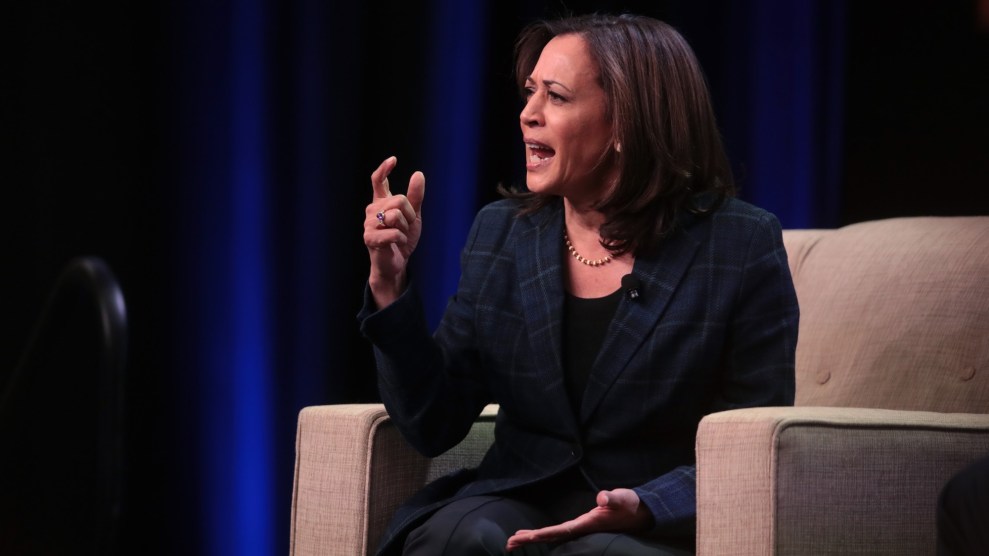 Sen. Kamala Harris (D-Calif.) was one of ten Democratic presidential candidates slated to attend a bipartisan forum on criminal justice reform in South Carolina when she unexpectedly backed out after the event sponsor gave a “bipartisan justice” award to President Donald Trump. In a Twitter post Friday, the former California prosecutor said she would hold a separate event and not “be complicit in papering over his record.”

Now Harris will attend the event following the removal of the sponsor, the 20/20 Bipartisan Justice Group, that bestowed the award on Trump. “She led, and she got results,” said Ian Sams, Harris’ national press secretary, on Twitter.

UPDATE >> Because of Kamala’s protest, the sponsor that awarded Trump has been completely removed from this event and it’s been opened up to HBCU student participation. She led, and she got results. She will now participate in Mayor Benjamin’s forum at Benedict today. https://t.co/XdgBdNjpDU

Harris, who received the same award as Trump in 2016, exchanged blistering tweets with him after Trump blasted her for briefly withdrawing from the forum.

….greatly help the African American community (and all other communities), and which was unable to get done in past administrations despite a tremendous desire for it. This and best unemployment numbers EVER is more than Kamala will EVER be able to do for African Americans!

“My whole life I’ve fought for justice and for the people—something you’d know nothing about,” she replied. “The only part of criminal justice you can claim credit for is the ‘criminal’ part.”

The forum where Trump was honored this week took place at historically black Benedict College, where only seven students were permitted to attend his speech. Other students and faculty members were instructed to remain inside due to “safety concerns and threats of protests,” school spokesperson Kymm Hunter told USA Today. After rejoining the forum, Harris’ campaign said in a press release that her protest would lead to “increased HBCU student participation” in the rest of the forum.

Trump, who grew to prominence among Republicans for parroting the racist lie that President Barack Obama was not born in the United States, has repeatedly deployed racist rhetoric in his speeches and tweets, most recently in one that compared the House’s impeachment inquiry into his conduct to “a lynching.” The comments led to an uproar ahead of Trump’s planned remarks in South Carolina. “I definitely think that those comments were in poor taste, and they were inflammatory, and I think he should apologize,” said Tishaura Jones, Democratic co-chair of the 20/20 Bipartisan Justice Center. “But we’re never gonna get an apology from the president.”

Trump delivered his speech Friday as scheduled, speaking mainly about his administration’s reform bill, but veering near the end to the House’s impeachment inquiry, which he said has made him aware of the impact of an unfair justice system. “You know I have my own experience,” he said. “You see what’s going on with the witch hunt. It’s a terrible thing that’s going on in our country—no crimes—it’s an investigation in search of a crime.”

That same day, a federal judge in Washington, DC issued a ruling that negated the premise of Trump’s comparison. The impeachment inquiry is a legal process, the court decided, entitling lawmakers to evidence the Justice Department had said they were not entitled to.