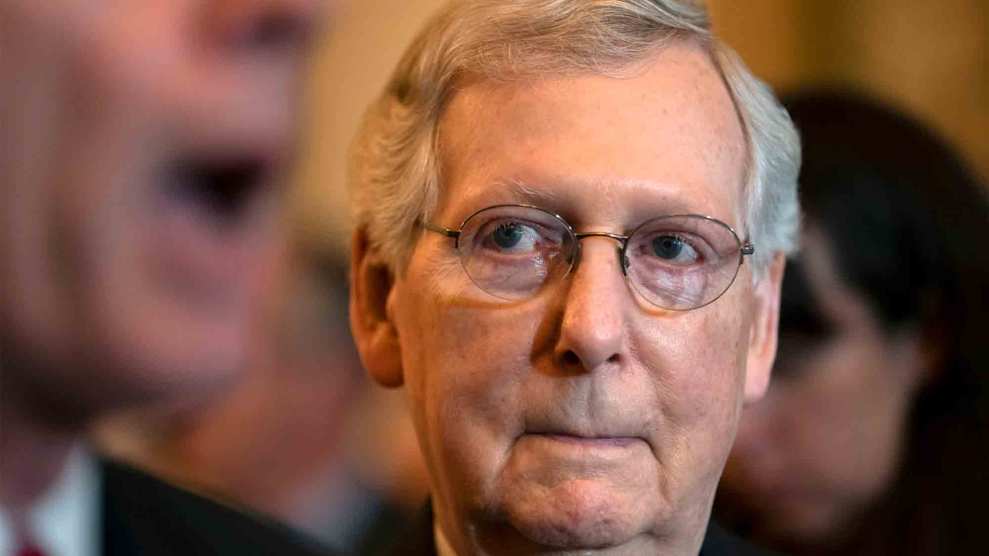 At a lunchtime gathering of Senate Republicans on Wednesday, Mitch McConnell had some news to share about impeachment: Should the House Democrats vote to impeach Donald Trump by Thanksgiving—which appears to be House Speaker Nancy Pelosi’s preferred though perhaps hard-to-meet schedule—the Senate could start and quickly conduct the trial of Trump and wrap it up by Christmas. That, too, might seem an overly ambitious timeline. Action in Congress rarely occurs speedily. But one X-factor in the impeachment process—which so far has received little attention—is that Senate rules afford McConnell and the Republicans plenty of opportunity to derail an impeachment trial and turn the proceedings into a sham.

When House Democrats began raising the volume on impeachment talk earlier this year—especially after the release of special counsel Robert Mueller’s report, which detailed various alleged obstructions of justice committed by Trump—an idea was kicked around by pundits and commentators: What if the House approved articles of impeachment and McConnell refused to hold a trial? Two weeks ago, though, McConnell publicly noted that in the event of a House impeachment, Senate rules would compel the upper body of Congress to stick to the Constitution and put Trump on trial. But what sort of a trial might that be, if the Republican Senate majority did not truly want to mount one? Last time Congress went through an impeachment, both chambers were controlled by the same party. After House Republicans in 1998 enthusiastically approved two articles of impeachment accusing Clinton of lying to a grand jury and obstructing justice in the Monica Lewinsky scandal. The matter was sent to the Senate, which was also in the hands of Republicans, most of whom supported the impeachment (and conviction) of Clinton.

McConnell is renowned for his wily mastering of Senate rules—and for his willingness to bust norms for political gain. Though he has recognized the duty of the Senate to address—and not ignore—articles of impeachment, he may well have a trick or two in mind about how to conduct the trial.

This time, House Dems will be delivering articles of impeachment to a Senate controlled by a party loyal to Trump and hostile to the prospect of booting him out of office. So how committed will McConnell and his comrades be to staging a thorough and fair proceeding? Could they rig it in Trump’s favor? Given the Senate rules, they could try.

Any impeachment trial is governed by the Rules of Procedure and Practice in the Senate When Sitting on Impeachment Trials, which was last revised in 1986. These rules dictate the ins and outs of a trial to a great degree of specificity. They note that as soon as House impeachment articles are “presented to the Senate, the Senate shall, at 1 o’clock [on the] afternoon of the day (Sunday excepted) following such presentation, or sooner if ordered, by the Senate, proceed to the consideration of such articles.” The rules cite the precise proclamation the Sergeant at Arms must make once House manager of the impeachment appear in the Senate to present the articles of impeachment. They note how the chief justice of the Supreme Court must be told that he or she is to preside over a presidential impeachment and how an impeached official must be notified of his or her impeachment. (One method: leave “such copy at the last known place of abode of such person.”) And so on.

These rules do include provisions that could be abused by a party that controls the Senate to jigger the proceedings. During a trial, they say, the Senate can “make all lawful orders, rules, and regulations which it may deem essential or conducive to the ends of justice.” This reads like a blank check for mischief. A Senate majority possibly could vote to limit testimony or witnesses. Perhaps it could impose a time limit on the proceedings that would prevent a full airing of the case against Trump.

But isn’t the chief justice in charge? (Put aside the question of his possible bias for a moment.) The rules say he is, but on some matters he can be trumped by the party in control. They state that the chief justice “may rule on all questions of evidence including, but not limited to questions of relevancy, materiality, and redundancy of evidence and incidental questions, which ruling shall stand as the judgment of the Senate, unless some Member of the Senate shall ask that a formal vote be taken thereon, in which case it shall be submitted to the Senate for decision without debate.” (Emphasis added.) So if there is a debate over the introduction of a certain piece of evidence—say, Trump’s legal team raises an objection—the chief justice decides. Unless the Senate Republicans vote to overturn his ruling. The final say will go to the GOP.

The rules also allow the Republicans to keep much of the proceedings out of the public eye. Either the chief justice or a majority of the Senate can order that a committee of senators be established to “receive evidence and take testimony at such times and places as the committee may determine.” That can be done behind closed doors—though such a committee must subsequently provide the full Senate “a certified copy of the transcript of the proceedings and testimony.” The rules note that nothing prevents the Senate from “having the entire trial in open Senate.” But clearly a majority of Republicans could vote to conduct the trial in secrecy. (Most of the Clinton impeachment trial was public, but deliberations over the calling of witnesses and depositions taken of key witnesses were conducted privately. A bipartisan majority of senators voted to use excerpts from the videoed depositions instead of live witness testimony.)

The rules also note that the deliberations of the senators—the debate over whether Trump should be convicted or not—could also be kept from the public. The Senate has the right to “direct the doors to be closed while deliberating upon its decisions.”

At the GOP luncheon, McConnell told his Republican colleagues that a motion to dismiss the charges in a Trump impeachment trial—an idea floated by some Trump defenders as a way to short-circuit and quickly end the proceedings—would be determined by Chief Justice John Roberts. But the rules provide McConnell and his Republican majority latitude in other ways.

An impeachment trial is not straightforward business. The rules are not as well-established as those that cover federal trials. Important procedural questions can be presented to the chief justice. But the Senate rules essentially give the Senate the ability to reject key rulings of the presiding judge. McConnell is renowned for his wily mastering of Senate rules—and for his willingness to bust norms for political gain. (See Merrick Garland.) Though he has recognized the duty of the Senate to address—and not ignore—articles of impeachment, he may well have a trick or two in mind about how to conduct the trial—especially if he is bent on disposing of this controversy in a fast manner during holiday season. McConnell’s entire political career offers cause to suspect that his loyalty will be to a partisan outcome, not a fair process. And the rules of the Senate do not guarantee an impeachment trial will be free of McConnell shenanigans.