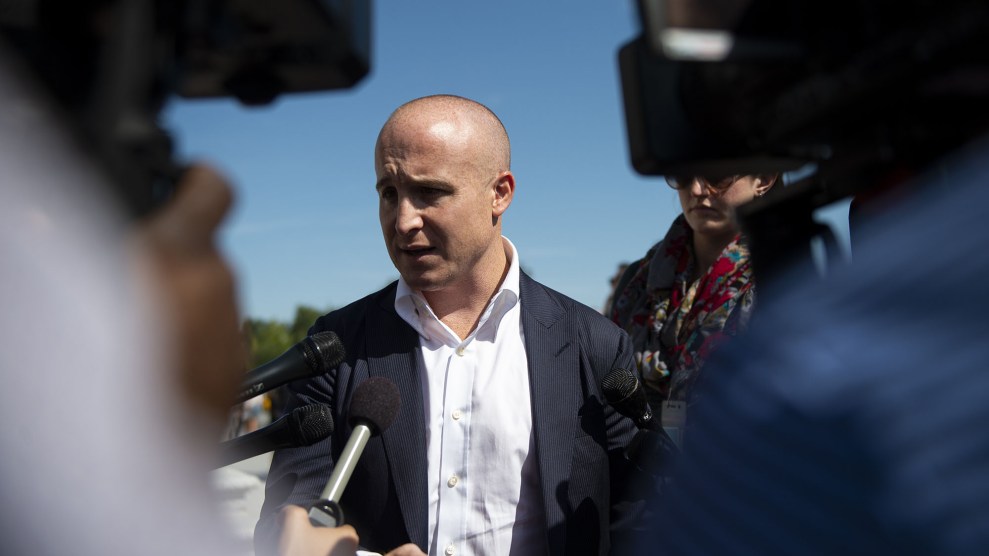 First-term Rep. Max Rose (D-N.Y.) had some big news to announce at his town hall on Staten Island Wednesday evening: split-tolling on the Verrazzano bridge had reduced congestion and shifted costs onto out-of-state drivers; R trains were running more consistently in Bay Ridge; and he had beaten back a Port Authority proposal to eliminate discounts for residents using any of the three bridges off the island. Staffers handed out leaflets explaining his position on various commuter-related issues, and officials from the Metropolitan Transit Authority and the local chamber of commerce were on hand to answer questions.

But first, some housekeeping. As a few dozen reporters, a Republican opposition research tracker, and a hundred or so attendees looked on, Rose announced that after much deliberation he had decided to “fully support this impeachment inquiry” into President Donald Trump’s attempt to coerce the Ukrainian government into investigating Joe Biden.

“If you look at the television, you just want to scream—if I had hair, I’d want to rip it out,” Rose said, announcing his support for an impeachment inquiry.

Rose, who knocked off Republican Rep. Dan Donovan last fall in one of the year’s biggest upsets, had been one of the final holdouts in the Democratic caucus after House Speaker Nancy Pelosi announced an impeachment inquiry last week. When a group of swing-district Democrats with national security backgrounds announced their support for an inquiry that week, Rose, an Army veteran, was not among them. Just a few weeks ago, he wrote an op-ed in the Staten Island Advance warning that a Trump impeachment would “tear our country further apart.”

But his comments on Wednesday were a reflection of just how quickly the ground on impeachment has shifted among Democrats of all stripes, and of how easy Trump has made it for cautious elected officials to get on board. As a representative from New York City’s most conservative borough, in a district Trump carried by 10 points, Rose has toed a moderate line in Washington and saved his rhetorical firepower for local issues. (This was the first of two town halls scheduled this week on commuting.)

But Trump’s alleged Ukrainian shakedown—and his subsequent, conspiracy-laden handling of the fallout—has made it possible for Rose to change his position without really budging from the safety of the middle-of-the-road. In his telling, it was less that Rose had come around on impeachment than impeachment had come around on Rose.

“If you look at the television, you just want to scream—if I had hair, I’d want to rip it out,” he said. He was stuck between Democratic colleagues who had prejudged the president before they’d even been sworn in and Republicans who have “suddenly…become deaf, mute, and blind whenever allegations against the president are brought up.” The White House, meanwhile, had “poured gasoline on the fire” at every opportunity.

But “the American people have a right to know if the president used his office to advance his self-interest,” and Trump, his personal attorney Rudy Giuliani, and Secretary of State Mike Pompeo were getting in the way by ignoring subpoenas and threatening Congress. For an Army veteran, the idea that Trump could have played games with national security demanded answers. “That North Star of mine has always been those soldiers who are willing to risk it all,” he said. And if Trump provided adequate responses, he’d be the first to say so.

This is not, suffice it to say, the Rashida Tlaib line. But it’s not what the Max Rose line was in September, either. For a Congress member who prides himself on standing between two factions (“I will take on either my fellow Democrats or Republicans if they try to score cheap points,” he promised on Wednesday), it reflected where his idea of the most reasonable path now stood. Trump’s defiance of anything resembling oversight and accountability has made an impeachment inquiry a safe position for moderates.

As if to confirm this new reality, Rose’s announcement was met with minimal dissent. A sizable faction applauded his stance, while one attendee interjected in protest. “Did you support Christopher Steele, a British agent?” a man asked. He was shouted down.

All that out of the way, Rose returned to the matter at hand—the work of serving and surviving in one of the top-targeted districts in the country. He called for the Sackler family to be thrown in prison for fueling the opioid crisis, chided New York Mayor Bill de Blasio for rolling out a ferry plan that excluded Staten Island, delved into the minutiae of barges and pier construction, and respectfully disagreed with a man who said he’d prefer Medicare for All to his union’s own plan. The president’s name never came up again.

Afterward, I met Sharon Weerth and Bob Zuckerberg (“no relation to Mark”), two Democrats who had showed up to listen to their Congress member talk about commuter issues. They were relieved that Rose had finally come on board, but they acknowledged the political straits he was in.

“I’m glad he announced something, because up until now he was kind of on the fence,” Weerth said. “So now he came out and he said he was he was for impeachment—”

But Rose, an ex-boxer, can still throw a punch when he wants. And right now, Trump makes a very easy target.