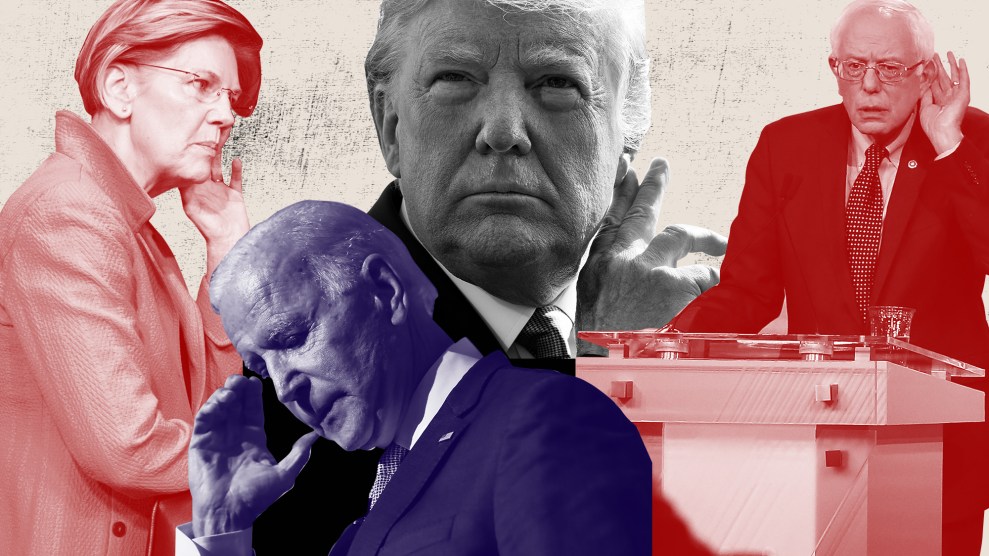 Over the past few months Bernie Sanders has often remarked that he’s in great shape. “I am blessed to have been in good health my entire life,” he told the Washington Post earlier this year. “I honestly can’t remember the last time I missed work because of illness.” I bought it: The guy seemed reasonably fit and sharp. Then, last week, he suffered a heart attack.

Given his age, it’s not all that surprising—about a fifth of men in their 60s and 70s have heart disease; by age 80, nearly a third do. On Inauguration Day, he will be 79, which makes him 40 years older than the oldest of millennials, his most devoted demo. That also makes him the oldest serious contender, but many of his opponents aren’t spring chickens, either: Joe Biden will be 78, Donald Trump 74, and Elizabeth Warren 71.

This grayest-ever crop of frontrunner candidates has made some people wonder whether there should be a legal age limit on running for president. Indeed, other fields turn aging employees out to pasture—commercial airline pilots, employees of the United Nations, and judges in many states aren’t allowed to practice into their 70s. So isn’t it conceivable that the presidency of the United States—by many measures literally the hardest job in the world—shouldn’t go to someone prone to senior moments? And if we have a lower age limit, why not an upper one?

Consider that Jimmy Carter, the oldest living president at 95, said recently, “If I were just 80 years old, if I was 15 years younger, I don’t believe I could undertake the duties that I experienced when I was president.”

I recently called up some other accomplished older people to see what they thought about an aging president. Their responses were not exactly encouraging.

A 96-year-old museum docent barked, “I have absolutely no interest in talking to you about that,” and hung up.

The oldest mayor in the United States—who is 80 and runs the city of Stafford, Texas—told me in an email that he would be “happy to visit by phone” but then never got around to calling me back.

After that initial round of interviews, you can guess I wasn’t exactly bullish about the idea of a president pushing 80. So I decided to check in with the experts: scientists who study how the aging process affects our bodies and minds. They painted a very different picture.

Nir Barzilai, an endocrinologist with Albert Einstein College of Medicine, studies the genes of a group of long-lived Ashkenazi Jews. Barzilai—who is prone to comments like “Age means nothing to me!” and “I know someone who just went to Machu Picchu for her 100th birthday!”—has been able to show that about 60 percent of the 100-year-old women he’s studied have certain unusual mutations in their growth genes. “We have discovered longevity genes,” he said. Unfortunately, he then added, “Do the candidates have them? I have no idea.”

Short of sharing a full genetic sequencing, Barzilai says that family history is a pretty good predictive factor. That bodes well for Trump, Warren, and Biden, whose parents all lived well into their 80s. But then what to make of Sanders, who has already outlived both of his parents by several decades (and is expected to make a full recovery from his heart attack)? Barzilai acknowledges it’s not just about genes; social and environmental circumstances also help determine how long and how well a person lives.

“We have discovered longevity genes. Do the candidates have them? I have no idea.”

I found out that more powerful predictors of both longevity and cognitive stability—more powerful than even genetics—are three external factors: education, race, and wealth. Countless studies have found a correlation between income level and lifespan; a 2016 study published in the Journal of the American Medical Association, for example, found that on average, the richest 1 percent of American men live 14.6 years longer than the poorest 1 percent; for women the difference is 10.1 years. That’s not surprising: Being wealthy means you have access to good health care and good control over your diet and exercise.

Relatedly, education level matters, too—and even more so along racial lines. In 2012, University of Illinois at Chicago gerontologist and public health researcher Stuart Jay Olshansky sorted deaths in the United States by age, race, and number of years of schooling. He found that on average, black men who hadn’t finished high school lived 14.2 years less than white men who had completed 16 or more years of education; for women that figure was 10.3 years. (It’s important to note that these racial differences probably have to do with lack of opportunity for African Americans, not any biological difference.)

Education also seems to have a strong protective effect against dementia: A 2018 University of Southern California study found that most people who have graduated from college can expect to prevent cognitive decline into their 80s, while people with a high school education often begin to experience it in their 70s. It’s not that education actually prevents the changes in the brain associated with dementia, explained Joe Verghese, another Albert Einstein gerontologist. Rather, education seems to help people compensate for those changes. “The theory is that people who are highly educated and intellectually engaged will be able to stave off the effects of this disease,” he said.

When you consider these external factors, good genes don’t seem as important. All of the presidential candidates are wealthy; all are exceptionally well educated. Take Sanders: It’s valid to speculate that perhaps one reason he has lived so much longer than his parents is that he has a college degree and robust finances, while his parents were poor immigrants who worked all their lives.

University of Illinois’ Olshansky used actuarial tables to calculate the lifespan and “healthspan” of each candidate—basically, the risk that they’ll die or become cognitively or physically disabled while in office. Taking into account wealth and education level he found that all the contenders stand at least a 76.8 percent chance of surviving their first term, most of them higher. (For most, the odds of living through a second term are also high, though for Sanders and Biden, they drop to 66 percent and 70 percent respectively.)

So it’s likely that by dint of privilege and circumstance, even the oldest contenders stand a pretty good chance of surviving the presidency. Fair enough. But that still left me wondering about their mental health and general with-it-ness. Would they, too, last?

“At 30 you might be mortified that you have spaghetti sauce on your shirt and you have to go a meeting. At 70, you might say, ‘Please excuse this, as you can see I was excited about the spaghetti I was eating!’”

The geriatric psychologists I talked to all assured me that contrary to popular belief, elderly people are no more prone to depression, anxiety, and other psychiatric disorders than their younger counterparts. Ellen Langer, a Harvard University psychologist who specializes in geriatric patients, railed against the stereotype of the socially weird old person. It’s not that their age-addled brains make them behave strangely; rather they’ve mastered the fine art of not caring. “At 30 you might be mortified that you have spaghetti sauce on your shirt and you have to go a meeting,” says Langer. “At 70, you might say, ‘Please excuse this, as you can see I was excited about the spaghetti I was eating!’”

In short, Langer says, life experience leads to perspective. And if you have those qualities, so what if you still think people listen to records? What are millennial staffers for, if not to show the president how to, say, use an iPad for briefing updates? (Speaking of millennials, maybe it’s time we rethink the requirement that a president must be at least 35, which hasn’t changed since Continental Congress delegate Tench Coxe wrote that the president “cannot be an idiot, probably not a knave or a tyrant, for those whom nature makes so, discover it before the age of thirty-five, until which period he cannot be elected.” Today, you could probably figure all that out from a 25-year-old candidate’s Twitter feed. And we know people can act tyrannical across ages.)

In any case, the gerontologists told me that age wouldn’t play a major role in their decision on Election Day. And their research suggests that setting a legal age limit for president probably doesn’t make sense—though that may end up being irrelevant: The way things are looking now, Americans won’t have much of a choice but to vote for someone who was born before there were zip codes or magic markers or antihistamines. That’s too bad, since there are signs that Americans are clamoring for younger, more diverse political leadership—see, for example, the upwelling of enthusiasm for Alexandria Ocasio-Cortez and her squadmates. And last year, when I was talking to voters about the 44-year-old African American Georgia gubernatorial candidate Stacey Abrams, I heard over and over from people who were thrilled to see a candidate that finally looked like them.

In this country, the same set of extreme social privileges that propel someone to the position of frontrunner presidential candidate also protect against the typical ravages of old age. And that single fact, for better or worse, is a stronger predictor of candidates’ health than any senior-moment gaffe they might have over the coming months. “It’s entirely possible,” Olshansky told me, “that some of these folks running for president are super-agers.” We should all be so lucky.