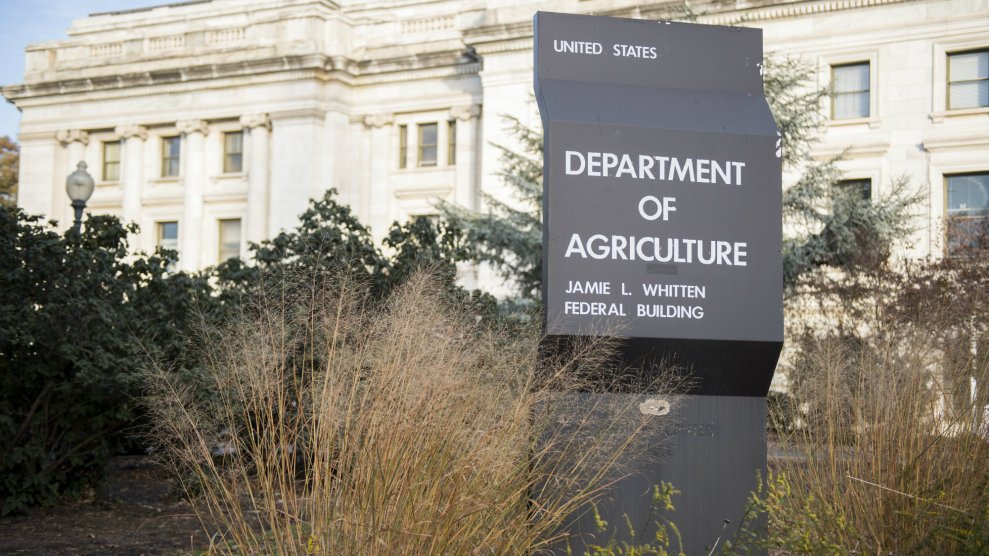 “It’s nearly impossible to fire a federal worker,” acting White House chief of staff and budget chief Mick Mulvaney told the audience at a South Carolina Republicans’ dinner in August. “I know that because a lot of them work for me, and I’ve tried. You can’t do it.”

But Mulvaney reassured his audience that the Trump administration seems to have found a loophole. “By simply saying to people, ‘You know what? We’re going to take you outside the bubble, outside the Beltway, outside this liberal haven of Washington, DC, and move you out to the real part of the country,’ and they quit,” he explained. “What a wonderful way to sort of streamline government and do what we haven’t been able to do for a long time.”

Mulvaney was referring to the June announcement from Department of Agriculture Secretary Sonny Perdue, when he told 181 staff members at the USDA’s Economic Research Service office that in just three months they would be relocated to new offices over one-thousand miles away in Kansas City, Missouri. The National Institute of Food and Agriculture, another small scientific agency at USDA, would also be moving to the midwest. ERS conducts research on agriculture and economics, and Perdue said the move would help the staff be closer to midwestern farming regions and save taxpayer dollars. In return, officials in Kansas City offered $26 million in incentives, but Perdue refused to disclose the details. The workers could either uproot their lives and move or lose their government jobs.

The announcement was met with shock. The deadline to decide whether or not an employee was moving to Kansas City expired on September 30, but the union negotiated the option for employees to request another 60-day extension. It appears that most had already made their decision before the deadline. Of the 181 employees told to relocate, only 16 did. Another 24 will remain in their positions in DC. But a whopping 141 employees, or 78 percent, left ERS completely. The relocation also resulted in the number of women working in research and administrative positions dropping. According to data provided to Mother Jones, women made up 36 percent of the employees before the move. Now, that number is down to 30 percent. The numbers are even more striking in Kansas City. Of the 27 people working there, only one is a woman.

“None of us believed it would happen,” Laura Dodson, the acting Vice President of the ERS union, told me. “He didn’t have the authority, it wasn’t backed by Congress, and every scientist in our field said don’t [move the office.]” The USDA inspector general issued a report saying that while Perdue had the legal authority to move the offices, congressional approval is needed before any agency can be reorganized. Perdue argued that that provision was unconstitutional and forged ahead.

Those who left were not necessarily giving up large salaries or a flashy job, what they did lose was security. The salaries for civil servants range from more than $19,000 to around $138,000, but federal employment also is accompanied by generous retirement packages and quality health care. Today, 364,000 federal government employees call the Washington, DC, metropolitan area home. Since Reagan insisted “government is the problem,” federal employees have been demonized by those on the right, and the Trump administration has been no exception. Donald Trump campaigned on “draining the swamp,” and that effort appears to include debilitating the civil service in government agencies. “It was done with malice,” Dodson argues. “They intended for us to leave.”

“It was done with malice. They intended for us to leave.”

One of those employees who opted to leave is Laura Tiehen, a senior economics researcher who had been with the agency for just over 20 years but did not want to retire. Tiehen recalls that she and her colleagues first realized something was amiss in August 2018, when the ERS administrator, Tiehen’s boss who was a career civil servant and not a political appointee, sent an email saying she was being relocated to a different USDA agency. “It was very clearly not her decision,” Tiehen explains, “tons of rumors were flying around.” Two hours later Tiehen received an email from Secretary Perdue. Their office would be relocating within a year, but he offered no details.

When the government shut down for six weeks at the end of 2018 into early 2019, Tiehen and her colleagues felt confident that the Trump administration would not be able to orchestrate such a move in what was becoming an increasingly short time frame. But then came the June 13 announcement that made it official. “You have about two-and-a-half months to pull up your roots, get your spouse a job, get your kids in school,” Tiehen says, “it was just an absolutely shock.”

“You have about two-and-a-half months to pull up your roots, get your spouse a job, get your kids in school.”

J. David Cox, the national president of the federal employees’ union the American Federation of Government Employees, said in June, “The USDA has provided no rational justification to employees, to Congress, or to its stakeholders for this move, which will make it harder for the agencies to coordinate with other science and research agencies,” He also called the relocation a “backdoor way to slash the workforce and silence the parts of the agencies’ research that the administration views as inconvenient.” Which, presumably would mean any research on SNAP benefits for low-income households or scientific research on climate change, both of which the ERS studied.

Tiehen has family members in Kansas City and contemplated moving, but her husband who works at the National Institutes for Health would have had to give up his job as well. “It was an agonizing decision,” she says about taking early retirement from a job she truly enjoyed. “Given the hastiness and recklessness of the move, it just didn’t feel like an agency where I’d still feel like I had a fulfilling job.” When she left, she was working on a database on how states are administering the Supplemental Nutrition Assistance Program, the food program for low-income and elderly people. “A lot of researchers rely on it,” she says.

ERS staffers work on studies that deal with agriculture, economics, and food security. The employees left behind dozens of unfinished reports and studies—some may never be completed. A memo circulated to ERS higher-ups, first reported by Politico, describes a large number of reports that will be delayed. Those studies include one that looks into food security for military veterans of working age, the impact of the opioid crisis, and the impact of food stamps in the post-recession era. The final decision was made so abruptly, that no plans were put in place to figure out how to finish certain projects.

“We all knew this move made no sense and was driven by ideology over science,” said Sen. Chris Van Hollen (D-Md.) in August. “Secretary Perdue has some serious questions to answer, and this fight is not over.”

In the past, the notion of decentralizing the federal government enjoyed some bipartisan support. “This idea has been used to make government work better, and sometimes it’s been used to destroy government,” David Fontana, a constitutional law professor at George Washington University says. Some conservatives like the idea because they see it as a way to slash government; progressives also have supported it as a strategy for spreading power and resources more evenly throughout the country. “It needs to be a deliberate process,” Fontana explains. “Not just why, but the where too. The process is different if you’re moving to Colorado, or Oklahoma, or New York City.” In contrast to the way this was handled at USDA, it would also be wiser to phase in the relocation and give employees an option, even if this means that the government would “create a new outpost and not ask anyone to move,” he says.

In shrinking the federal government, as in most things, the Trump administration has not opted for the incremental approach. And USDA isn’t the only agency Trump officials have disrupted. In July, the acting Bureau of Land Management director William Perry Pendley announced most of the employees at the agency would be relocated to Grand Junction, Colorado. Pendley has not been approved by the Senate for the role. As E&E News reported last month, the relocation announcement was met with disdain:

Not one of the more than 200 employees present expressed support for the move, exposing the true feelings of BLM’s Washington staff about the proposal announced in July and authorized by Interior Secretary David Bernhardt. Some employees wore black at the meeting as a show of protest.

Staffers questioned the wisdom, timing and purpose of the planned move, as well as the “moral courage” of their leaders. They complained of political motivations and a general lack of transparency: The agency still hasn’t told staffers exactly who will be asked to move.

But officials may want to rethink their plans to hastily relocate BLM employees. After the mass exodus, the administrators at ERS is now forced to ask certain employees to come back for a short period of time, and that includes Tiehen. She was asked to return “in the short-term to close some of the gaps” but is still deciding if she will. Meanwhile, the ERS office in DC is down to just a handful of people. “I was just walking through the halls,” Dodson says. “It’s empty. Everybody’s gone.”