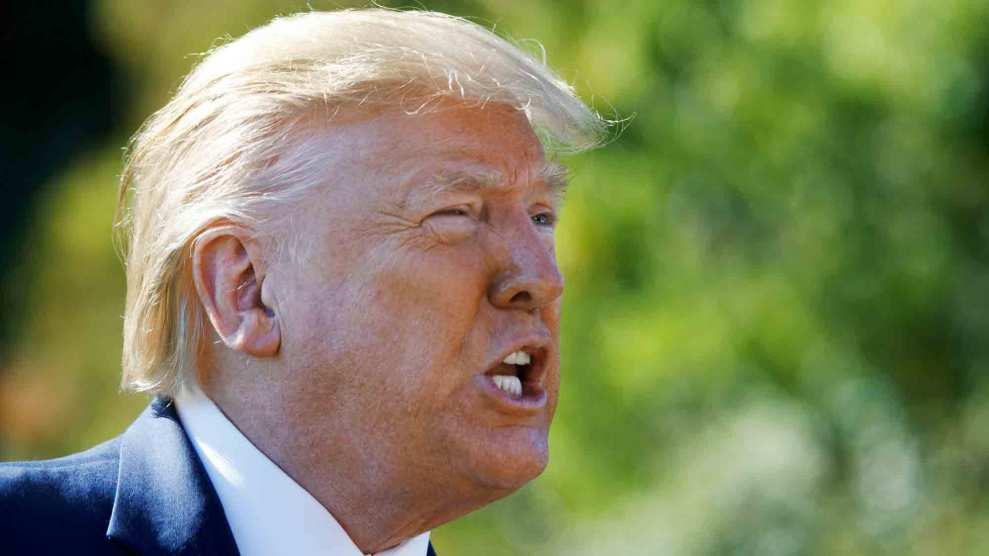 Donald Trump is at it again. In the face of new and damning evidence in the Trump-Ukraine scandal, he is making false claims and trying to mount diversions. On Wednesday morning, Trump responded to William Taylor, the acting US ambassador to Ukraine, who the day before presented testimony to Congress confirming the White House withheld security assistance from Ukraine in an effort to pressure its president to launch investigations to produce political dirt useful for Trump and his reelection campaign. Quoting a GOP member of Congress, Trump tweeted that no such thing happened. “Neither he (Taylor) or any other witness has provided testimony that the Ukrainians were aware that military aid was being withheld. You can’t have a quid pro quo with no quo.’ Congressman John Ratcliffe @foxandfriends.” And referring to the still-unidentified CIA official who had filed the complaint about Trump’s actions regarding Ukraine that triggered this scandal, he added, “Where is the Whistleblower? The Do Nothing Dems case is DEAD!”

Neither he (Taylor) or any other witness has provided testimony that the Ukrainians were aware that military aid was being withheld. You can’t have a quid pro quo with no quo.” Congressman John Ratcliffe @foxandfriends Where is the Whistleblower? The Do Nothing Dems case is DEAD!

Once more, Trump was trying to gaslight the nation.

Taylor had indeed testified during his closed-door session with congressional investigators that Ukrainian officials were aware Trump was withholding nearly $400 million in military assistance at the same time he and his minions were pressing Ukrainian President Volodymyr Zelensky to investigate a debunked conspiracy theory about the 2016 election (which held that Russia did not hack the election) and former Vice President Joe Biden and his son Hunter. Trump was also insisting that Zelensky announce publicly that these investigations were underway. Taylor was quite explicit about all this in his lengthy and detailed opening statement, which was leaked. In fact, the news that Trump was holding up the funds for Ukraine was reported publicly on August 29. Days later, Taylor testified, the top White House aide on Ukrainian matters, Tim Morrison, told him that Gordon Sondland, the US ambassador to the European Union and a key figure in this caper, had told Andriy Yermak, a senior Zelensky aide, that the security assistance money would not be sent to Ukraine until Zelensky committed to pursing the Biden investigation.

So there it is: a much-respected veteran diplomat who served in both Republican and Democratic administrations testifying that Sondland, doing Trump’s bidding, had threatened the Ukraine government: No investigation, no money. That’s extortion.

But Taylor had so much more to say. And his testimony shows there was more than one quid pro quo.

Throughout this spring and summer, Trump was using whatever leverage he had on Zelensky to force him to mount these political investigations. During this stretch, Zelensky and his aides desperately wanted a White House meeting with Trump—which would signal that despite Trump’s fondness for Vladimir Putin, the United States remained a strong partner of Ukraine, as it battled the Russian and Moscow-backed forces that had invaded eastern swaths of Ukraine. Yet Trump issued a condition: No investigation, no meeting. Taylor testified that he was informed that during a July 10 meeting between Ukrainian officials and top White House officials, Sondland told the Ukrainians that an Oval Office face to face between Zelensky and Trump was contingent on the “investigations.” (At that point in the meeting, John Bolton, then the national security adviser, abruptly ended the conversation, and top NSC official Fiona Hill told Taylor, according to his testimony, that Bolton later referred to this proposed arrangement as a “drug deal.”)

And Taylor had more to reveal about this. In September, Taylor testified, Sondland informed him that he, Sondland, had committed a mistake when he earlier had told the Ukrainians that a White House meeting between Trump and Zelensky was dependent on Zelensky publicly announcing these show investigations; instead, “everything,” including the withheld security assistance, was conditioned on such an announcement. Here was Sondland acknowledging there had been not one but two quid pro quos: the military money and a White House meeting, if Zelensky submitted to Trump’s demand.

Then there was the July 25 phone call between Trump and Zelensky. According to a reconstructed transcript released by the White House, when the Ukrainian president raised the subject of obtaining from the Trump administration more Javelin anti-tank missiles—which the Ukrainians could use against the Russian invaders in the east—Trump immediately responded with the now-infamous line: “I would like you to do us a favor though.” He then pushed Zelensky to investigate both that nutty theory about the 2016 election and “the other thing”—the Bidens. Trump and his GOP defenders have repeatedly said there was no quid pro quo in this call. That’s bunk. You want missiles? Then give me information I can use to clear the Russians and harm a political foe.

Add it up, and you have three quid pro quos. Or one huge quid pro quo with three distinct parts. The Ukrainians were looking for the security assistance that Congress had already authorized and the Pentagon had cleared for release. They desired a get-together in the Oval Office between Trump and Zelensky. And they wanted more Javelin missiles. In response to each of these requests, Trump said, first give me political dirt. And a crucial part of the deal would be Zelensky publicly proclaiming that the Bidens were under investigation, which in and of itself would taint Biden and create a controversy for him.

Taylor’s testimony is a strong indictment of Trump and the henchmen, including Rudy Giuliani, he used to muscle Zelensky. It details not an impetuous act but a monthslong campaign on Trump’s part to squeeze Zelensky, and Trump exploited US government policy and funds for this moblike extortion racket.

As for Trump’s reference to the whistleblower, that’s just Trump trying to change the subject. Though this anonymous CIA official who was detailed to the National Security Council kicked things off by submitting a complaint to the inspector general of the intelligence community, Taylor’s testimony, and the accounts of others who have appeared before the House Intelligence Committee, practically renders him irrelevant. Taylor’s opening statement matches the complaint and provides investigators an easy-to-read roadmap of where to go next: who to interview, what documents to seek. The whistleblower, in a way, is not needed at this point.

Trump and his gang will continue to ask questions about the whistleblower—with some pushing the notion that he is a part of the deep state plot to sabotage Trump—and raise other questions about how the investigation is being handled. (On Wednesday morning, a band of Republican House members stormed into a committee room used for classified and sensitive hearings in order to disrupt the deposition of a Pentagon official involved in Ukraine policy. They claim they were protesting the Democrats holding private interviews with witnesses, but there is nothing unusual about investigators conducting depositions in private—which was routinely done by the House Intelligence Committee when it was controlled by Republicans during its Russia investigation—and GOP members and staffers of the relevant committees are allowed to attend these sessions.) When the evidence is damning—and shows you’re a liar—assail the process. Or, in Trump’s case, declare black is white. In the Ukraine scandal, he is drowning in a sea of improper—and perhaps illegal—quid pro quos. Obviously, he and his cultists will stick with the playbook he used during the Trump-Russia scandal: Attack witnesses and investigators, distract with real or imagined side-issues, and deny reality. For the moment, though, reality may be catching up to Trump—and the investigation is not yet finished.