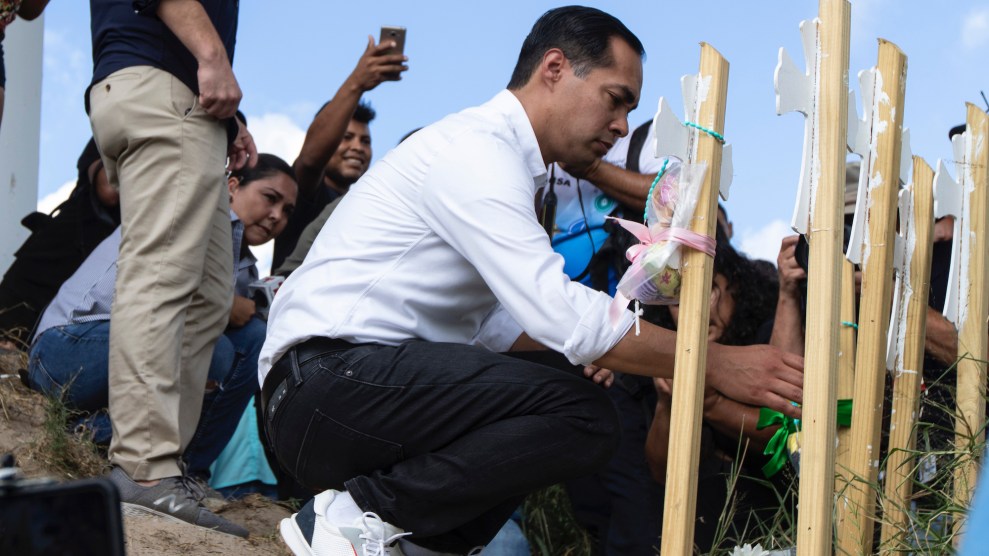 Democratic presidential candidate Julián Castro places flowers on the wooden markers of people who have died crossing the Rio Grande during his trip to Matamoros, Mexico, on Monday.Denise Cathey/AP

At the foot of a bridge in Matamoros, Mexico, roughly 1,000 migrants are sleeping in tents in a squalid, makeshift refugee camp. On Thursday, Mayela, the only trans women at the encampment, told me she feared for her life as she waited for her December court date across the Rio Grande in Brownsville, Texas. “I don’t want to become another statistic,” she said over WhatsApp. “Another one who showed up dead.”

When the Department of Homeland Security started forcing asylum seekers to wait out their cases in Mexico earlier this year, the department said it would exempt members of “vulnerable populations” on a case-by-case basis. In practice, getting out of the Migrant Protection Protocols, the policy’s official name, has proved almost impossible. Among the more than 50,000 people who have been forced back under MPP—or Remain in Mexico, as it’s often called—are pregnant women and members of the LGBTQ community. Reuters reported this summer that only about 1 percent of migrants subjected to the policy had been able to get out of it to fight their cases from within the United States.

“I don’t want to become another statistic. Another one who showed up dead.”

On Monday, Democratic presidential candidate Julián Castro went to Matamoros to try to get eight LGBTQ asylum seekers, a deaf woman, and three of her relatives removed from MPP. In an interview with my colleague Fernanda Echavarri, Castro called what he saw at the encampment a “humanitarian disaster.” The State Department tells Americans not to travel to Tamaulipas, the state Matamoros is in, because of crime and kidnapping. At least 343 people returned to Mexico under MPP have been threatened or violently attacked, according to an October report from Human Rights First.

Along with Mayela, I spoke last week with two other LGBTQ women stuck in Matamoros. A lesbian from Honduras, who asked to remain anonymous, sent a photo of a split lip that came from being hit in the face by an unknown assailant. Mari, a Cuban asylum seeker, said two men had threatened her and her partner, Dany, when they went to buy cigarettes. One of the men also grabbed her during the altercation, Mari said. They also faced discrimination from fellow asylum seekers. When the Cuban couple bathed in the Rio Grande, people moved away from them, and they kept their tent apart from the heterosexual migrants.

Mony Ruiz-Velasco, the executive director of PASO, a social-justice organization in Illinois, tried to remove the three women, along with three others, from MPP over Labor Day weekend. After Ruiz-Velasco explained to the Customs and Border Protection (CBP) port director why the group members were at risk, he agreed to take them into custody. “I’ve been doing immigration law for 20 years, and I’ve never been happy about someone being taken into custody,” Ruiz-Velasco says. But in this case, she was thrilled that they’d have a chance to get out of MPP. After she got back to Chicago, Ruiz-Velasco learned that all of them had been sent back to Mexico.

MPP gives individual CBP officials broad discretion over whether to allow people into the United States, but they’ve rarely exercised that authority. Asylum seekers can also get out of MPP if an asylum officer decides that they are “more likely that not” to be persecuted in Mexico, a much higher standard than the one used in regular asylum interviews, which only require that a person establish a “significant possibility” of persecution. And unlike those asylum interviews, migrants don’t have access to lawyers during the Remain in Mexico screenings or the right to appeal the decisions. The union that represents asylum officers has said its members are being forced to enact a policy that is “fundamentally contrary to the moral fabric of our Nation.”

Mayela told me that waiting in the United States—even if it meant being in a detention center—would be “a thousand times better” than the constant fear of being killed in Matamoros.

Mayela had similar experiences to the other LGBTQ women in Matamoros. In late September, a woman came to her tent and threatened to cut out her guts with a knife, according to a complaint Mayela submitted to the Mexican government. In the line for food at the camp, fellow migrants told her she had to wait in the men’s line and sometimes used slurs. Mayela told me that waiting in the United States—even if it meant being in a detention center—would be “a thousand times better” than the constant fear of being killed in Matamoros.

On Saturday, Jodi Goodwin, a Texas attorney leading much of the fight against MPP in Brownsville, accompanied Mayela across the bridge and into US custody. Goodwin learned the next day that the Department of Homeland Security was taking Mayela out of MPP. Mayela had passed her screening interview. It was the first and only time Goodwin has seen that happen in Brownsville. Instead of waiting in Matamoros, Mayela will be able to live with an aunt in Houston while she waits for her court dates.

On Monday, Julián Castro escorted Dany, Mari, and Melissa, along with the nine other asylum seekers, to the Customs and Border Protection officials stationed on the bridge. Like Mayela, they were taken into custody and interviewed about whether they were likely to be persecuted in Mexico. Hours later, all 12 were sent back to Mexico. The Texas Civil Rights Project, which has been working with the people Castro accompanied, said in a statement, “If these people—LGBTQ migrants who have been assaulted for who they are in the camps, disabled people, children—do not meet the criteria for ‘vulnerable populations,’ then the ‘vulnerable’ exemptions in ‘Remain in Mexico’ are lip service.”

“Now more than ever I’m convinced MPP is not about protecting us,” Dany told BuzzFeed News. “It’s about wearing you down so you don’t fight your asylum case in court.”